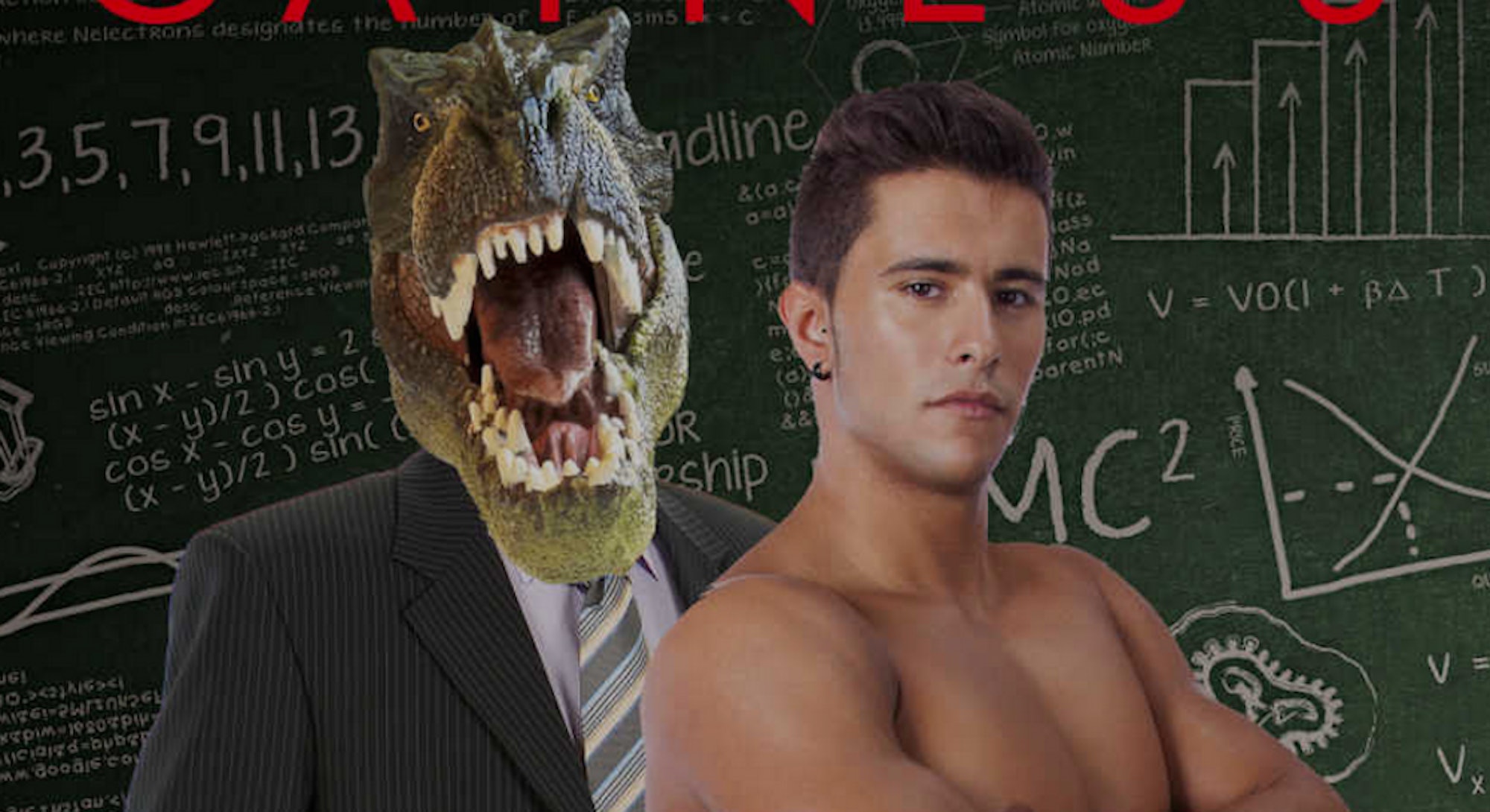 The Hugo Awards — one of the most important and prestigious awards in sci-fi and fantasy— just announced the 2016 finalists. (Previous winners include George R. R Martin, Neil Gaiman, Jo Walton, J.K. Rowling, and John Scalzi.)

This year’s slate is lined with many of the usual suspects like Stephen King and Pierce Brown, but there is one entry in the short story category that’s got everyone scratching their heads: Chuck Tingle, author of self-published dinosaur and unicorn erotica.

Now, this might sound like an amusing fluke, and to call it a conspiracy might sound like we’ve been reading too many sci-fi books, but there’s a very real possibility it is. See, the Hugo Awards aren’t selected by an elite team like the Pulitzer committee. You can be eligible to nominate an entry so long as you purchase a ticket to the World Science Fiction Convention.

For the past few years, a group calling itself the Sad Puppies tried to take over the awards and basically “Make Sci-Fi Great Again” by stamping out its pesky growing diversity. This caused a great deal of controversy, with everyone from George R. R. Martin to N.K. Jemisin speaking out about it.

Naturally, then, there’s a lot of speculation about whether Chuck Tingle is a Sad Puppies plant, so we contacted Tingle and asked for an interview, but the respondent said we could only send questions via e-mail. Unedited, here’s that exchange:

How did you find out you were nominated for a Hugo?

Got an email from some hot shot big timer said “hey Chuck we’ve got an award for you you want it?” I said “yes.” They said “Well okay Chuck here you go.” So thats how it happened it was a good day. Son even took me out for a big spaghetti dinner and I didn’t even spill, got two plates and a big glass of chocolate milk that’s the way the cookie crumbles.

Well not really, because I know that love is real and when you write that love is real the world makes proof. This is the way that science works and is the true billings reality. So I always knew this layer of Tingleverse would prove love is real. I just didn’t know how and then when it happened, I remembered that that is why. Can’t wait to win big time award and put it in the window so Ted Cobbler sees it and feels like a big dumb idiot. He’s gonna look so dumb.

Do you know about the Sad Puppies, a group of people who try to disrupt voting for the Hugo Awards every year?

Don’t know about any puppies but it’s BAD NEWS BEARS if you want to disrupt awards. That is a scoundrel tactic and probably part of Ted Cobbler’s devilman plan. Ted Cobbler is notorious devil and has been seen using dark magic to control puppies around the neighborhood. I do not support the devilman agenda but i think that Space Raptor Butt Invasion proves that LOVE IS REAL and no scoundrels can stop that. Especially not some dumb dogs.

Do you have any comments about the speculation that you might be involved this year?

Well speculation is a good word. I can comment on that because it means knowing something is going to happen like with a spell to see the future. So thats an important spell if you want to battle devilmen like Ted cobbler or Truckman. If I had specilation spell when I battled Truckman I probably wouldn’t have had to go to the hospital with a tummy ache.

Taylor Swift is an up-and-coming artist that is gaining a lot of big time fans in the underground. My son is a very big fan and I like to support smaller artists with a lot of talent so I just like to see what she is up to. If you haven’t heard of her, go check out her new songs FEELS LIKE 21 and SONG OF THE LAKE.

What’s the allure of dinosaurs?

Well first things first, dinosaurs are very handsome that’s just a fact, goofball. We all know T-rex are bad boys with nice ways probably say “hey buddy wanna ride on this motorcycle maybe come kiss in a DANGEROUS way?” So when I was younger in HOME OF TRUTH UTAH, I wrote stories about dinosaurs made me feel kind of weird. But I hid them under the floor and they got burned up in the big fire. Then I went to billings and didn’t think about dinosaurs for a long time until my handsome son said to write (very cool, has such a COOL style like a movie star or TOM HANKS). Now it’s all good days as a big time author.

You call yourself a doctor — what kind of doctor are you?

I am doctor of HOLISTIC MASSAGE with important degree from DeVry University. This makes me a smart man and world’s best author. I went to school for a long time on program called MICROSOFTS WORD and typed all kinds of things. Mostly these days i just help answer questions from patients on MICROSOFTS WORD. My son sets it up for me and he sends the questions off. He’s very handsome. He’s been working out a lot at the gym, mostly on calves, and he looks really great (in a normal way nothing weird).

Since the Hugo Awards have given you a spotlight, what aspect of your work would you like to draw attention to? What aspect do you think is most misunderstood?

Well most people think that Tinglers are just about books, like a story inside a book. That’s nice, because people get HARD when they read books like Space Raptor Butt Invasion, but being TINGLED is also outside of books. It’s all over the dang place. So right now when you read this interview, you are getting tingled in your chair, probably feeling good like a handsome buckaroo and you want to go trot on the street (to show off cute smile or abs).

THIS is what makes love real, not just inside books but OUTSIDE BOOKS too. Because the point of writing is to MAKE LOVE REAL and this is very important to remember when you think “what is man name of Chuck Tingle? is he best author in billings? in the world?” ANWSER is yes but also not just for writing but for being a TRUE buckaroo in all levels of the Tingleverse.