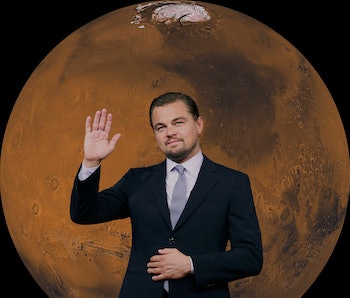 Leonardo DiCaprio has sailed on the Titanic, battled grizzly bears in the brutal Wild West, and explored dreams. Now, though, the 41-year-old actor says he’s going to travel to Mars — but for real.

Well, at least that’s what he told President Barack Obama.

DiCaprio was at the White House on Monday night as part of the South by South Lawn event. The actor, the president, and climate scientist Dr. Katharine Hayhoe took the stage towards the end of the evening for a conversation on climate change before the U.S. premiere of DiCaprio’s new documentary on the subject, Before the Flood.

The subject of Mars and SpaceX came up while Hayhoe was talking about the need to make people connect with the reality of climate change on a universal, human level. “The most important thing to do is not to pile up scientific reports until they reach a tottering pile of about 8 feet where they tip over and crush somebody,” Hayhoe said, explaining that what really matters when trying to motivate people to combat climate change thing is to connect its real meaning and impact to “what’s in our hearts.”

“The reality of it is, if you’re a human living on this planet — which most of us are, yeah?” she joked. “As long as we haven’t signed up for the trip to Mars. I don’t want to know if anyone has, I think you’re crazy.”

As Hayhoe expressed her belief that anyone who was on board with Elon Musk’s recently detailed plans for a possibly deadly trip to Mars was nuts, DiCaprio chimed in to say, “I did.”

Hayhoe attempted to assure the famous actor that she didn’t actually think he was nuts, but Obama jumped in.

“I think he’ll acknowledge he’s crazy,” the president said with a smile.

It’s unclear if the millionaire actor really plans on traveling to Mars and quite possibly dying in the process. Remember, though, Leo finally won an Oscar for his role in The Revenant, in part due to the brutal conditions he endured while filming it. Maybe, just maybe, he figured the only place tougher than frozen uncharted western territories is the Martian surface. The Academy would love it.

Earlier in the night, Obama made a Star Trek reference while talking about the importance of flawed but useful energy sources like fracking and nuclear power. “Until we invent the perfect energy source — Lithium crystals or whatever, Scotty’s there beaming us up — but until then we need to live in the real world,” Obama said.

More like this
Innovation
Jan. 25, 2023
Starship orbital flight: SpaceX successfully loaded the rocket with over 10 million pounds of propellant
By Mike Brown and Molly Glick
Science
Jan. 24, 2023
The Doomsday Clock is now at 90 seconds to midnight — here's what that means
By Kiona Smith
Gaming
Feb. 1, 2023
Star Wars Jedi: Survivor looks more powerful than you can possibly imagine
By Joseph Yaden, Mike Bloom and Willa Rowe
LEARN SOMETHING NEW EVERY DAY.
Related Tags
Share: