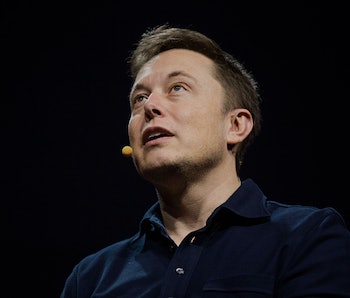 Elon Musk is really excited about starting a colony on Mars — so excited, that he sounds pretty blasé about the risks of the mission.

In an interview with The Washington Post this week, Musk was reportedly bursting with excitement, remarking about his need to restrain himself and save some details for a press conference he has planned in September. The billionaire’s company SpaceX has been making concrete progress toward its goal of putting humans on the way to Mars by 2025 — and he’s starting to flesh out his plans publicly for the future.

In his interview with The Post, Musk admitted that putting footprints on Mars in fewer than ten years might not be possible. He said reaching that deadline would not only require everything going according to plan, but the company to “get lucky.”

But if there’s one thing Musk isn’t worried about it, it’s his ability to find volunteer Mars pioneers.

Musk compared developing a settlement on Mars to the colonization of the Western hemisphere by Europeans centuries ago — “just as with the establishment of the English colonies, there are people who love that. They want to be the pioneers,” he told The Post. (We’re pretty sure that most of the Brits who came over to colonize North America were less driven by a love of adventure than a fear of religious persecution.)

The SpaceX CEO has previously said that the first trip to Mars was not one that he planned to be on, and he told The Post it will be “hard, risky, dangerous, difficult.” In fact, he’s not ruling out a total failure: “The first mission wouldn’t have a huge number of people on it because if something goes wrong, we want to risk the least number of lives as possible.” He might even be expecting it. Musk said in the same interview that “probably people will die.” But, he said, those deaths will “pave the way” toward his vision: “ultimately, it will be very safe to go to Mars, and it will be very comfortable.”

Musk has previously said that he sees Mars exploration as a necessary field of human innovation because “an extinction event is inevitable,” he told conference-goers three years ago. Eventually, he’s envisioning a self-sustaining city on the Red Planet.

Sold! Where can we stand in line to “probably” die in the name of comfortable travel to an uninhabitable planet?