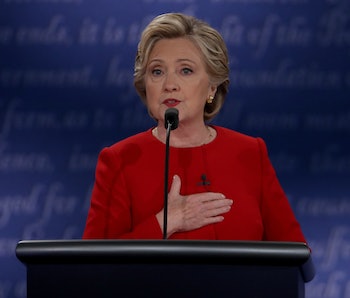 During Monday’s debate, moderator Lester Holt asked candidates Donald Trump and Hillary Clinton what they would do to improve United States race relations. Clinton replied that race has remained “a significant challenge” and that when it comes to the treatment of minorities in this country, the problem doesn’t just lay at the feet of police officers. Implicit bias is a problem for everyone.

“I think unfortunately, too many of us in our great country jump to conclusions about each other,” Clinton said. “And, therefore, I think we need all of us to be asking hard questions, you know, ‘Why am I feeling this way?’”

This isn’t the first time on the campaign trail that Clinton has said Americans must acknowledge their own implicit biases. The assertion is greeted as a welcome change in the way race is discussed by liberals. On the right, however, implicit biases are treated as an absurd assertion that everyone is racist.

What actually is an implicit bias? This is what nearly four decades of research tells us:

You Probably Don’t Realize You Have An Implicit Bias

Implicit bias is exactly that — implicit. It’s an unconscious mental process that’s activated automatically and primarily functions outside of a person’s conscious awareness. It’s considered a very powerful determinant of behavior because oftentimes it comes up even when a person truly believes that they are not biased or prejudiced against something. For example, even if you don’t explicitly endorse the idea that men are better at science than women, it’s possible that you may act in an unconscious way to perpetuate that stereotype. Implicit biases manifest differently among people, and are determined by a multitude of factors.

The idea that your own self can drive your implicit bias connects back to the idea of an ingroup favoritism — humans naturally seek out tribal affiliations because of an evolutionary-driven preconceived notion that you can trust this group. Culture creates an implicit bias because cultures perpetuate out-group stereotypes, while an affective experience (like say, being treated poorly by one member of a certain race) could determine a bias because the brain’s amygdala controls emotional learning and fear conditioning. Cognitive neuroscientists have found a link between neural activity in the amygdala and demonstration of implicit racial bias.

Finally, developmental history means that an implicit bias can form after an accumulation of personal experiences. These are social learning experiences and could also be passed on from your family and friends. Studies have found that children can demonstrate an implicit bias as early as the age of 6; children are positively correlated with the implicit biases of their parents if they have a positive attachment.

Implicit bias is usually tested in two ways. One is the Implicit Association Test which attempts to measure the attitudes and beliefs people usually are either unwilling or unable to report in other psychological measurements. An IAT asks people to associate concepts (like women or gay people) with evaluations and stereotypes (like bad and athletic). While some question the validity of the scores it has consistently been used by psychologists since the late 1990s.

We Don’t Know How To Cure Implicit Biases

So are we forever stuck being a little bit racist, or a little bit sexist, or a little bit intolerant of whomever isn’t like you? Psychological science says yes. Researchers haven’t been able to figure out how to end long-term implicit bias; the closest they’ve gotten to is diluting it for a mere 24 hours. While various researchers have tried different methods (taking the perspective of a stigmatized person, imagining counter-stereotype examples), nothing really sticks. According to a report from the White House Office of Science and Technology Policy, implicit biases appear to persist across time and generations. And that’s something that we should all be explicitly concerned about.

More like this
Science
Jan. 28, 2023
How does the placebo effect take hold? A doctor explains two influential factors
By Kathryn T. Hall. and The Reader
Mind and Body
Feb. 6, 2023
Overthinking? This New Kind of Therapy May Finally Provide An Antidote
By Elana Spivack
Science
Feb. 4, 2023
How The Last of Us Reveals a Deadly Truth About Fungal Infections
By Rebecca A. Drummond and The Conversation
LEARN SOMETHING NEW EVERY DAY.
Related Tags
Share: