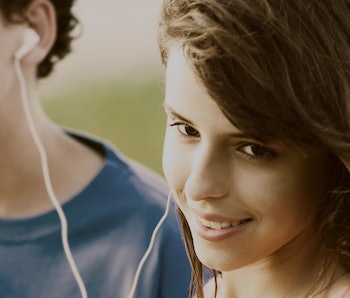 On Tuesday, Tinder and Spotify swiped right on each other for a hookup, and the two companies hope to create the most bangin’ IRL babymaking of all time.

By selecting an “anthem” through Spotify, Tinder hopes to match you and a sexy nearby singleton through the magic of common music tastes. Current Tinder users know that the original swiping app already had the option to link your Spotify account to Tinder; after Tuesday, the song you’ve decided is representative of who you are will allow you to, according to cheesy company execs, “maybe make a little music with someone new.” Bow chicka wow wow!

Incorporating music into online dating is a smart decision, actually. Studies consistently demonstrate how important music is to human bonding. This is partly because people believe they can figure out compatibility based on musical tastes. Think of music as a social badge of group membership — because of our proclivity to favor the ingroup (one’s own group) there is a natural bias to like people who enjoy the same music as you. Research demonstrates that there is a common bias in the judgement of musical taste and the stereotypes that come with each genre’s fandom act as a quick hack when deciding what you think of someone.

These judgements are carried into choosing who you want to get it on with. Studies show that music taste has a strong effect on romantic attraction: When musical tastes don’t align, it’s seen as indicative that personality traits will also not be compatible. Guys tend to find this especially true.

However, this whole business is easily hackable with “musical accommodation,” aka lying and saying you like the same jams so you seem more impressive. A 2016 study in the journal Short Research Report found that people were more likely to fit their music taste to the people they find most physically attractive.

“Nice and Slow”: Usher. (They’ll know you’re down but you also, like, want to be low key.)

“Side to Side”: Ariana Grande. (They’ll know you’re okay with walking funny the next day.)

More like this
Science
Sep. 28, 2022
In a first, scientists show that dogs can smell when humans are stressed
By Elana Spivack
Science
Sep. 25, 2022
Why do cats love cardboard boxes? Pet experts decode the obsession
By Tara Yarlagadda
Innovation
4 hours ago
Want a better relationship with your dog? Neuroscientists say these 7 factors are key
By Tara Yarlagadda
Related Tags
Share: