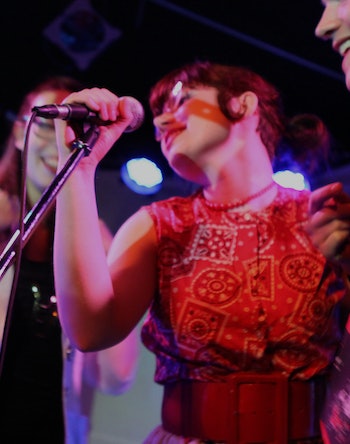 Where I went to college one of the most beloved rituals was this: every Wednesday seniors and the juniors lucky enough to be 21 would ride bikes out of our beachside town, down the coastline, through a marsh, and into a sleepy suburb. The 20-minute ride culminated at a bar called Old Town Tavern — pedaling through the night you could hear a call-and-response of “OTT” then “woos”, quasi vocal warm-ups for the event ahead. The standard reason for why students flocked to this haunt was karaoke. Why you really went was to drink with your friends and make new ones.

After Old Town Tavern burned down this summer, I had coffee with a friend to reminisce. It dawned on us that before we were pulled up on the stage together one Wednesday night to sing in an eight-person version of “(You Drive Me) Crazy” we had barely spoken to each other — we shared a few classes, we were neighbors, but we never talked. After we did karaoke we were friends. It seemed so funny that something as random as that would be the floor plan of a relationship.

But it really shouldn’t have come as such a shock — music is, intrinsically, a huge part of being human. Starting from birth we are soothed by music and socially connected by music. It manipulates our body into moving in such a way that you can say as much with a head bob as you can when you talk. And according to new research, singing is probably the fastest way to make a friend. Goodbye trust falls, hello karaoke.

In a study recently published in Royal Society Open Science, experimental psychology researchers from the University of Oxford studied and compared the bonding process between adults participating in either singing, crafts, or creative writing classes.

“We were interested in how humans create and maintain relationships, and whether certain behaviors might facilitate community cohesion,” says co-author Eiluned Pearce, Ph.D., to Inverse. “We suspected that singing might be a bonding behavior because it is so often performed in synchrony and involves some muscular exertion, and these attributes have already been linked to social affiliation and release of chemicals in the brain called endorphins, which seem to underpin the social bonding process.”

As the subjects attended their different classes over the course of seven months, they were asked to rate how close they felt to their class as a whole on a seven-point scale. While Pearce and her team hypothesized that those in the singing classes would feel closer to each other compared to the others, they found that it wasn’t true. At the end of the seven months all the classes were reporting similar levels of closeness — but the catch was that the subjects in the singing classes felt closer to each other much quicker than the others. Singing broke the ice and super-charged the speed that everyone became friends.

Take for example, Bethany Scribner, who works for Brooks Sports as a “guru.” (Background: Brooks is a running company and “gurus” manage accounts and build relationships with retailers that sell Brooks products.) She’s based in Southern California, but her colleagues dot the map: from Texas to South Dakota to New York.

“With our jobs being remote with our own respective territories across the country, it’s possible to really only have a few hours over the course of a year to connect with your coworkers,” Scribner tells Inverse. “There are some gurus I only see a few days of the year that I consider some of my closest friends. I believe, without a doubt, karaoke has had something to do with that.”

Scribner says that karaoke is a long-standing tradition for the company — there’s a company-wide sales meeting twice a year and everyone knows that one night will be devoted to getting up on stage and playing rockstar. It’s part of the company culture so much that it’s joked that you won’t get hired if you don’t have a karaoke song ready and waiting.

On a recent weeknight at a karaoke bar in Manhattan’s East Village, Ray Melencio, a 24-year old aspiring improv comic who’s in sales by day, readily testifies to the power of karaoke as a way to bond people:

“There’s just something about belting out some Billy Joel or R. Kelly with people you barely know that makes you bond in a way that other activities can’t replicate,” Melencio says.

Melencio had begun working with a new improv ensemble that week and the group was in need of an ice-breaker. By the end of the night, everyone in the newly formed group was hamming it up and belting out songs in unison.

“When the night came to an end we made it a point to exchange information and honestly, I’m more excited to work with these people than other groups I’ve been matched with before.”

Pearce and her researchers found that people in singing classes bypassed the need to know everyone in the class individually, and created feelings of positivity toward everyone. (It was group bonding at its finest.) That bonding came from synchrony — synchronized movements that caused the release of endorphins, which facilitates bonding. But music still has the power to affect the psyche, even when synchrony isn’t involved.

While babies can’t synchronize their external behavior — researchers aren’t sure if it’s because they lack the physical or mental capability — a study released in October by the University of Montreal found that babies are twice as calmed by singing as they are calmed by talking — regardless if the baby has heard the language before. Singing, the researchers realized, helped infants develop the capacity for emotional self-control.

The idea that singing carries more weight than speech has gained traction through years of research among archaeologists and psychologists. It’s been a long time coming: New studies from the University of Montreal and the University of Oxford add further evidence that song underlies both the evolutionary origin and the development of human language. We learned how to sing in part from birds, and we’ve used it to craft societies. It all makes you a bit more appreciative of the time your drunken coworker asked you to duet.

It’s been three years since I last sang karaoke at Old Town Tavern and the memories are rich, if hazy: That time so-and-so closed out the night with three country ballads; that night we crowd-surfed someone off the stage. I’m sure we sounded awful but luckily enough it doesn’t matter how good your voice is when it comes to building bonds. All you have to do is show up for karaoke night, and years of evolution and psychological progression will do the rest.