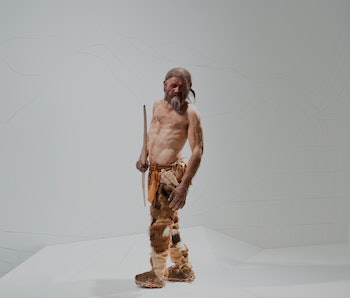 Twenty-five years ago Monday, two German tourists stumbled upon a frozen corpse while on a mountain hike in the Italian Alps. The sight of its mummified body was surely disconcerting. They must have thought of the victim’s family, and if they ever knew their kin’s fate. They could not have known, at least yet, that they had stumbled upon what would become one of archaeology’s most significant treasures.

The corpse was later nicknamed Ötzi, for the Ötztal Alps; his name was later simplified to just “The Iceman.” In the 25 years since he was released from his frozen grave, Ötzi has been pretty busy. A quick Google Scholar search pulls up 1,500 references to our Copper Age cousin. Every inch of his mummified body has been closely examined with the array of tools at the disposal of modern science. He’s now entombed in a frozen chamber at the South Tyrol Museum of Archaeology in Italy, where visitors can peer in through a small window.

Here are some of the amazing things we have learned about the European Homo sapiens of 5,300 years ago, thanks to Ötzi.

Violent crime was a problem

The price of Ötzi’s gifts to science was murder. Originally, scientists believed that he died cold, hungry, and exhausted on the mountainside. That theory fell apart when a further search turned up an arrow in his left shoulder. It hit an artery. He probably bled to death within minutes. Ötzi also had a significant stab wound on his hand. The Iceman had eaten shortly before his death, disproving the idea that maybe he was pursued and hunted. Instead, it’s likely he was ambushed by some enemy faction. The identity of his killer is still unknown.

They had pretty sweet tools

Whoever killed Ötzi either wasn’t after his stuff or didn’t have time to collect it. His camp was very well stocked, and the Iceman knew how to build and maintain the tools he needed to eat and survive in his alpine environment. He even had a first aid kit. At the time of his death, Ötzi was equipped wit one copper axe, bound to a yew wood handle with birch tar and leather; one unfinished longbow, made of yew, that the Iceman was working on with his axe, possibly to replace a broken or lost one; one deer hide quiver containing 12 arrow shafts and two complete arrows; one flint dagger, with an ash wood handle; one “retoucheur,” the only known tool of its kind in the world, that was built like a pencil, with a sharpened stick from a lime tree and hardened deer antler for lead, which was used to sharpen and maintain the flint dagger; two birch bark pots, stitched with fibers from a lime tree; one backpack, framed in hazel rod; one stone disc attached to loops of hide, used to hang dead birds off a belt after a successful hunt; two pieces of birch fungus, threaded with hide, that were probably used as medicine, as the fungus has been used historically as an antibiotic agent.

Hanging out in the snow and ice requires proper clothing, and Ötzi had it all figured out. He wore a sheepskin coat, stitched with sinew and likely held closed with a belt. He had leggings, a loincloth, and a belt made of leather from domesticated sheep and goat. His shoes were a feat of engineering: The inner shoe was a netting of lime tree fibers, which held in an insulating grass stuffing contained by the deerskin outer shoe and sole. A bearskin cap with a chinstrap kept Ötzi’s head warm.

They were into body ink

Ötzi had tattoos. Lots of them. In all, scientists count 61 pieces of body art on the Iceman’s corpse, likely using charcoal as pigment. They are made of simple vertical or horizontal lines, leading researchers to the conclusion that they weren’t for fashion — or at least, not exclusively. The leading hypothesis is that they were either a diagnostic tool, or a treatment in themselves, possibly a form of acupuncture. Ötzi’s ink was concentrated on his joints and spine, places where his bones revealed signs of degeneration.

Life was hard on them

Speaking of degeneration, Ötzi was in rough shape when he met his end, at approximately 45-years-old. In addition to joint pain and a bad lower back, Ötzi had severely hardened arteries and Lyme disease. He had gallstones, parasitic worms, tooth cavities, and dangerously high levels of arsenic in his system. A growth on his baby toe suggests a brush with frostbite. It’s amazing he lived long enough to be murdered.

They ate a balanced diet

Life was hard for the Iceman, but even to his end, he ate pretty well. Samples from his stomach and intestines showed that Ötzi chowed down on ibex and deer meat, as well as grains and seeds. His diet was carbohydrate-rich enough to cause significant dental decay. Unplanned or not, his last meal was fit for a man not long for this world.