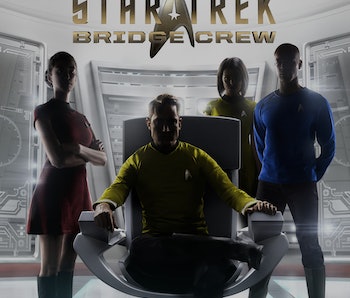 I cannot stand taking orders. I didn’t join ROTC in college because I resent being told what to do. But when my ship’s captain told me to “Punch it!” in order to activate our jump to hyperspace, I felt a rush no roller coaster could ever give. Star Trek: Bridge Crew, a VR game coming out in November from Ubisoft, is the closest anyone will get to thrilling do-or-die scenarios that feels cinematic and spontaneous. It might also be the most complex party game ever made.

When Ubisoft announced Star Trek: Bridge Crew at E3, the marriage of Gene Roddenberry’s sci-fi staple and VR seemed like a match in sci-fi heaven. Of course there should be a virtual reality Star Trek game, of course it should be a ship simulator. But VR’s novelty fades when any game fails to fulfill the utmost important objective: Being fun. Thankfully, Star Trek: Bridge Crew is in fact a lot of fun. It simply requires a kind of effort, coordination, and communication that Halo or Dota 2 never really ask for. You’re not playing to win here, you’re playing to survive.

While at Star Trek: Mission New York at the Javits Center last weekend, I spent some time with Bridge Crew: Up to four (4) players take positions on the U.S.S. Aegis, whose mission is to find a new world for the Vulcans after the destruction of their home planet (Bridge Crew occurs in the continuity of the new films). The ship is exploring an uncharted area of space called the Trench, to which the Klingon Empire claims a heavy, but unrecognized presence.

The booth’s exhibitor took point as Captain, because of course he should, while he assigned posts to myself and two strangers in line: One took Tactical (firing the guns) while another took Engineering (ensuring our ship survives). I was assigned Helmsman, as in the pilot, and as the only Asian dude in the group I was oddly happy to actually feel like Sulu. When I looked down to see my avatar in John Cho’s gold shirt, my theatrical/role-playing habits kicked in. I caught myself calling our captain “Captain,” and not his real name.

While I’m unsure what the game’s final presentation will look like, it wasn’t long after I strapped on the Oculus goggles before I was thrust into a tutorial that felt a tad overwhelming. The controls themselves were simple — it’s all touching and poking — but knowing what the doodads on the console do, not so much. Using the Oculus controllers, all palms face down with index fingers “clicking” shoulder buttons to simulate poking the console. I never realized how much piloting a starship resembled typing on a desktop.

Because of my short time with it, I can only speak on the role of Helmsman. Piloting felt less like an aviator game such as Ace Combat or Star Fox and more like a first-person shooter. The starship’s yaw is controlled on the right-hand console while its pitch and vertical positions are controlled on the left. To the far left is the ship’s thrusters, which the Helmsman has to really reach out to grab. But the jump only works when Engineering maintains the ship’s fuel systems, which brings up how crucial team effort is in Bridge Crew.

I began thinking of Bridge Crew less as a simulator and more like a multiplayer RPG. (The final game will have solo player options, but how that works was never explicitly explained.) Everyone in Bridge Crew literally plays a role that’s only a few notches above archetypes like “Mage” or “Fighter.” In so many RPGs like Dungeons & Dragons and Final Fantasy, it sometimes doesn’t matter how diverse your party is so long as everyone’s stats are good. Here, stats don’t even exist, and everyone matters.

Engineering can’t slack off because if they do the guns stop working and the fuel runs out. Helmsman needs to be aware of enemy positions, which is hard to do when the range of vision is limited to the big screen, so they must pay attention to their console radar. Tactical needs to know how to goddamn aim. The Captain has to issue orders based on priorities. There simply cannot be any lazy meat on the bridge. If there is, everyone’s doomed.

In my demo, the Aegis barely survived, but still escaped the Klingons. We also lost 12 of 18 total redshirts — the game has a varying amount of shipmates who survive or die, which is a gauge to the Bridge Crew’s success/failure. It’s also cinematic and visually powerful. My crew all had an uncomfortable laugh when one redshirt flew across the bridge and laid there for the rest of the mission.

When it was over, I had a chance to make small talk with my crew, all survivors. I learned where they were from, and we followed each other on Instagram. We felt like friends even though we spent less than 20 minutes together. I shook the hand of our Captain, the Ubisoft rep, with formality as if he were actually my captain, and he told us we were one of the more cooperative parties that day. Other groups, he said, fell into chaos or panicked. After playing Star Trek: Bridge Crew, I could see why: You could be a fan of Trek for 50 years, but this was the first time it has been a real thrill.

More like this
Gaming
15 minutes ago
Everything we know about New PlayStation Plus, Sony’s revamped gaming subscription
By Joseph Yaden
Gaming
5.15.2022 2:30 PM
2022 game releases: The 14 biggest games launching this summer and fall
By Bryan Lawver
Gaming
5.14.2022 4:00 PM
All 48 Genshin Impact birthdays, from January to December
By Jess Reyes
Related Tags
Share: