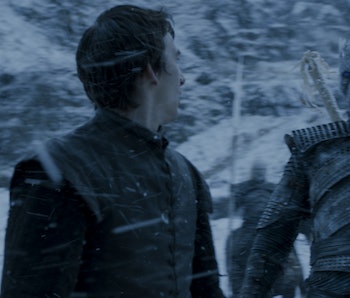 The Game of Thrones writers have proven that, beyond the books, they’re not great at character or pacing. Season 6’s new territory has included amateur writing missteps like Arya’s inconsistent characterization, the pointlessness of Jon’s resurrection, and plots that are a mixture of dragging (Braavos, Meereen) and oddly rushed (the Riverlands). The most recent episode “No One” made one thing clear: Though the show’s writers do an admirable job of trimming the fat of George R.R. Martin’s world, they’re flailing when it comes to their own plotting and characterization.

But all is not lost: They remain masters of large scale-battles. Season 5’s “Hardhome” was largely improvised by the show, and Bran’s encounter with the army of the dead in this season’s “The Door” was already a standout chilling moment.

The obvious solution, then, is to have winter fucking come already. People have been ominously muttering it since Ned Stark first did in the pilot. The army of the dead has theoretically been advancing since Sam ran from them at the end of Season 2. It’s time for this slow-moving army to pick up its pace and rescue the plot.

Season 6 has faltered when it relies on Daenerys for emotional moments — failing to notice that she is not a nuanced character nor do her scenes introduce anything new — or when it spends too much time on Ramsay being evil for the 666th time, or when it makes Arya’s plot feel aimless.

The writers aren’t doing so hot with the humans, but if they acknowledge their strengths, the season is salvageable. Bran’s scene with the Night’s King in “The Door” was heart-pounding and exciting, and Hodor’s death gave it a much-needed emotional punch. Game of Thrones writers, forget Ramsay’s boring sadism — kill him off in the Battle of The Bastards — and accept that Meereen is a black hole of interest and shove it out the same Moon Door that you shoved Dorne.

Bring in the dead in the season finale “The Winds of Winter” and the show will be back on track.