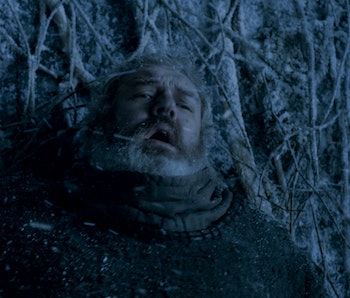 The most recent Game of Thrones episode packed an unexpectedly devastating punch. Who knew the plight of a one-note character who only ever says one word could turn out to be so damn tragic and moving? But though Hodor is almost certainly dead, we didn’t see his lifeless body onscreen. In TV world, that means he could stand a fighting chance. Maybe. Let’s take a look at some previous Game of Thrones offscreen deaths to determine if this is a merely false hope or a true possibility.

Going out of Season 5, Stannis was the biggest “is he or isn’t he” death, aside from Jon Snow. Though we saw Brienne raise her sword, the event itself didn’t play out onscreen. For such a major character, this was an anomaly — which is why there were plenty of “Stannis Lives!” truthers after the scene.

The verdict: Brienne confirmed the deed once and for all in “Book of The Stranger.” He’s dead.

After he sustained grave injuries in his epic Season 4 fight with Brienne, Arya left The Hound to die alone in the mountains. We never saw him draw his last breath, but we also haven’t seen him since.

But Ian McShane, who is playing a new character this season and evidentally gives zero fucks about PR, basically confirmed his return in an interview, Rory McCann has been spotted on the set, there’s a precedent in the book for The Hound being a continued presence in the story, and Arya made a recent Checkov’s gun reference to her old friend. Not to mention, Cleganebowl still needs to happen.

The Verdict: Though it hasn’t been proven definitively yet, he’s still kicking. He’ll be back.

Ned Stark’s mysterious brother hasn’t been seen since he disappeared on patrol for The Night’s Watch in Season 1. We’ve seen neither hide nor hair of him since, but he and his nephew Jon were close enough that Jon’s would-be murderers used him as Jon-bait at the end of Season 5.

The Verdict: This one is truly unclear. It wouldn’t be unprecedented for the show to never mention him again and clear up the issue — but since The Three-eyed Raven is no longer around to confirm Jon’s parentage with a convenient flashback revisiting the Tower of Joy, perhaps it’s time for Benjen Stark to come forward and have some words with Jon.

Arya’s direwolf hasn’t been seen since Arya scared her away to spare her life in Season 1. And between Shaggydog and Summer, the show has been on a direwolf genocide kick of late. Her future does not look good.

The Verdict: Direwolves forever, bitches. Game of Thrones has been far too wolf-killing of late, but make no mistake, it’s just a red herring. Nymeria will outlive everyone and we won’t be convinced otherwise.

Where does this leave Hodor?

His plight is not an extreme mystery like Benjen’s, nor a drawn-out slow acting wound like The Hound’s. We’re going to go the Stannis route and pronounce him truly, irrevocably dead — though the intriguing implications of the time-loop nature of his predicament will live on in the story.

Farewell, Hodor. You held that door with honor until the very end.