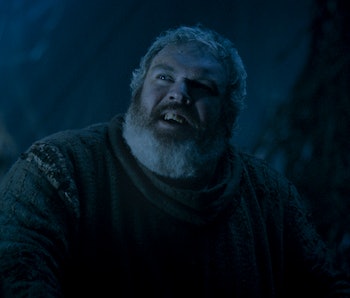 Thanks to the most recent episode, Game of Thrones fans will not be able to hold doors without feeling unreasonably sad from now on. But the “Hold the door…Hodor” reveal wasn’t just an unexpectedly gutting payoff on a character arc we barely knew was in motion before Season 6. It was also a game-changer for the show. The revelation that Bran Stark can use his visions to connect past and present in a closed time loop has a host of implications for the narrative moving forward. Time paradoxes can be confusing as hell, though, so we’re here to help you break them down. Here’s what this Hodor development means.

Game of Thrones is a determinist universe

The second is the Harry Potter kind, where everything that happens has already happened. So if you’re changing the past, it means you already did it. Think Prisoner of Azkaban when Harry sees someone who shares his likeness, assumes it’s his father, and is therefore reluctant to act later, waiting for his father to arrive… until he realizes he saw himself. He knows he must act, because he already did it.

With Bran’s wharging into Hodor and giving him brain damage in the past, Game of Thrones falls squarely into the second category. Hodor’s fate is inevitable because it already happened. Game of Thrones has featured a lot of prophecy and portent, but it’s never truly taken a stance on them. We can chose to believe Cersei’s children are dropping like flies because that witch told Cersei it would happen when she was a teenager — or we can go the Jaime route and disregard prophecy. It’s happening because when you play the Game of Thrones, you win or you die.

But with “The Door,” the show is taking a definitive stance and clarifying, once and for all, that it’s a determinist universe.

Bran might have a hand in other plot developments

If Hodor’s Hodoring was always him responding to Bran’s inadvertent mind-scramble, what other present events aren’t what they seem? One Reddit user posited that when The Mad King went crazy and said “Burn them all,” he too could have been responding to some unseen query Bran Stark inadvertently triggered in the past.

When the mysterious red priestess Kinvara unnerves Varys by recalling the “voice in the flames” he heard on the night of his castration — what if Bran Stark was that voice? Plot twist: could Bran be responsible for some of the actions that have been attributed to the Lord of Light?

This is admittedly unlikely, but bear with us. If Hodor’s plot line is a closed time loop, what’s to stop Bran’s from being one too? When the Three-eyed Raven tells Bran, “it’s time for you to become me,” we interpret that figuratively, as Bran taking his place. What if he meant it literally, though? What if, through the same time-fuckery that allowed Hodor to become Hodor, Bran and the Three-eyed Raven are one and the same? Or even more unnervingly, that man who became the first White Walker.

Though his hair is lighter than Bran’s and he’s clearly standing upright on two legs, this Hodor reveal means we can’t rule anything out. Game of Thrones just changed the game for the rules of its established universe — and anything goes now.