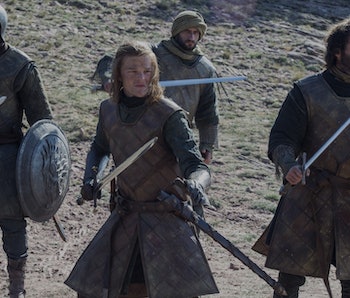 “Oathbreaker,” the third episode of Game of Thrones sixth season, gave us our first onscreen look at the Tower of Joy. If you’re only a casual viewer who doesn’t read the books or spend much time chasing fan theories down internet rabbit holes, you’re probably confused why the Internet is going crazy over a five minute scene. Sure, it was cool to see Young Ned Stark, and that guy with the two swords was a nifty fighter, and it was a kick for Black Sails fans to see Woodes Rogers with Ned Stark — but the tower itself was fairly nondescript and the scene cut short before we could learn much. What gives?

Ned Stark was known for his honor. It’s why he was unable to survive a full season in the world of Game of Thrones, and it’s why its never quite rung true that he’d cheat on his wife to produce Jon Snow. For years, fans have theorized that Ned isn’t actually Jon’s father, but his uncle — with Jon’s true parents being Rhaegar Targaryen and Ned’s sister Lyanna Stark. You’ve probably seen this theory written in shorthand as R+L=J.

The theory posits that Ned lied to the entire world (including Catelyn) to protect Jon’s identity, because having a legitimate Targaryen claim to the throne under the Baratheon and Lannister rule would have been fatal for baby Jon. In “Oathbreaker,” it’s significant, then, that as Bran watches Ned fight Arthur Dayne he says, “I’ve heard this story a thousand times,” then his smile fades as the scenario fails to play out as Ned had always told him. Ned lied about defeating Dayne; instead, he lost his sword and only survived because his man, Howland Reed, stabbed Dayne in the back. To rub salt in the wound, Ned, who prided himself on the phrase, “the man who passes the sentence should swing the sword,” then dishonorably beheads Dayne after rightfully losing the fight.

The evidence of such a large lie — such an out-of-character act of dishonor — offers proof that Ned would also lie about something else. Something like Jon’s parentage and the circumstances of his birth.

The Tower of Joy

So what exactly is the tower? When Isaac Hempstead-Wright, who plays Bran Stark, spoke to Inverse, he told us the tower is a “special location” where we will learn “cool and earth-shattering” information.

A quick Westerosi history lesson: during the Mad King’s reign, his son Rhaegar Targaryen fell in love with Ned’s sister Lyanna Stark — despite the fact that he was already married to Oberyn’s sister Elia Martell and Lyanna was betrothed to Robert Baratheon. Ned and Robert discussed this back in Season 1, and Littlefinger and Sansa discussed it again in Season 5.

Rhaegar took Lyanna to the Tower of Joy in Dorne, which sparked a war that eventually led to Robert Baratheon’s ascension to the throne. Think along the lines of a Helen of Troy narrative: depending on which version of the story you hear, Rhaegar abducted and raped her or Lyanna went willingly.

Naturally, neither the Starks nor the Baratheons let that stand. As we learned last night, Rhaegar Targaryen did not emerge from the ensuing battle alive. As Ned asked Arthur Dayne in “Oathbreaker,” “Rhaegar lies beneath the ground. Why weren’t you here to protect your Prince?” and Dayne responded, “our Prince wanted us here.” If Arthur Dayne was such a legendary fighter, what could have made Rhaegar fight a battle without his best man by his side?

Though you could almost hear millions of viewers yelling “nooooo!” as the Three-eyed Raven cut the scene short and yanked Bran out of the vision, thanks to the books, we know that once he ascended the tower, Ned was greeted with the sight of his dying sister. We don’t know what she was dying of, as her guards seemed committed to protecting her and ostensibly, if she was being attacked in the tower, her guards wouldn’t be idly polishing their swords beneath it. We only know that Ned proceeded to make her a mysterious deathbed promise.

The conclusion is that she died in childbirth after making Ned swear to pass Jon off as his bastard, and the feminine scream we heard as Ned ran to the tower in “Oathbreaker” indeed supports that theory.

Many fans are annoyed the scene didn’t play out in its entirety, but it gave us enough to say with certainty that Season 6 is confirming the longstanding fan theory known as R + L = J. We don’t know where Jon is going or what he’s doing with his new life — but we know he has a claim to the throne, whether he wants it or not. With one five minute sequence, then, Game of Thrones just shook up its entire story and proved that fan theories pay off.