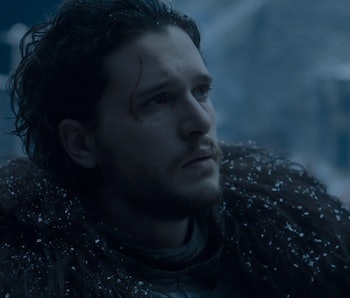 Game of Thrones is so ubiquitous that it’s naturally drawn comparisons to many other aspects of our culture, from American politics to Lord of The Rings. The Tolkien comparison is obvious, since George R.R. Martin makes no secret of his inspiration (a portly sidekick named Samwise and a fat friend named Samwell? Come on, Martin) but the show’s sixth season has brought an unlikely — and perhaps unintentional — parallel to the surface: Harry Potter.

This isn’t to say every epic and popular fantasy story is the same — the two narratives are wildly divergent as a whole. But the devil is in the details, and Season 6 of Game of Thrones has some intriguing minor connections to Rowling’s work.

Bran’s story arc this season involves diving into the past to watch it like an interactive movie. As actor Isaac Hempstead-Wright told Inverse, these jaunts into the past are “him finding out who he is and how he fits into the scheme of things — and what he has to do in the future.” Nowhere was this more apparent than in the Tower of Joy scene.

Sound familiar to something in the Harry Potter universe? Much of Harry’s important revelations about his parents background and his place in the world come from his dives into the Pensive. And like Bran, his jaunts into the past reveal that his father is less honorable than he’d thought. Bran watches Ned kill Arthur Dayne by fighting dirty; Harry watches his father bully Snape. In Harry Potter and the Order of the Phoenix, after witnessing the past, Harry is disturbed because, “judging from what he had just seen, his father had been every bit as arrogant as Snape had always told him.”

When Jon Snow comes back to life, he doesn’t jump for joy. His brush with death makes his outlook bleaker than ever. When Davos tells him he has to go on, he says, I don’t know how to do that. I thought I did, but I failed.” In a recent interview, Kit Harington said,

There’s a brilliant line when Melisandre asks: ‘What did you see?’ And he says: Nothing, there was nothing at all.’ That cuts right to our deepest fear, that there’s nothing after death. And that’s the most important line in the whole season for me. Jon’s never been afraid of death, and thats made him a strong and honorable person. He realizes something about his life now: He has to live it, because that’s all there is. Hes been over the line and there’s nothing there. And that changes him. It literally puts the fear of god into him.

Similarly, in Harry Potter and the Deathly Hallows, when Harry learns that he can’t avoid an intimate brush with death, he’s deeply, existentially afraid. Rowling writes,

Terror washed over him as he lay on the floor, with that funeral drum pounding inside him. Would it hurt to die? All those times he had thought that it was about to happen and escaped, he had never really thought of the thing itself: His will to live had always been so much stronger than his fear of death. Yet it did not occur to him now to try to escape, to outrun Voldemort. It was over, he knew it, and all that was left was the thing itself: dying.

In Game of Thrones, Bran Stark has never questioned his father’s honor. It’s never occurred to him that Ned could have lied about the past. “I’ve heard this story a thousand times,” Bran says, as he watches Ned fight Arthur Dayne. His smile fades when fails to play out the way Ned always told Bran it did.

Similarly, in Deathly Hallows, Harry learns that Dumbledore’s past isn’t as bright and shiny as he always thought. When he hears about his less than honorable treatment of his sister, Rowling writes,

Numbly Harry thought of how the Dursleys had once shut him up, locked him away, kept him out of sight, all for the crime of being a wizard. Had Dumbledore’s sister suffered the same fate in reverse: imprisoned for her lack of magic? And had Dumbledore truly left her to her fate while he went off to Hogwarts to prove himself brilliant and talented?

Ramsay Bolton is a pale despot who murdered his way into power and doesn’t seem to realize that disregarding the Northerners sense of pride and loyalty will come back to bite him.

Voldemort is a similarly melanin-challenged evil overlord who fails to take human nature into account.

Harry Potter was the Chosen One because of a Professor Trelawney’s prophecy, which goes as follows:

Similarly, there’s a prophecy going around about a savior called Azor Ahai that could be relevant to the newly resurrected Jon.

There will come a day after a long summer when the stars bleed and the cold breath of darkness falls heavy on the world. In this dread hour a warrior shall draw from the fire a burning sword. And that sword shall be Lightbringer, the Red Sword of Heroes, and he who clasps it shall be Azor Ahai come again, and the darkness shall flee before him.

The odious Walder Frey is played by David Bradley, who was Filch in Harry Potter, Catelyn Stark herself Michelle Fairley was Hermione’s mom in Deathly Hallows, and the wilding Osha is played by Natalia Tena, who also played Tonks. And that’s not all: In “Oathbreaker” we learned that Sam is not taking Gilly with him to the Citadel but rather dropping her off at the Tarly family home. Guess who will be playing his older brother? Freddie Stroma, who played the delightfully creepy Cormac McLaggen.

As Game of Thrones continues to stray beyond the books and into the unknown, it’s impossible to say what might come next. Since Jon Snow’s plot line is particularly dark and full of terrors, perhaps his next move is to rob the Iron Bank and escape via dragon.