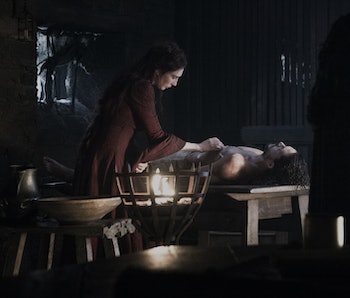 If you’re a casual non-book reading Game of Thrones fan who has responded to the Jon Snow resurrection hype by internet surfing, you’ve probably seen the phrases “Azor Ahai” and “The Prince That Was Promised” tossed around. If you have only the vaguest idea of what the hell that means, here’s a breakdown of their background, whether or not they refer to two different people, and what it means for Jon Snow.

Azor Ahai is a legendary hero in the faith of R’hllor (Melisandre’s faith) who lived thousands of years before the War of the Five Kings. As George R.R. Martin drew from many historical and mythical influences, think along the lines of the legends surrounding King Arthur.

Azor Ahai wielded a weapon nearly as legendary as the man himself (a sword called Lightbringer) and is said to be reborn when darkness descends upon the world to save humanity from the Others.

Melisandre originally thought Stannis was Azor Ahai reborn, but clearly that didn’t work out the way she thought it would.

“There will come a day after a long summer when the stars bleed and the cold breath of darkness falls heavy on the world. In this dread hour a warrior shall draw from the fire a burning sword. And that sword shall be Lightbringer, the Red Sword of Heroes, and he who clasps it shall be Azor Ahai come again, and the darkness shall flee before him.” - Melisandre, A Clash of Kings

Is Jon Snow Azor Ahai reborn? It hasn’t been confirmed, but he’s been brought back by the Lord of Light. Game of Thrones certainly seems to be straying in that direction.

Here’s where things get interesting. Unfortunately, in the process of forging his mystical sword, Azor Ahai had to plunge it into his wife’s heart to infuse it with her soul.

It’s said that we’ll know when we come across Azor Ahai reborn because he’ll wield Lightbringer, and it’s a flaming sword. That’s not exactly inconspicuous. But there are other theories that “flaming sword” is a metaphor, and won’t be a literal weapon. It might even be a person — which could explain why Jon is so drawn to gingers.

Intriguingly, many think Lightbringer might be Davos. His presence in “Home” as the last human to leave Jon’s side before he takes his first breath would support that theory.

The Prince That Was Promised

In some legends, the Prince that was Promised is simply an alternate name for Azor Ahai reborn. In others, he’s an entirely different hero and there’s no mention of a legendary sword. He brings the Song of Ice and Fire (yes, we see what you did there, Martin) and his presence will be announced by a bleeding star. He’s also a descendent of House Targaryen. Rhaegar Targaryen — Daenerys’s dead older brother and Jon’s probable father — believed he was the fated Prince at one point. Many fans still believe it.

While the show does seem to be setting Jon up for the Azor Ahai reborn narrative, The Prince That Was Promised is murkier territory. To support the possibility that Rhaegar Targaryen was this fated prince, Season 6 will finally show us what happened in the Tower of Joy all those years ago. And as Isaac Hempstead Wright, who plays Bran Stark, just told Inverse the revelations will be “earth shattering.”

In the DVD extras, Martin clearly states Azor Ahai and the Prince that was Promised are one and the same. But as the show is now making its own canon, it’s entirely possible it will disregard that. Still, we must acknowledge the possibility.

Resurrecting Jon is no spur of the moment move, done just because fans like him and his hair. For a show with the highest body count on TV, to actively reverse one of its victims is a huge deal. Whether or not Jon Snow is Azor Ahai, the Prince That Was Promised or both, he’s clearly got a crucial role to play in the story’s future.

We once said if Game of Thrones will end like Lord of The Rings — as George R.R.Martin himself said — then Jon is the story’s Frodo. But in light of his resurrection, it’s time to re-evaluate. Jon is the narrative’s Gandalf.

Now, next time you’re at a party and your book reading friends try to use Azor Ahai to hang onto their last vestiges of superiority, you can smile and say, “Please, I know all about that.”