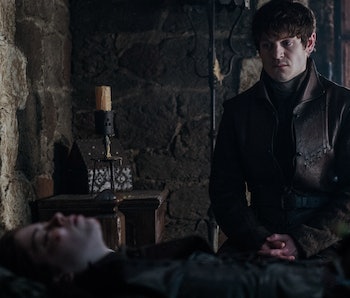 Part of what makes Game of Thrones fascinating is the place it occupies in our culture. It isn’t just a show, but a living, breathing entity. You can simply sit back and enjoy it, but hardly anyone does. Instead, it’s used as conversation starter at parties, grounds for debate about the merits of various fan theories, or it’s examined through the lens of how it’s changed today’s TV. Though its world is populated by more dragons than our own, its political bent also makes it ripe for endless real-world comparisons.

A lot of people have already compared Hilary to Khaleesi, but the latest episode brought another surprising political parallel: Ramsay Bolton is the Westeros equivalent of Donald Trump. Now, we’re not saying the comparison is absolute — Trump hasn’t actively murdered anything besides the idea of a hairstyle, and Ramsay Bolton has more diplomacy skills — but nonetheless, there are similarities that can’t be ignored.

No refugees beyond a wall

Donald Trump’s main platform involves building a wall between the United States and Mexico and banning Muslims from the country. On Game of Thrones, now that Ramsay Bolton rules The North, his main point of contention is the Wilding population, who have been displaced and are now advancing on the other side of The Wall. When Smalljon Umber delivers Rickon Stark to Ramsay in “Oathbreaker”, he named the Wildings beyond The Wall issue as selling point for why he’s joining Ramsay’s cause. “The Bastard Jon Snow let an army of Wildings past the wall,” he says.

This one is fairly self-explanatory: Donald Trump brings up dick size during political debates, Ramsay makes some unfortunate meal choices after removing Theon’s.

Both Ramsay Bolton and Donald Trump have no foreign policy experience. But that hasn’t stopped either man from using force to get what he wants. Trump has made statements about bombing ISIS, keeping Guantanamo Bay open, and killing terrorists’ families. Ramsay’s solution to every problem is the Westeros equivalent of “bomb them all!” it’s always “stab him” , “feed her to the dogs” , or “skin him.”

Just as Trump has inspired violence and attracted supporters like the KKK, Ramsay has won over Smalljon Umber based on mutual anger. “Your father was a cunt, and that’s why you killed him,” he says. “I might have done the same to my father, if he hadn’t done me the favor of dying on his own.”

There’s still a possibility he’s conning Ramsay— but if he isn’t, then he’s operating on rage to Make The North Great Again.

Are the Game of Thrones creators making a bold statement? Probably not; half the fun of Game of Thrones is reading more into the possibilities, not what’s actually there. The tapestry it weaves is rich enough to draw endlessly from. And as Ramsay Bolton’s reign over The North stretches on, it gives us a preview of how Donald Drumpf’s ideas may play out.