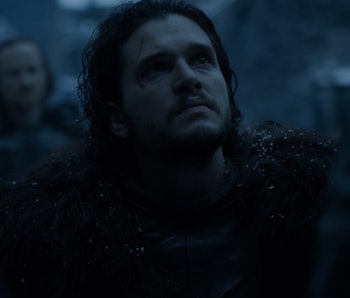 Although much has been made of the fact that Game of Thrones is now moving beyond its source text, there’s actually a lot we can still map out about its sixth season. The Iron Islands plot line, for example, is borrowed from an earlier book, and Bran’s visions are already confirming some longstanding fan theories. Jon’s resurrection wasn’t a surprise, but after “Oathbreaker,” his narrative is the show’s biggest question mark. After grimly musing about the nothingness beyond death, his fate (“I tried to I did what I thought was right and I got murdered for it, and now I’m back. Why?”), and hanging his would-be murderers, he leaves the Night’s Watch for the first time in over five seasons. He says, “my watch has ended,” heads alone into the unknown, and damned if anyone knows where he’s going.

Leave it to Jon Snow to have the most morose mic-drop the world has ever seen.

Although we’re not quite as lost as he is about why he’s back, we’re certainly with him on his “what now?” sentiment. Everything we know or can guess about him concerns his place in the story’s ultimate endgame; not his immediate future. But we can certainly stir up some possibilities.

If Jon is a Targaryen — and “Oathbreaker’s” Bran Stark Tower of Joy flashback fueled the fires of that longstanding theory — it stands to reason that Jon will have a bond with Daenerys’s dragons. Since Drogon is currently on the loose, it could be a perfect time for them to get acquainted.

Jon will wander around for months muttering “my watch has ended”

Jon is clearly not in a good place. Thanks to George R.R. Martin’s comments, we know that his brush with death means he lost something, and is back worse for wear; and thanks to the show’s own established rules of resurrection, we know he’s come back “less” . We see this firsthand in “Oathbreaker.”

After Jon hands Edd his Lord Commander cloak and says, “Wear it. Burn it. Whatever you want. You have Castle Black,” Edd clearly wants to ask, “Uhh, buddy, are you okay?” and we’re right there with him. Jon needs some post-death therapy. Without it, perhaps he’ll wander the Northern roads and forests aimlessly, gaze fixed ahead at nothing in particular, muttering, “all watch and no play makes Jon a dull boy.”

Game of Thrones likes to scatter its families to the wind, but we’re overdue for some more character convergences. With Brienne being the person who has met the most Starks, it stands to reason Jon will be next on her list. A Jon and Sansa reunion would fit the show’s bittersweet tone, as they were the least close of all the Stark siblings but each has arguably gone through the roughest transitions. Jon and Arya would be too sweet for Game of Thrones because they love each other too much.

Jon just really seems over everything. He’s over being Lord Commander, he lost his girlfriend, he’s over listening to his murderer’s excuses, he’s over life, he’s over death. He very well might just decide to become a hermit survivalist. But to keep himself busy, he’d begin writing Everyone Was Wrong About The White Walkers And The Wildings: A Manifesto.

Jon will go to Braavos

Jon is at a loss in having a sense of purpose and identity — what better answer than to become “no one?” Plus, then he’d get to reunite with Arya and take the world by storm as two unstoppable vengeance demon assassins.

Remember Benjen Stark? Ned’s brother, a member of the Night’s Watch, mysteriously disapppeared ranging North of the Wall and hasn’t been seen since? Jon was close enough to him that Benjen was the bait his murderers used to lure him out at the end of Season 5. If Benjen intends to surface again, Jon could really use a friend now. Perhaps Benjen could also enlighten Jon about his parentage if Jon and Bran’s paths don’t cross.

Jon will take back the North

We kind of already know this will happen, going off the trailer screenshots, the showrunners comments about a giant battle, and the unsubtle hints the writers keep setting up that Ramsay really wants to fight Jon.

There are a few episodes to go until the pivotal showdown — Jon will have to start kissing babies and brush up on his PR skills in order to raise an army.

For now, Jon is back, but his return has hardly been a cause to pop champagne bottles, at least for him. His plotline is dark and full of terrors, and for the first time, as we watch him storm away, we have no idea where he could possibly be going. He’s got a long way to go until he finds meaning in his new life — but his story has never been so filled with possibility.