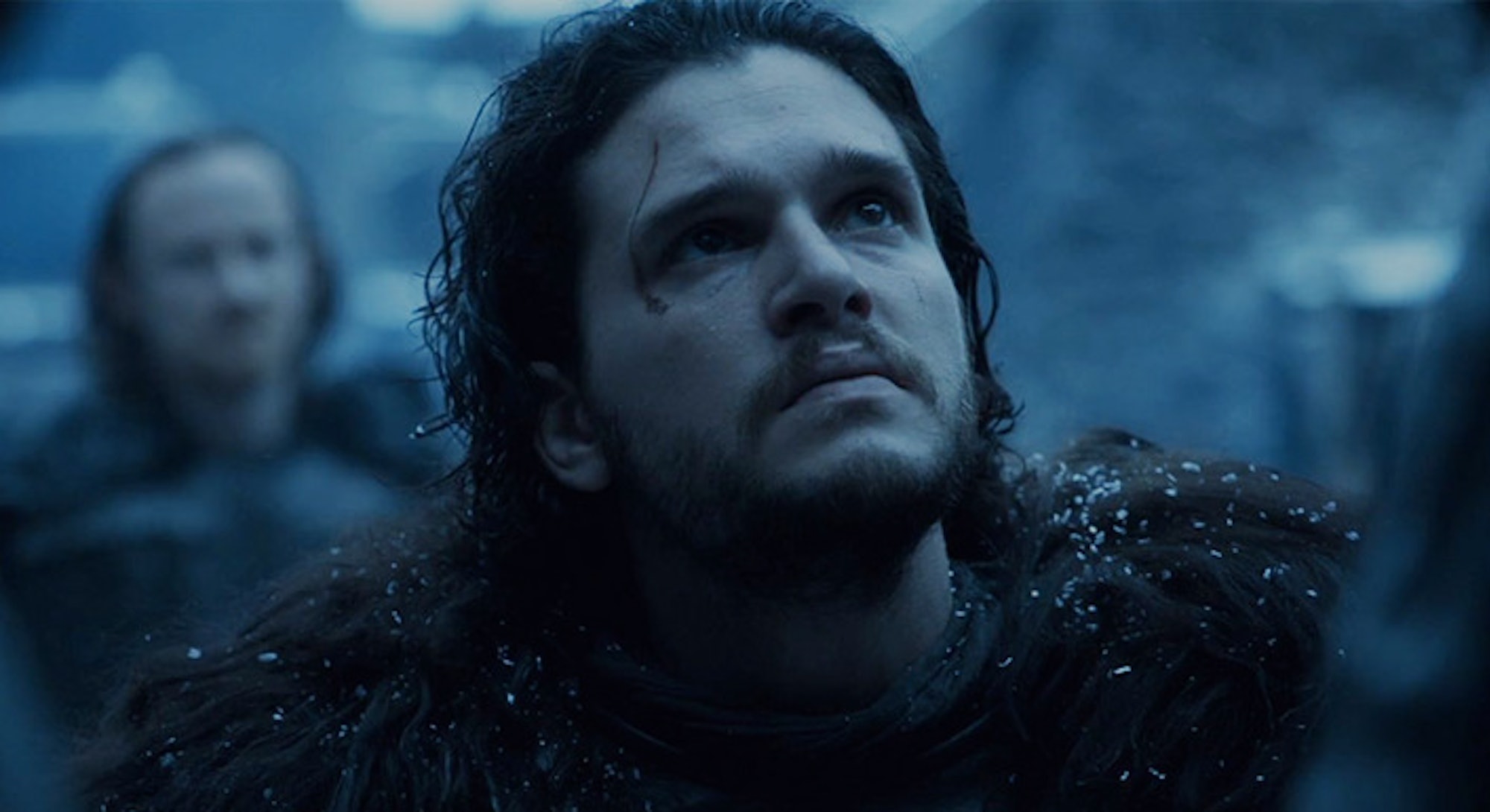 A very specific sector of Game of Thrones fandom had a buzzing, electric evening last night, during Season 6, episode 3. The show, unbound to George R.R. Martin’s text in its current season, is approaching a beloved fan theory slowly, building anticipation among those who care. If Jon’s alleged mother Lyanna, Ned’s biological sister, died in childbirth after having sex with Rhaegar Targaryen, that means Jon is actually both a Stark and a Targaryen, making him the human culmination of the two least evil houses in Westeros. His lineage means a lot of stuff, actually, both for contemporary Westerosi culture, and for the arc of the show.

If Game of Thrones commits to depicting Lyanna and Rhaegar as they’re described in Martin’s texts, the show will make strides in illustrating complex romantic relationships. According to the books, Rhaegar was a man with many classically feminine interests and traits, and Lyanna was a classically masculine woman. Let’s take a look at both characters and how they’ll likely embed themselves in the Game of Thrones story as it currently exists.

Rhaegar as a Tyrion and Jamie mash-up

According to Martin’s texts, Rhaegar Targaryen was a strikingly handsome young man, much like Jamie Lannister, but his personality as a boy mirrored Tyrion’s — that is, before Tyrion got really into visiting brothels, he read obsessively, as he actually admitted to Jon (of all people) in Game of Thrones, season 1. The fact that Jon and Tyrion experienced a brief connection while discussing dragons is significant, because both men grew up ostracized in their own homes.

Rhaegar is not outright described in Martin’s text all that often, but in one significant scene, Ned Stark remarks that he didn’t believe the Targaryen prince would be interested in cavorting with prostitutes. Rhaegar is described by others as moody, bookish and stand-offish, and there is a strong indication that he might have been bisexual. Though he was a skilled fighter, winning several tournaments (and thus Cersei Lannister’s admiration), he resented the public eye.

Game of Thrones loves a misunderstood masculine figure — one only has to look to Jamie’s false “Kingslayer” narrative, The Hound’s childhood torment, or Brienne’s gender trouble — so the accusation that Rhaegar raped Lyanna feels like a question the show will adore playing with. If there’s two things Game of Thrones seems to enjoy, it’s non-consensual sex and “revealing” that a bad guy isn’t all that bad after all.

So, Rhaegar has been generally accepted by Westerosi contemporaries as a rapist, just as Jamie Lannister is still accepted by the public as a Kingslayer. It’s unlikely, though, given what we do know about Rhaegar that he actually forced himself on Lyanna. Before meeting Lyanna, Rhaegar was forced, politically, to marry Elia of Dorne, a brittle young woman who was bedridden after giving birth to the couple’s only child. Accounts given in Martin’s text don’t indicate that Rhaegar responded to his wife’s ill health with anything other than concern, which is weird, considering Westerosi culture generally accepts extra-marital affairs, even when everything between a married couple is satisfactory.

What we do know is that Rhaegar, in a publicly humiliating gesture, crowned Lyanna Stark the winter rose of love and beauty, quite literally passing over his own wife with a ceremonial gesture in order to do it. Lyanna’s brother, Ned, noted in “historical” documents that “every smile…died” in the arena. After that public moment, Westerosi accounts break into shards. Many believe Rhaegar kidnapped and raped Lyanna, but this story is mainly attributed to the Baratheon family, who benefitted more than any other house when the Targaryen dynasty fell. Did the Baratheons plant a kidnapping/rape story in order to squeeze their way into King’s Landing? Crazier quests for power have been enacted.

If Rhaegar was a complex, bookish, ill-mannered misanthrope, what sort of woman could inspire him to a public, embarrassing declaration of love? Unlike Rhaegar, we have quite a few in-text descriptions of Lyanna.

Everyone who ever looks at Lyanna in A Song of Ice and Fire calls her inarguably beautiful. Characters who knew her more intimately, like her brother Ned, call her hot-headed, pushy, and “wolf-hearted.” Arya, in the text, is compared multiple times to her biological aunt, whenever she’s depicted as being especially argumentative or brave.

There’s an interesting romantic aspect to Lyanna’s depiction as well — Robert Baratheon, notable in Martin’s books for furthering the story of Lyanna being raped by Rhaegar, is obsessively enamored with her, though Ned Stark confesses in the books that Robert never really knew the real Lyanna, and was unfamiliar with “the iron underneath.” Like Rhaegar, Lyanna’s personality was at odds with her appearance. As far as Stark women go, she had Sansa Stark’s conventional beauty coupled with Arya’s difficult personality. Lesser men like Baratheons desired her for surface reasons. The concept that only similarly-misunderstood Rhaegar could access Lyanna’s true affection is both a satisfying narrative, and absolutely something “beta male” George R. R. Martin would come up with. That Lyanna and Rhaegar may have begat pouty, beautiful, misunderstood Jon is just icing on the misery cake.

First of all, Jon’s secret parental equation is about to shore up and make sense of quite a few middling Game of Thrones plot-lines. Why, for instance, would the most straight-forward and respectable man in Westeros history (Ned Stark) suddenly have an uncharacteristic affair with an unnamed prostitute? Feels like lazy writing because, as we’ll learn, it’s not true. Ned Stark was such a good-hearted man that he a) promised his dying sister Lyanna that he would look after her Targaryen baby and b) couldn’t come up with a good enough lie to appease his poor wife.

Jon’s true lineage will link him to characters who act and think like him (dreamily, righteously, awkwardly), including Dany (his aunt) and Tyrion (Dany’s possible half-brother). It also ventures to explain why, of all the Stark children, Jon felt the strongest connection to Arya, who, again, is the character most like Jon’s tragically fallen mother Lyanna. R + L = J’s validity would also make Cersei look like less of a ridiculous shrew; she hated her husband Robert Baratheon for lusting after Lyanna, but she also loved Rhaegar from afar, which means she would have doubly despised Lyanna. If Cersei knew anything about the Baratheon family pushing for Rhaegar as a rapist, she’d probably resent her husband even more, for sullying the reputation of the man she crushed on.

Going forward with the show’s plot, Jon as a true Stark-Targaryen hybrid has the potential to unite the North and those surrounding King’s Landing in a battle for the Throne, against the Lannisters. If he joined forces with his alleged Targaryen relatives — Dany and Tyrion — the three-headed dragon image would be complete, and those in support of Dany would likely ally themselves with the cause. As a good-hearted Baratheon heir, Gendry (remember him? still rowing a boat?) would present one of the only political challenges to Jon’s reign, but given that both characters grew up as bastards, they might be able to work something out.

In short, Jon as a product of Rhaegar and Lyanna means more than peace for Westeros; it means a unifying shift in the show’s tone, and a deeply satisfying tie-up for many of its quivering, unsolved mysteries. If Jon’s lineage is about to be revealed, then season 6 is about to be, far and away, the most masterful season of Game of Thrones to date.