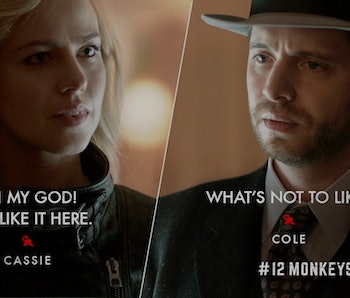 Syfy’s soft rebranding has been a boon to genre fans. The Sharknados and the Lavalantulas are still peppered among the network’s programming, but there’s been a concerted effort on the network’s part to try and bring their television shows away from the full-on schlock, and back into more respectable territory — without just simply re-running The Twilight Zone episodes all the time.

Two shows currently airing on the network that prove this are 12 Monkeys, the reimagining of Terry Gilliam’s 1995 time-travel film that is so good, it entirely stands on its own, and Hunters, the freshman alien invasion series that’s a little Aliens mixed with Law & Order. The way they tell their stories are remarkably similar, but their execution is unfortunately different.

Both shows rely on a kind of reverse dramatic irony. Specific mysteries are teased out in each episode, mostly tied to specific concepts or cryptic symbols that remain an enigma to the audience (and to some of the characters within the show), but act as a way to ferry the plot along by keeping up the tension without giving away all of the show’s secrets.

This, admittedly, is a highly reductive way to put the narrative flow of two good-to-great shows in hopelessly neat terms. These shows, after all, obviously want to maintain a level of drama that keeps audiences who appreciate good sci-fi on TV tuning in each week, and the strategy definitely doesn’t cheapen the shows on a narrative level. But boiling down plot-points that leap from mystery to mystery is how both shows fundamentally operate. The only problem is that 12 Monkeys seems to know how to do it, while Hunters is still awkward in getting its footing.

12 Monkeys has wisely been built out a robust mythology in a relatively brief time — 17 episodes so far — so much so that it overcomes the skepticism that came with the show’s announcement; after all, it’s impossible to ape Terry Gilliam. But watch 12 Monkeys and you find a sci-fi mystery that gets deeper and more resonant with every episode, every symbol, and every “splinter” (that’s what the act of time travel is called in the show’s parlance) that characters like James Cole (Aaron Stanford), *Cassie Railly (Amanda Schull), Jose Ramse (Kirk Acevedo), and others deal with each week.

This group of post-Apocalyptic fighters must travel back in time to stop a plague unleashed by an enigmatic cult-like group known as the Army of the 12 Monkeys. Done in a straightforward way, the premise would become stale within a few episodes. But what co-creator and current show runner Terry Matalas and his staff have managed to do with their constantly fascinating time loops is stay one step ahead of the audience, by tying the overall picture we think we know about the Army of the 12 Monkeys to specifically labelled mysteries linked to each character.

To wit: we eventually find out the seemingly insane business heiress Jennifer Goines (Emily Hampshire) is a “Primary,” an individual who can sense time moving around her, and she also becomes the leader of an all-female group of survivors called “The Daughters.” Ramse, briefly in cahoots with the puppet-masters of the apocalypse plot that go by such Lynchian names as the Pallid Man and the Striking Woman, is known to them as “The Traveller. A few characters have visions of a kind of wooded hell on earth featuring trees with blood-red leaves called The Red Forest, and the entire plot to upend time and annihilate humanity is watched over by a figure called “The Witness.”

During the course of the show these labels were sometimes mentioned without explanation, and some eventually became clearer due to the actions of the characters searching for answers. Others, like The Witness, still remain a mystery. Hunters, while it still introduces its own labels to explain its mysterious alien invasion plot, simply tends to let the phraseology slide in a thematically empty way. The show hasn’t given viewers a dramatic hook to keep them guessing.

For instance, the alien language is sonically embedded in literal symbols in Spotify playlists, but there’s no reason for us to care because we’re usually ushered along to the next scene. The hunters harvest organic material out of human spines that leave gaping holes in their victim’s backs, which is brought up on the show all the time, but only used as a way to track hunters. The aliens have their own muscle in the form of two mutated twins called “The Feelers,” who skulk around clicking but are largely ineffective on a narrative level, while the show’s own puppet-master is someone known only as “Brother Number Four.”

Granted, 12 Monkeys has the benefit of a more than solid first season and constantly experimental second season over the five episodes of Hunters that have aired so far, but it’s obvious that they share an important bit of DNA even this early on when it comes to narrative progression. Perhaps unsurprisingly they share some behind the scenes DNA as well, as former 12 Monkeys showrunner Natalie Chaidez developed and co-created Hunters. Screenwriter Sean Tretta even put in some time on both shows as well, including the most recent Hunters episode (its best so far) called “Love and Violence.”

Overall, Hunters relies on the mysteries themselves to think viewers will be invested enough to keep watching, while 12 Monkeys always gives viewers enough of a reason to want to keep tuning in because of those mysteries. There’s a difference there. But based on the fact that Hunters recently answered the mystery behind its most glaring symbol — the disappearance of the wife of lead character Flynn Carroll (Nathan Phillips) — it looks like the show should be on the right path. But either way, Syfy has a lot going for it and that’s no mystery.