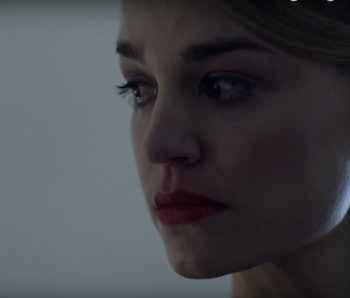 It took five episodes, but Flynn finally has a reason to be emotionally engaged with this crazy saga in a meaningful and complicated way. At the end of last week’s “Love and Violence” some sonic torture of McCarthy (who’s left out of this week’s episode, most likely for recovery) led Flynn to an abandoned storage locker and a big commercial-grade freezer with a body inside; it was Abby.

The question of whether she’s alive or dead that’s haunted Flynn through the first four episodes was answered — or was it? “Her Body in My Soul” might not have delivered on the gloriously grisly practical effects or the police procedural action that were the highlights of earlier episodes, but it seemed like the first time the main character was fully tied to the core themes of the show, making this the best episode so far and a good sign for what’s to come.

The biggest relief is that Flynn wasn’t just moping around over the disappearance of his wife and tagging along on random tangentially related ETU missions. Yes, anything the ETU did could have led to Abby, so that’s why he jumped headfirst into being an anti-alien commando, but some over-the-top interrogation and simple sleuthing is what led Flynn to the body. It’s his adopted daughter Emme that blows the whole thing wide open, revealing the show’s biggest twist yet. The idea that Abby could be a hunter came into play a while back, and it’s troubled Flynn every since.

Abby’s body, thawing out on an ETU gurney with a gaping hole in her back, is not the real Abby. It seems Emme was contacted by someone calling herself Abby via a Spotify playlist, actually met with her, and never told Flynn. A mini stakeout just like old times in the FBI reveals Abby alive and well, decked out in heels and a dress and schmoozing with a random guy who we find out is an IMF employee named Richard Seraphin, who might be involved in helping bankroll the hunters’ illegal activity. Flynn’s worst fears have only just been realized.

The highlight of the episode isn’t some shootout or peek at a native hunter or McCarthy monologuing in a way only McCarthy monologue. The scene where we see the alien Abby assuming her identity in the storage locker sometime before she and Flynn meet in 2010 was another standout. But instead, Flynn confronting Abby in a hotel room where he spots her, and the straightforward but emotionally wrought tête-à-tête that ensues between the two is all that we need to jump back into the show.

Nathan Phillips’ performance as Laura Gordon’s alien Abby, who just drops truth bomb after truth bomb, shows off an acting range you probably couldn’t have predicted when he was simply punching hunters in the face or shooting off sonic guns. His panicked, “You killed my wife?” line, followed by Gordon’s delivery of “I am your wife,” is the most resonant and powerful moment of the series, and it came at the right time. It seems Abby has been playing Flynn all along, first starting out working the narcotics angle against Flynn’s former partner (with McCarthy getting rid of him when he snooped a little too far) and then on Flynn. But instead, alien Abby got a little too emotionally connected to Flynn and Emme, forgetting her main mission and leading to this point.

Kudos to screenwriter Sean Tretta for making the words the characters speak in “Her Body in My Soul” part of the action instead of the other way around. Tretta has been doing the same thing writing for Syfy’s other current genre great, 12 Monkeys, a show that’s so smartly written and grounded in its characters you forget that it’s a complicated time travel show featuring multiple time loops that’s all about the end of the world. While Hunters doesn’t necessarily pull of the same genre balancing act, at least when it needs to highlight the broken connections between two characters it can pull it off.

And also kudos to the episode for giving us our first look at the mysterious Brother Number Four, the hunter puppet master whose appearance is surprisingly secondary to Flynn’s and Abby’s alleged farewell. Flynn wants answers from her, mostly about why the hunters are after him. “Because you lived when you should have died,” she tells him before he makes it look like she put up a struggle before getting away by shooting her. Brother Number Four’s vaguely middle eastern digs, plus the heavy references to Flynn’s tours of Afghanistan, imply that we’ll be getting many more flashbacks to come. Hunters has finally hit its stride, and the craziness has only just begun.