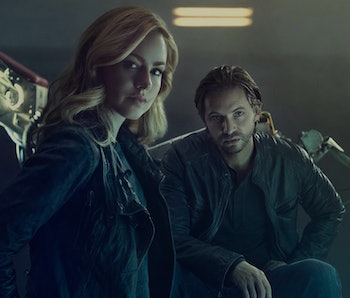 April 18 marks the premiere of the second season of Syfy’s breakout series 12 Monkeys, based on the 1997 film by Terry Gilliam. This season will bring with it some big changes behind the camera, as season one showrunner Natalie Chaidez has departed to helm Syfy’s Hunters. Fortunately for fans, Chaidez was replaced with EP’s Terry Matalas and Travis Fickett, the team that developed the show in the first place.

Matalas and Fickett are extremely excited about the events ahead in season 2 (and you should be, too). On April 1, speaking at NBC’s Summer Press Day, Matalas promised a bigger, more expansive season two, saying, “The scope spans hundreds of years, so it does feel a lot bigger. This season is pretty epic in scope.”

Before the season 2 premiere next Monday night on Syfy, here’s the rundown on what to expect when Cole and his pals hit the time stream in a new (probably futile) attempt to save the future. Whether you’re a returning fan or you’re new to the series, now is a great time to get in on Syfy’s time-hopping romp.

What You Missed In Season One

Essentially, the season ends with every major character in dire straights. In the past (aka, 2016), Cole (Aaron Stanford) is trying to save his time-traveling buddy Ramsey (Kirk Acevedo) from succumbing to a gunshot wound, even though Ramsey has basically just spent thirty years actively conspiring against Cole’s mission to save the world (fatherhood will make you do some crazy shit). Young Jennifer Goins, now financially enabled after a hostile takeover of her father’s business, is flying off to parts unknown, her private jet filled with suitcases full of the virus. Oh, and some shadowy organization has just spawned twelve kids in the bowels of their opulent hideaway.

Meanwhile, in the present (that’d be 2043), the good Dr. Jones (the awesomely stoic Barbara Sukowa) is trying to save Cole’s lady friend, Cassandra Railly (Amanda Schull) who’s also taken one in the gut. Jones has the added joy of contending with the recent hostile takeover of her facility by Deacon (Todd Stashwick), a fellow who’s got history with Cole and Ramsey. Deacon is aided by the Army of the 12 Monkeys, who, in the series, are an actual army of spooky badasses and not a bunch of whining college kids led by a crazy-eyed Brad Pitt, as was the case in the movie.

Where Things Are Going in Season Two

Judging by the already-released stills from season 2, don’t expect Ramsey or Cassie to go and die just yet … or at least not permanently (since both characters have already theoretically died at least once).

Beyond that, expect more time travel. Remember, when the series began, only Cole was hopping around and fidgeting with the very fabric of the Universe. By the end of the season, both Ramsey and Cassie were in on the fun.

Not only will more characters be splintering (that’s show lingo for “time travel”) this season, but they’ll be going farther back in history, according to the Hollywood Reporter:

“The second season will see Cole and the rest of the team travel to the ‘40s, ‘50s, ‘70s and even briefly all the way back to World War I, among other eras. ‘These different time periods are a really great place to explore these characters emotionally,’ said Matalas.”

In fact, the Syfy Channel’s web site reveals that, “appearances by at least eight other decades,” are in the works outside the two main timelines. In a lot of series, the promise of an increasingly splintered storyline would be a little nerve-wracking. In lesser hands, that might be a recipe for mass confusion. However, during season one, 12 Monkey’s writer’s displayed an uncanny ability to juggle the often confusing narrative territory of time travel with expert ease.

In terms of the character caught in the middle, things won’t be so straight forward, which is just how we like it. Season two sees the show’s core cast in remarkably different places than they began, emotionally, geographically, and temporally. Trapped in the past, Cole has managed to find some hope that the future can be changed. Cassie is a toughened woman living in the present, the previously saintly Ramsey is in need of redemption, and Deacon is going to be all over the place. The showrunners are putting a lot of attention on Deacon (who’s now a series regular) and his place next to Cassie and Dr. Jones (who unsurprisingly remains as stubbornly consistent as ever).

Oh, and in case you’re wonder, season 2 will definitely reveal the identity of the Witness.

You Need To Be Watching This Show

If you were initially turned off by the seeming lack of originality involved in adapting a cult film into a full-length series, or you were put off by the mediocre reviews, you made a mistake. Fortunately, it’s not too late to correct that error.

Syfy’s 12 Monkeys was already one of the most enthralling and complex action dramas on TV, and in season 2, as it’s creators come to the head of the team, the show will be more immersive, more adventurous, and altogether more addictive.

It’s never a bad decision to spend some time with Cole and the gang, and season two is going to make that more evident than ever.