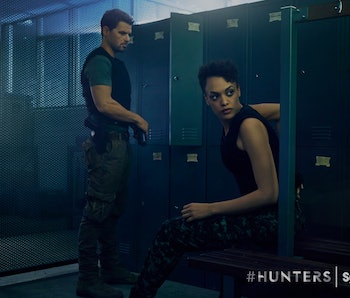 The plot of Syfys newest show Hunters can be boiled down to two words: “alien terrorists.” But that highly reductive description does little justice to a fascinating, somewhat frustrating, but ultimately gratifying, premiere episode that leaves many questions unanswered and makes you want more.

Merely teasing out information seems to be the standard operating procedure for the show early on, which is a wise move. The show cooks up some dubious hooks from the get go with a collection of disparate and confusing images that beg viewers to keep watching to figure out what exactly is going on: A dreadlocked man remixing music in a spare room, a group of caged rabbits panicking in their cramped enclosure, and a bloodied naked woman clutching her ears a the floor as the volume of the man’s music increases. Hunters sets details up just to knock them down, and only time will tell if any of it makes a lick of sense.

The main story of Hunters follows former FBI agent Flynn Carroll (Nathan Phillips), whose wife (played by Laura Gordon, who we later learn is the caged woman) is mysteriously kidnapped by what we find out are a clandestine group of alien invaders called “hunters.” The disparate members of the group of unearthly humanoids, led by an alien lunatic that calls himself McCarthy (Julian McMahon), are hell-bent on slowly destabilizing… something. Carroll’s own detective work to find his wife brings him close to the alien truth, and forces him to cross paths and join up with a secret Men-In-Black-sans-the-humor government agency called the ETU (Exo Terrorism Unit), whose job is to find and eradicate the alien threat.

We don’t know what McCarthy’s grand scheme is this early on — other than creating widespread chaos — but just like the real-world analogy posited by the show, we can infer that it’s not good. “Hunters make ISIS look like girl scouts,” one ETU character broods, while McCarthy and the unseen hunter commander is described being “like the bin Laden of little green men.” A standout performance by actress Britne Oldford as an ETU agent who’s also a hunter herself will complicate things nicely, especially when Agent Carroll finds out that her kind is responsible for his wife’s disappearance.

The show pummels you over the head with the hunters-as-terrorists parallels, but just because its overt allusions to terrorist insurgents and the Iraq War are obvious doesn’t mean it isn’t a gripping spin on the alien invasion story.

An added bonus is that while Hunters is firmly based in the sci-fi genre, that kind of human-based police procedural that could even make it appeal to non-sci-fi fans. It’s got all the hallmarks of sci-fi classics — the ETU recalls the colonial marines of Hunters executive producer Gale Anne Hurd’s groundbreaking movie Aliens, while the snarling and coyly threatening demeanor of the hunters themselves seems to be an homage to Predator, even if the titular character and the alien terrorists of the show end up looking nothing alike. But it also resembles an amped-up, alien-filled take on a counter-terrorism version of Law and Order.

Hunters looks to be an action-packed slow burn mystery peppered with magnetic performances and some seriously top notch practical effects. Hurd and creator, showrunner, and executive producer Natalie Chaidez bring some serious sci-fi clout to the table with their previous work (including The Terminator, The Walking Dead, and 12 Monkeys), and the unfortunate part is that the premiere of Hunters tends to fall into the cliches of these influences a bit too heavily. The familiar territory of Carroll’s fish-out-of-water caught in this worldwide sci-fi threat mixed with zero context for the hunters’ presence on Earth might be off-putting for some, but the the episode could only be labelled a disappointment if the story didn’t continue. Thankfully the series has an entire season to reveal its secrets. We’ll gladly be the prey.

More like this
Entertainment
23 hours ago
Community movie confirmed by Joel McHale — but there's a huge catch
By Jake Kleinman
Entertainment
3 hours ago
Will Agatha: Coven of Chaos feature one of Marvel’s oldest (and scariest) villains?
By Richard Newby
Entertainment
44 minutes ago
Who is Hulk King? She-Hulk could be setting up a Secret Invasion villain
By Dais Johnston
Related Tags
Share: