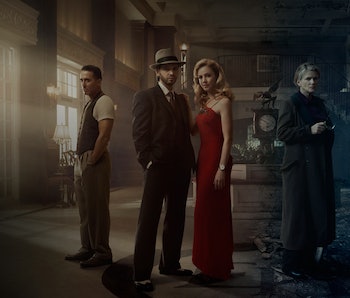 We’ve known for some time that the second season of Syfy’s 12 Monkeys would offer us the chance to tag along with Cole and the gang as they visit as many as six new time periods. It looks like audiences won’t have to wait long to see Cole and Ramse don period duds when they investigate the origins of the Army of the 12 Monkeys.

In an exclusive clip from Syfy, James Cole (Aaron Stanford) and Jennifer Goines (Emily Hampshire) are led down a musty hotel hallway while an employee apologizes for the misunderstanding. We’re not sure what that misunderstanding is, but there’s a good bet it involves the giant lurking just behind Jennifer and Cole. The quartet stops just outside room 607, a number that means something to Cole. After a business-like apology, Cole and Jennifer are led into a dust-covered room that looks like it hasn’t been cleaned (or re-decorated) in ages.

Of course, mere moments in, we discover the room has been left purposely untouched, having been purchased “in perpetuity in 1944 by a Mr. James Cole.” Inside the room are relics from bygone eras: an old Walkman, an opened, vintage can of TAB. Then, the hotel’s owner hands Cole a key and walks out.

It’s a pretty juicy scene if you look examine it. First and foremost, though the second season’s first episode ended in a Mexican standoff between Goines, Cassie, and Cole, in this clip Cassie is nowhere to be seen. Are Cole and Goines on the run from Cassie? (If they are, it won’t be for long.) And where is Ramse? He was knocked out at the end of last episode by some unknown person presumed to be Cassie.

From what’s actually included in the clip we can infer that room 607 is about to become very important in season 2. Judging from the anachronisms sitting around the room, it’s a base of operations for Cole and his friends as they jump through time, circling back to the same geographic location. Of course, given how inaccurate time-travel is, it’s only natural Cole would eventually want to establish some reliable place where he could spend his down time.

Of course, as much information as the clip reveals, it raises more questions than it answers. What is Cole’s mission in the past? Who’s the man in the 1940s-set photograph with him? Can we please see Cole and Jennifer tackle Bigfoot back there?

We’ll find out this Monday night at 9 p.m. EST, when Syfy delivers another dose of time-traveling goodness.