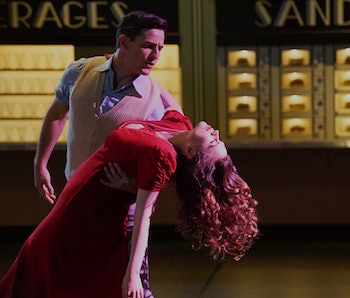 There’s still no word as to whether or not ABC Family’s Agent Carter will be returning for a third season, and that’s a huge bummer. We love the show and think it absolutely deserves to be back. Why? It’s amazing, and Hayley Atwell is probably our favorite actor in the Marvel Cinematic Universe. And regarding season two’s finale, she had a lot to say about the show’s potential return and its wrap-up:

“There’s a balance with how it ends. There’s enough of a cliffhanger to suggest that that’s where we’ll go forward if the show gets picked up again. But things are nicely wrapped up in a way that I think the audience will find very satisfying. The audience won’t feel frustrated. If anything, they’ll come away satisfied but also curious as to what happens beyond, because thanks to all the Marvel films she has appeared in, we know that Peggy’s life goes on and she lives quite an extraordinary life and a long life. So there’s always room to revisit her in different ways, different decades and different ages.”

California was fun. It’s not right for the show. Peggy belongs in Gotham and Gotham needs a hero like Peggy. Plus, New York gets us closer to Europe, and that’s where the team should be spending some adventure time this season. There’s so many threads leftover from the last two seasons leading back to old, dusty European places. I want to see Agent Carter in a spooky castle. Is this too much to ask?

Give Carter The Potential For Love

The show gave Carter a new love interest this season and made him into a ghost. Then it teased a return to a familiar flame, but honestly, who cares about that old entanglement? We’ve got to give Carter a chance to grow and become independent of the expectations the MCU has pinned her against.

This female led superhero show with dual female showrunners, executive producers Tara Butters and Michele Fazekas have a rare opportunity to make something truly special here. Marvel has already sunk millions into the 18 hours of content they’ve created and shared with the world in Carter’s world. Whether the world is tuning in for this show in record setting numbers doesn’t matter — it serves Marvel to keep it on the air and take some real chances. Make this like a Guardians of the Galaxy where anything can happen.

What gets people talking about Agent Carter far more than any actual event on the show is the silliness of the show’s actors and their social media presence. They remain the only dubsmash videos I’ve ever chosen to watch. Let the show play up the meta winks and the characters’ personalities. Hell, they gave a half-assed musical episode this season. Why not go all the way?