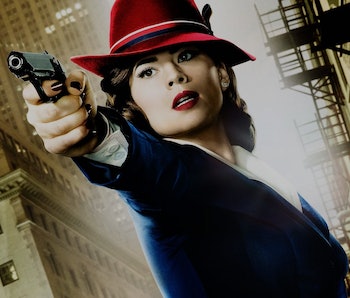 Folks, Agent Carter is probably screwed. While word hasn’t officially come down from the head honchos over at ABC, the spy drama’s fate is pretty damn certain. If TV tradition holds out, the show’s incredibly passionate fanbase won’t be getting a third season of Peggy Carter’s ass-kicking intrigue.

If you’re not familiar with the female-driven drama (and judging by the show’s ratings, you aren’t), you’re absolutely missing out on one of the best action shows on television. From its tight storytelling to its truly kickass fight scenes, ABC’s Agent Carter is more than just a giant leap forward for female characters, it’s one of TV’s most engrossing hours.

If Agent Carter wasn’t a Disney property and if Disney didn’t have all kinds of money to throw away on underperforming shows, Agent Carter would have been cancelled three episodes into its first season based on its shitty ratings alone. As it is, though, Disney makes crazy amounts of cash so they can afford to keep producing a show that averages a truly depressing 2.5 million viewers on a major network.

Unfortunately, though, it looks as though Disney’s patience and Agent Carter’s time are running out. First and foremost, Hayley Atwell accepted another job at ABC, as the lead in a pilot for yet another show about lawyers. Beyond that, it seems as though ABC has begun testing the waters for another lady superhero as Agents of SHIELD regular Adrianne Palicki has been tapped to star in a pilot called Marvel’s Most Wanted, which may supplant Agent Carter’s time slot. There’s also 12 Year’s A Slave screenwriter John Ridley’s super duper extra top secret Marvel pilot for Agent Carter to contend with.

In other words, it seems like Disney and ABC are ready to accept Agent Carter’s demise and move on to other potential Marvel hits.

The Argument for Loving Peggy Carter

And, if Agent Carter does get cancelled, that’d be too bad. Since its premiere, the show has drawn righteous praise from both critics and all six of its fans. Enthusiastic reviews are usually tinged with buzz words like “progressive” and characterizations in the neighborhood of, “unapologetically feminist.” These plaudits are very apt, but they also distract from the visceral joy of Disney’s spy drama.

In short, Agent Peggy Carter kicks all kinds of ass:

There’s an old saying about Ginger Rogers and Fred Astaire which points out that even though he gets all the credit, she had to do everything he did, only backwards and in high heels. If you swap “dancing” with “murder,” that statement absolutely applies to Agent Carter. After all, you may have seen a guy beat the crap out of another guy while a runaway truck was barreling towards a cliff, but there’s an extra layer of exhilaration added when the main character is saving the day in a skirt and high heels.

The show should also get credit for writing villains with motivations that are both unique and relatable. Take, for example, this season’s big bad Whitney Frost.

Here was a woman who’d spent her entire life being smarter and more capable than the people around her, only to be told that her best bet for a happy future was to land some man. When she finds the means to twist the world around her to her whims, it’s only natural that she’d grab it and hold on tightly. Frost sets herself apart from decades of villains, because her aim isn’t about grabbing more power, it’s about grabbing some power. She’s the kind of villain you almost root for (which is totally the best kind of villain).

In other words, though the show’s more politically-friendly aspects often take center stage, it’s the character development and moment-to-moment intrigue that make the show. The writing is the star, here, not the politics.

It’s Not Over Yet

As of this posting, Agent Carter’s fate is mostly certain. Sure, the occasional rumor of it’s survival have surfaced, and Atwell herself seems totally game to keep playing Carter in spite of her new role. Even after Conviction was announced, Atwell put out an interview in which she talked excitedly of the possibilities for future seasons of the show.

In Carter’s corner, there’s the fact that each season is a self-contained story with a muted 10-episode run during Agents of SHIELD’s Winter hiatus. It’s entirely possible that Atwell could balance the acting duties of both shows, which might allow for future terribly rated seasons of Agent Carter.

From a fan’s perspective, there’s also the fact that season 2 of Agent Carter ended with a cliffhanger that would be truly cruel of ABC not to resolve.