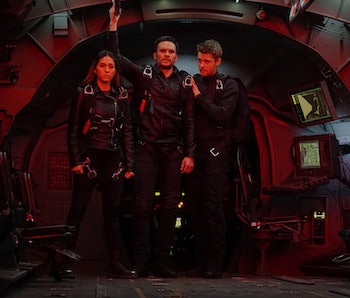 HYDRA is winning, which is a good thing, given how close we are to the season finale of Marvel’s Agents of S.H.I.E.L.D. But the end of last night’s episode, “The Team” is a real blow to the black-ops organization of the MCU, while the episode itself is an enjoyable whodunit — or rather, whoisit — that relies on paranoia and distrust for dramatic effect.

After a successful rescue mission led by Daisy (Chloe Bennet) and her Secret Warriors, a team made up of Inhumans — Lincoln (Luke Mitchell), Marlena/Yo-Yo (Natalia Cordova-Buckley), and Joey (Juan Pablo Raba) — S.H.I.E.L.D. takes HYDRA head Gideon Malick (Powers Boothe) into custody, where Phil Coulson (Clark Gregg) learns that Hive (Brett Dalton) can easily power over all Inhumans. But they don’t know how. And so Coulson locks down the base with their powerful new friends, immediately their worst McCarthyistic nightmare.

After 40 or so minutes of the episode hinting at possible culprits, we learn the truth: Hive got none other than Daisy herself. But Hive’s sway isn’t a zombified turn. Like Kilgrave in Jessica Jones, it’s the kind that motivates you to work for the influencer. “Like a bond,” Daisy passionately tells Lincoln, who became her fall guy to Coulson. Daisy is clouded and is now working for her sworn enemy. Kinda. (Ward is, strictly speaking, dead, his body is just being used.)

What will it take to get Daisy back? Can she actually be saved, or has S.H.I.E.L.D. permanently lost one of their most important characters? (Probably not.)

But there’s several years until Marvel’s Inhumans movie and already Agents of S.H.I.E.L.D. feels like it’s gearing up. It also feels like it’s gearing up for Civil War, but the Inhuman paranoia is being completely ignored in favor of government oversight than McCarthyism in that hyped-up Captain America that’s around the corner. Until then, S.H.I.E.L.D. is comfortable and confident asking its own tough questions.