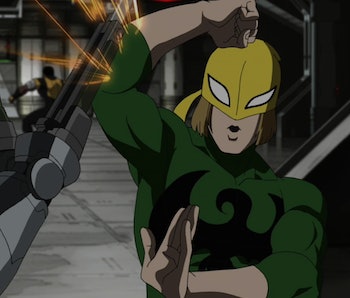 Danny Rand, the son of wealthy New York magnate Wendell Rand, grows up in the mystical city of K’un L’un after his parents are killed in an expedition. Years later, Danny returns home as the superhero Iron Fist. That’s probably what’s going on in these unofficial set photos of Marvel’s Iron Fist, coming to Netflix next year. Uploaded by a Tumblr user, series star Finn Jones is photographed as Danny, barefoot in a baja hoodie with a third-gen. iPod, fresh from his years in K’un L’un.

At least we think it’s the set of Iron Fist. It could just be Finn Jones on his way to sociology class at NYU, listening to Live Phish Vol. 20 and thinking about the fashion major buying a dime from him later. Because that’s what happens in gritty-looking superhero origins: They look nothing like superheroes.

We’ll most likely see the Iron Fist costume within the next few months, in a stylish promo image Marvel and Netflix obnoxiously release at midnight that fans will fawn over. But until then, there’s just these bizarre pictures of Finn Jones looking blitzed and remembering that time in ‘93 when Jerry played “Shakedown Street” twice in one night.

Although this isn’t new for superheroes. Remember Bruce Wayne in Batman Begins?

Or Peter Parker in Marc Webb’s The Amazing Spider-Man?

And remember Scott Lang in Ant-Man? Granted, Scott was an actual thief. Finn’s only crime is selling hashish which he’ll explain in extreme length why it should be legalized.

Marvel’s Iron Fist will release on Netflix next year, under direction from show-runner Scott Buck. After his solo series, Iron Fist will team up with Daredevil, Jessica Jones, and Luke Cage in Marvel’s The Defenders.