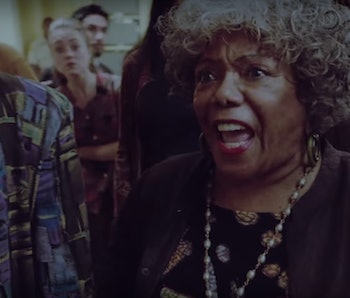 The last episode of American Crime Story: The People v O.J. Simpson took quite a turn, and a lot of the show’s characters - even the typically serene Judge Ito - lost their cool. The episode also saw a heavy increase in the show’s commitment to ‘90s nostalgia. While previously, lead prosecutor Marcia Clark’s (Sarah Paulson) bad hair and bland suits were the only real reminder that American Crime Story took place in the 1990s, it got real heavy this week. Even OJ’s lawyer, Johnny Cochran (Courtney B. Vance) shook his booty after nicknaming one of the black female jurors “En Vogue.”

Not only did the influx of ‘90s references prove highly entertaining, they also served to firmly ground the show’s setting in that particularly turbulent era, and recontextualize the O.J. Simpson trial for modern audiences. While many “period” shows fall into the trap of using shallow gimmicks to recreate a sense of retro nostalgia - Vinyl, anyone? - American Crime Story’s inclusion of ‘90s cultural artifacts are not only a reflection of their times, but proved defined the era’s pop culture and media in a way that continues to influence us today.

The episode was soundtracked to cheesy ‘90s pop, which created a base for the show to build on. It wouldn’t have been half as memorable to witness Clark, after a particularly frustrating round in court, finally prove herself human by going berserk and destroy her office - kicking over boxes and sending files flying everywhere - if it hadn’t been synced to The Folk Implosion’s ticking “Natural One.” Likewise, after the fed-up jury is forced to enter the courtroom under contempt of court and Judge Ito (Kenneth Choi), it’s powerful that their defiant stares and crossed arms - prominently displayed by the black jurors - is accompanied by none other than Public Enemy’s now-emblematic, “Fight the Power.”

The sudden choice to use these cultural artifacts this late in the series shakes things up, adding an unexpectedly wry, playful dimension, and serves to propel the narrative forward. It’s almost as if, in the previous seven episodes, the showrunners purposefully restrained themselves, carefully building tension, in order to hit the high note of hysteria and release an explosive energy that is the very quintessence of the 90s.

The OJ Simpson trial took place in LA just a few years removed from the Rodney King beating. Racial tensions were incredibly high in the ‘90s, and nowhere is this more wonderfully illustrated than in a fight scene between the black and white jurors over which Blockbuster VHS tapes to watch.

The black jurors insist on watching Martin while the white jurors want to watch Seinfeld. (We may take it for granted now, but the ‘90s was a ground-breaking era for minority comedians - remember the Wayan brothers’ In Loving Color, and Margaret Cho’s All-American Girl?) “Seinfeld. Never heard of it,” comments an older black female juror, waving her hand.

Speaking of comedy, poor Judge Ito even manages to catch a spoof of himself on TV, when a group of bearded and bespectacled Judge Ito look-alikes prance around, cabaret-style, with a Marcia Clark wanna-be on The Tonight Show With Jay Leno. It’s a small nod to the fact that not only news channels fuelled the media circus of the O.J. Simpson trial. The rise of talk daytime and late night shows - hosted by powerful personalities like Arsenio Hall, Ricky Lake, Oprah, as well as stalwarts Jay Leno and David Letterman - also helped to shape popular opinion, transforming a criminal justice case into low-brow entertainment on a historically unprecedented level.

Then there’s the spotlight on DNA - commonplace enough now, but first popularized and sensationalized by the Simpson trial. As Robert Kardashian (David Schwimmer) plays cards with O.J. (Cuba Gooding Jr.) in his prison cell, a legal aid asks, “What are they throwing at you tomorrow?” Not bothering to look up from his hand, Kardashian replies, “DNA.” “Whatever that is,” the aid adds, dismissively.

In an era that includes both the resurgence of irreverent humor and racially-divided issues, I’m looking forward to catching more 90s milestones in American Crime Story; doubtlessly, some will be silly and arcane, others startlingly, even pointedly relevant to today.

More like this
Culture
Feb. 2, 2023
After Harry Potter, Daniel Radcliffe Obviously Had to Play a Farting Corpse
By Alex Welch
Culture
Feb. 1, 2023
If The Last of Us Made You Bawl Your Eyes Out, You Need to Revisit This Zombie Rom-Com
By Mónica Marie Zorrilla
Culture
Jan. 31, 2023
A Delightful New Hulu Show Finally Figured Out the Superhero Sitcom
By Dais Johnston
LEARN SOMETHING NEW EVERY DAY.
Share: