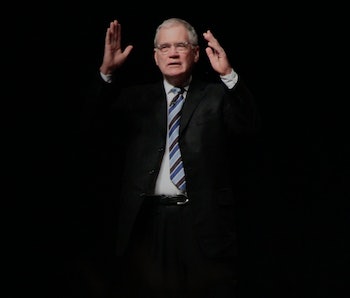 In 1970, as 600,000 people crowded onto the Isle of Wight to listen to Hendrix, David Letterman was predicting sunny days in Naptown. As the weatherman for WNTS, Letterman, who was fresh out of Indiana University, made a name for himself congratulating tropical storms on being upgraded to hurricanes and storms in fictional cities. He was a hit, but he wasn’t a hippie dippy weatherman. He was beloved by the sort of parents who didn’t much care for bellbottoms.

Though technically within the bounds of the Baby Boomer generation, 1946 through 1964, Letterman never aligned himself with his generation. As of this evening, he’ll have spent his entire career on television making jokes for the Greatest Generation. The man Johnny Carson presumably wanted to be his successor never sought to answer (or pay attention to) Bob Dylan’s rhetorical questions, which is why - despite ups and downs - he was never bad.

Jay Leno was bad. In fact, Jay Leno was so bad (and, paradoxically, popular because of it) that Jay Leno’s badness is just assumed to be the centerpiece of his mediocre legacy. But the reason Leno’s badness remains interesting is that it had more to do with demographics than with Leno himself or the personality differences between Leno and Letterman. A few years can make a big difference.

Leno, a few years Letterman’s junior and an alumnus of hippie haven Emerson College, was a more successful standup than Letterman largely because he had to be - he wasn’t on television. He was, it is worth pointing out, extremely funny and a bit racy when he was playing edgy comedy clubs in Los Angeles, speaking to largely baby boomer audiences.

The problem was letting him on TV. When Leno beat out Letterman for the Tonight Show gig in 1992, the younger man looked like the more forward-looking choice. Leno’s audience was younger, but it was also problematic. The Baby Boom generation was - as has been documented by all of the sociologists - schismatic. Pollsters working for the Clintons were famously able to predict political affiliation by asking voters if they felt the sixties were good or bad for America. Leno wanted donkeys and elephants so he had to divide by the lowest common denominator, which, for those keeping track, is making mean-spirited fun of random pedestrians.

Letterman didn’t have to dumb it down because the audience he spoke to, known colloquially as “old people,” was part of a fairly unified generation, one that liked his sardonic sensibility and, having won a World War, was less likely to bicker about identity politics. Letterman’s humor, basically whimsical cynicism with a side of midwestern scorn, never changed. Some young people liked him or the musical guests his staff did an excellent job of booking, but most didn’t, which was fine because no one actively disliked him. He was just from a different time.

With Letterman signing off, Late Night now belongs to a different generation. Jimmy Fallon, Jimmy Kimmel, Jimmy Corden, and Conan O’Brien are younger men who view hippies as a comedic archetype rather than a target demo. Their work is Internet-oriented and their politics are entirely implied; everyone just assumes that they’re Hollywood liberals. No one ever assumed that of Letterman. He didn’t talk politics out of old-fashioned courtesy, not concern about ratings. He avoided disagreeing with his audience, but he made no real effort to be agreeable. He worked for his audience and that was enough.

Now that he’s gone, no one will work to entertain them again - no one working on network television anyway.