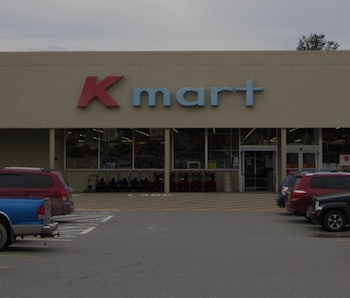 Corny throwback culture is having yet another spool through the cassette deck. The Chicago Tribune shared the story of Mark Davis of Naperville, Illinois. The former KMart employee pocketed five years’ worth of his KMart’s store music on cassette tape and uploaded the mixes onto the Internet Archive for the world to enjoy.

Pressing play on one of Davis/Kmart’s late ‘80s/early ‘90s mixes is like pulling a freshly wiped-down cart from the rack and getting ready to enjoy some blue light specials. The mix is a quintessential blend of bland easy listening hits and saxophone solos to shop by. The time capsule is sealed up tight, all the way down to the still-intact “Attention KMart Shoppers” bumpers that formed the precursor to so many corny ‘90s jokes. It is music that is somehow both present and indistinguishable, pleasantly unobjectionable and vice-versa, and it fits snugly in the well-beaten pocket of retro ‘90s love carved out by a moody corner of our culture.

Heartwarming as the mixes are, Davis’ story of smuggling the tapes out is the real hook, made better by the fact that the theft was motivated out of no bitterness. They were destined to be thrown out, anyway. “I loved working for KMart,” Davis told the Tribune.

What is it about mixes like KMart’s that resonate?

“For starters, I think it is the audio signature,” says Vikram Babu, a Bay Area writer and cassette jockey who runs Tape Famous, an all-cassette party music service. “The highs are cut out, so it’s not fatiguing at all.”

What are those sensibilities? “Less mechanistic. For a lot of musicians who still record instruments, tape flutter and warp only add to the lack of mechanism. Loudness, too. As much as I turn up my cassettes, it never feels that loud.”

With their “flutter and warp,” cassette tapes seem to bend time. They draw attention to the clumsiness, the limitation, of the production value, without being overtly obnoxious or explicitly ironic. This allows the tapes to transcend the music, instead of (or in addition to) the other way around.

Their appeal spikes when compared to something like Time Warner Cable’s lampooning of lame “hold music.” In a series of commercials featuring a caller listening to TWC’s hold music and gyrating accordingly, Time Warner draws attention to our perverse love of blandness itself.

But compared to the KMart tapes, this performance rings hollow. It is a joke that says: “You’ve spent too much time on hold lines; poor you.” And though the callback innovation does promise to save time and frustration, you can’t get those lost hours back, not even by laughing about it.

Furthermore, this ridicule comes from the company itself — a company that routinely ranks lowest in consumer satisfaction — rather than from an outside source. That self-consciousness degrades the value of the joke; Time Warner mocks itself, so you don’t have to.

As the Polish writer Czeslaw Milosz put it, “Irony is the glory of slaves” — in other words, a loser’s prize. Time Warner Cable making fun of hold music is like a bully laughing about how easy it was to beat you up.

What endears about the Mark Davis story is the dashing rebellion involved. Davis smuggled the tapes out as though under duress, and published them for all to enjoy. It’s malfunctioning Pandora meets Wikileaks, tossed into the trunk of a DeLorean. An outsider’s credence has been lent to the joke — and with it, a free pass to laugh.

If KMart had digitized its ‘90s-era shopping music, it would be brand mocking self. Not only would that cheapen the joke, it would place the consumer in the crossfire. We were idiots for putting up with it, just as we were idiots for sitting on hold with Time Warner Cable, in pursuit of a lost cause.

Inversely, under this arrangement, Kmart, and all of ‘90s culture, is in the seat of lampoonee, where it belongs, and we are free to enjoy the music without feeling like chumps.