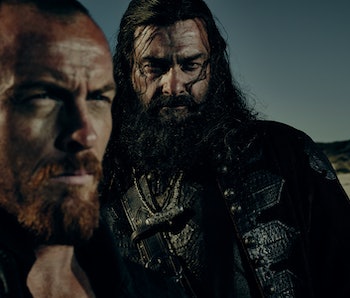 Black Sails is a show full of scheming, reversals of fortune, and general skullduggery. Each week, we’ll break down the conniving, betraying, ass-kicking, and unexpected alliances as they emerge. Without further ado, let’s dive into the Season 3 premiere.

Black Sails always excels at introductions that convey exactly who a character is with impressive economy, and the show outdoes itself with Blackbeard. In a mere two minutes, a perfectly cast Ray Stevenson establishes himself as a new power player. Although his appearance in this episode is brief, his “let us away to Nassau” knowingly invites us back into the show’s world and confirms there is indeed a new and different kind of sheriff in town.

Who is the utterly screwed?

Eleanor had the unenviable choice of either meeting the noose or stabbing everyone she’s ever known in the back. For a schemer like Eleanor, the choice was obvious. Many viewers find her hard to sympathize with, but Season 3 promises great things for the controversial character. If she has dug her own grave, it’s definitely an interesting one.

Likewise, we can’t help but note the similarities between Woodes Rogers and Season 2’s James McGraw. The British military man with an edge might meet his match in Flint.

For the most part, Black Sails resists making its villains mustache-twirlingly evil. We’re obviously inclined to side with the pirates over Woodes Rogers, but even he is not a pure antagonist. The multi-faceted nature of its characters looks to remain one of the best things about Black Sails.

Pirate-Gangster is the new Buddy-Cop

Rackham’s jaunty irreverence naturally clashes with Vane’s gruff ferocity in a way that’s always been tremendously fun to watch. Yet, we’ve barely seen the two share the screen since Season 1 — and even then, they were presiding over a brothel rather than a ship. This is the first time we’ve seen them interact on equal footing as two respected captains, both in good social standing.

It is touching and telling to see how deeply Rackham values Vane’s regard — even as his scheme with the slave ship shows that he clearly won’t let this interfere with his business. Vane, for his part, reveals a more thoughtful side around Rackham, pondering the significance of sitting on English soil with Spanish gold.

One quibble with this episode is the time-jump that occurred between Season 2 and Season 3. Vane alludes to a particularly striking confrontation between the pair and Flint that would have been very interesting to see firsthand. But the storytelling in Season 2 was so strong that we trust the writers to have skipped past the moment for a reason.

Charles Vane dramatically kills a man within his first five minutes on screen, because of course. The rest of the episode, however, showcases his more thoughtful side, which proves he’s taken his Season 2 conversation with Billy to heart. It’s neither Rackham nor Flint who delivers the episode’s pensive closing monologue, but Vane himself. “What we’re doing here demands a response,” he says. “What that response will be, what form it will take, what face it will wear — by the time we know it, there will be no time to prepare for the blow that follows.” The face it wears is none other than that of the girl Vane used to love.

Black Sails excels at these character beats and hearing Vane’s musings as the camera pans to Eleanor is deliciously dramatic without feeling melodramatic — a moment that was truly earned for the character.

Flint and John Silver make for another great pairing, aided by Toby Stephens and Luke Arnold’s fantastic chemistry. Flint had all the power in Season 1 and viewed Silver with contempt. In Season 2, they became a reluctant team and their mutual respect steadily grew (along with the viewer’s respect for Silver). Now that Silver is ascending and that Flint is unraveling, their relationship looks to be taking a rocky turn.” You have worked your way into the heads of the men out there,” Flint tells Silver. “And they’ve granted you authority because of that — but in my head, you are not welcome.”