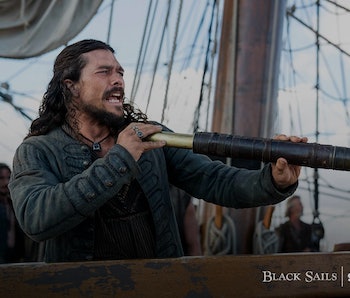 In less than a week, Black Sails is returning. We’ve given you a breakdown of Flint’s character, a breakdown of Charles Vane with help from Vane himself, and a primer for Season 3 — but Black Sails is a complicated show full of schemes, shifting alliances, and general skullduggery. If the details of Season 2 are fuzzy and you haven’t had time to rewatch, don’t despair: We’ve got you covered. Here are all the pertinent alliances and character beats to remember going into Season 3. Warning if you haven’t finished Season 2, spoilers ahoy.

“Flint gives an order and I need to put on a show to convince you it’s in your interest. But I give you a look and you’re willing to murder a man over it?” — John Silver

At the beginning of Season 2, John Silver was a conniving little twerp who only cared for his own interests and planned to ditch the pirate lifestyle as soon as possible. He antagonized Flint regularly and when he tried to speechify to the crew, he got a fist to the stomach more often than a pat on the back. John Silver’s M.O. was looking out for John Silver.

By the end of Season 2, Silver is a beloved member of the crew, he’s Flint’s chief advisor, and he loses a leg just to save the brotherhood he initially didn’t care to be part of. Still, even though Silver’s a real pirate now, first and foremost, he’s a skilled liar, a master manipulator, and a champion storyteller. Going into Season 3, we’ll have to see how that figures into his status as a real pirate.

Like Silver, Jack Rackham started Season 2 at the bottom of the litter, thanks to that time Anne Bonny murdered eight Ranger men, Vane found out, and made their name dirt on the streets.

And although he made some dumb choices over the course of the season (picking Max over Anne), Jack emerges from Season 2 with a captainship, a renewed accord with his former captain, a repaired reputation, a partnership with Max, Anne Bonny by his side, a hull full of Spanish gold, and presumably more pairs of pirate sunglasses.

Jack Rackham, John Silver, and Max are the schemers and connivers, and going into Season 3, they’re all on top. Granted, since Black Sails makes Game of Thrones’s conniving look tame, their positions probably won’t last long, but these are the only characters who will use their wits before their swords. We’ll have to see if that changes in Season 3.

“I have done what I have done to arrive at this point and I will live with it, but do not for a moment believe that that defines me” — Eleanor Guthrie

Eleanor Guthrie is a polarizing character: Some fans dislike her for her lack of loyalty to her loved ones, some understand where she’s coming from and respect her ruthless ambition.

Regardless, by the end of Season 2, her single-minded vision for Nassau’s future at the expense of all personal relationships has backfired: Eleanor has gone from top dog as the Queen of Thieves to the bottom of the barrel as a condemned prisoner. She’s burned all her bridges and instigated a breakup that makes Sid and Nancy’s relationship look placid and functional.

She’s learned that lesson we all eventually learn: It’s not the best plan to screw over one of the most notorious pirates in the world, especially if his tokens of affection include presenting you with your enemy’s head on a stick. You really shouldn’t be surprised when he pins his breakup note on your father’s dead body. Maybe remember that for next time.

The only person who would conceivably consider rescuing her is Flint, and he’s got his own shit to deal with now. Eleanor is on her own, and if you’ve seen the trailer for Season 3 it’s not giving anything away to say she’s now in a position where she may have to stab even more former friends, lovers, and allies in the back. Whether or not you like Eleanor or lose patience with her constant betrayals, she’s going to have a hell of a season — and Charles Vane is her Public Enemy Number One.

“I know too well the pain of the yoke on my shoulders; I know the freedom of having cast it off. And as I am free, I hereby claim the same for Nassau. She is free today, and so long as I draw breath, she shall remain free” — Charles Vane

Charles Vane can be a little hotheaded. He doesn’t always think before he speaks … or acts … or antagonizes potential allies … or cuts someone’s head off.

For much of Season 2, he’s a thorn in Flint’s side: He screws around with everyone’s plans, throws the entire island into chaos by occupying the fort, and even tries to behead Flint in the fifth episode. But by the end of Season 2, we come to a surprising realization: Charles Vane is actually a decent guy. In fact, the character he has the most in common with is Billy Bones, as we see when he tries to recruit him.

“You’re not some petty thief in it for coin,” he tells Billy, in the ninth episode. “You’re a proper pirate, committed to our way of things. Committed to a life free of the yoke and loyal to a fault.” That sentiment describes them both.

Vane and Billy Bones are the two most pure-hearted pirates, through and through. Billy might seem more civilized than Vane on the surface, but in the Season 2 finale, when he bursts in to save John Silver and chops Vane’s man like sushi, we see that Billy’s got some savage in him — just as Vane, in turn, has loyalty and honor. Going into Season 3, the pirates of Nassau are no longer in-fighting: They realize how the rest of society sees them, and they stand united to defend their lifestyle. Charles Vane and Billy Bones are the two men most likely to take arms to fight for this idea.

Ever since Flint told Vane, “Let’s show them they were right to be afraid” in the Season 2 finale, it’s no longer a given that Flint is the calculating one and Vane is the savage: Flint’s beast has been unleashed.

Now that Flint is on a rampage against civilization, he’s no longer concerned with higher ideals about Nassau’s future. He’s even shaved his head going into Season 3 to show us just how much he means business. He means it so much, he can’t even be bothered to spend any time pulling his hair back.

Flint is the biggest wildcard, moving forward. For everyone else, we have a firm idea of what they’re fighting for. For Flint, furious at all of civilization, it would be a shorter list to try and name what he’s not fighting for.

New Season 3 characters Blackbeard and Woodes Rogers are also wildcards because they’re sure to shake things up, with Rogers striving to tame Nassau and Blackbeard striving to bring it backs its roots.

Season 3 premieres on the 23rd. Look out for our interview with Ray Stevenson, aka Blackbeard, coming up, or peep our recent conversation with Zach McGowan.