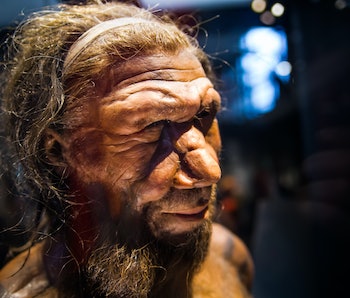 “It’s not the population or species we expected.”

Archaeologist Yossi Zaidner can’t articulate the excitement he felt when his team unearthed ancient human fossils at an open-air excavation site in Nesher Ramla, Israel. The region had been known for Homo sapiens fossils, but as he recounts to Inverse, the real twist came when he realized they had found something entirely unexpected.

They had found a new type of Homo altogether.

The discovery — In two companion studies published Thursday in the journal Science, researchers describe the discovery of a new ancient Homo — one which lived alongside Homo Sapiens more than 100,000 years ago, in the Middle Pleistocene era, in what is now Israel.

They have named the new Homo type the Nesher Ramla Homo.

This previously unknown to science, archaic Homo has profound implications for understanding both where modern humans and Neanderthals came from and how they interacted.

The findings suggest Neanderthals’ direct ancestors would have lived in the Middle East as far back as 400,000 years. The researchers refer to this new population as the “X population” — a hint at the missing link between Homo sapiens and Neanderthals.

“This population is... the missing population,” Rachel Sarig, a co-author on the studies and a professor at Tel Aviv University, tells Inverse.

Why it matters — The most profound aspects of this discovery are that it upends the prevailing theory of Neanderthals’ European lineage, and instead proposes that Neanderthals evolved from an ancestral population who lived in the Levant, or what is now called the Middle East. It also suggests that this pre-Neanderthal Homo lived alongside ancient Homo sapiens. In fact, when the fossils were originally unearthed, Zaidner says he thought they were Homo sapiens.

In other words, Neanderthals can no longer be said to be exclusively European. Archaeologists already know that Homo sapiens arrived in the Levant 200,000 years ago, and this discovery hints at how genes considered to come from Homo sapiens appear in the Neanderthal genome prior to the period humans and Neanderthals supposedly mixed and interbred.

Biohistorian and a co-author on the papers, Israel Hershkovitz, is glad for this challenge, as it helps create a fuller picture of human evolution.

“It is good to shake the academic establishment once in a while, and rethink our hypothesis and our conception of human evolution and refresh,” he tells Inverse.

Through this finding, “the Levant in the Middle East is solidified as a geographical bridge,” Lucía Nadal Urías, a Ph.D. student in biological anthropology at the University of Cambridge, explains to Inverse.

“I do think that there has been a paradigm shift that's been a long time coming,” she continues, “with telling a way more complex story of recent human origins.”

Their interaction could have been so brief as one — critical — encounter.

WHAT’S NEW — The discovery and analysis of the Nesher Ramla Homo is a veritable goldmine for paleoanthropologists. This archaic human is unique, the researchers explain, because its skull contains a blend of features considered archetypical of Neanderthals and Homo sapiens, as well as other archaic human species.

From fragments of the fossilized jaw bone, the researchers suggest that the Nesher Ramla Homo’s chin and jawline closely resemble Neanderthals’ own, while the fossil skull fragments align more closely with archaic Homos’ skulls instead. Taken together, these fossils offer a window into how humans migrated through the Middle East and out into Europe and Asia, and also how they interacted with other ancient humans.

Incredibly, these fossils were found interred with fragments of the same kind of sophisticated tools associated with Homo sapiens at the time. Indeed, remains of Homo sapiens have been found a mere 50 kilometers away from this site, implicating the close interchanges and cultural exchanges between these two populations of ancient humans.

Digging into the details — While there may have been close cultural contact between these populations, we can’t say whether the Nesher Ramla Homo and Homo sapiens made a point of mingling with one another, or had barbecues every weekend.

Rather, Zaidner says their interaction could have been so brief as one single — critical — encounter in which a member or members of the Nesher Ramla Homo group gleaned tool-making skills from their neighboring Homo sapiens, and then brought those skills back to their group to pass through the generations. The tools in question are evidenced in pieces of flint, honed to points — they look incredibly similar to tools found at Homo sapiens fossil sites.

Yet genetic testing suggests that, whether in a fleeting encounter or more sustained interaction, the Nesher Ramla Homo and Homo sapiens likely interbred and produced offspring.

“We know that there was gene sharing, because based on a genetic analysis, we know that some Homo sapiens genes could be found in Neanderthals and vice versa,” Sarig says. In other words, the X population got X-rated at least once with ancient Homo sapiens.

That would explain how genes associated with Homo sapiens made their way into the Neanderthal genome. This is perhaps unsurprising given their proximity and how long they were neighbors. The researchers estimate these two groups lived alongside one another for as long as 100,000 years, between 140,000 and 120,000 years ago.

WHAT’S NEXT — The next course of action for these researchers is to further analyze the fossils discovered at the site to look for more clues of how the Nesher Ramla Homo lived, Sarig says.

“Now that we have this new definition, everything falls into place,” she continues. “All the fossils that you couldn't assign before, we didn’t know what they were exactly. Now we’re looking at it in a new way, a new perspective.”

Zaidner says that we need a better picture of how the Nesher Ramla Homo interacted with the neighboring Homo sapiens. “How did they interact?” he ponders.

“Was this a social group interacting or just individuals?” Ultimately, that might require some more digging — but this discovery suggests the dirt may hold the answer to mysteries of how ancient humans lived, exchanged ideas, and ultimately, thrived.

Abstract 1: It has long been believed that Neanderthals originated and flourished on the European continent. However, recent morphological and genetic studies have suggested that they may have received a genetic contribution from a yet unknown non-European group. Here we report on the recent discovery of archaic Homo fossils from the site of Nesher Ramla, Israel, which we dated to 140,000 to 120,000 years ago. Comprehensive qualitative and quantitative analyses of the parietal bones, mandible, and lower second molar revealed that this Homo group presents a distinctive combination of Neanderthal and archaic features. We suggest that these specimens represent the late survivors of a Levantine Middle Pleistocene paleodeme that was most likely involved in the evolution of the Middle Pleistocene Homo in Europe and East Asia.

Abstract 2: Fossils of a Middle Pleistocene (MP) Homo within a well-defined archaeological context at the open-air site of Nesher Ramla, Israel, shed light on MP Homo culture and behavior. Radiometric ages, along with cultural and stratigraphic considerations, suggest that the fossils are 140,000 to 120,000 years old, chronologically overlapping with H. sapiens in western Asia. Lithic analysis reveals that MP Homo mastered stone-tool production technologies, previously known only among H. sapiens and Neanderthals. The Levallois knapping methods they used are indistinguishable from that of concurrent H. sapiens in western Asia. The most parsimonious explanation for such a close similarity is the cultural interactions between these two populations. These findings constitute evidence of contacts and interactions between H. sapiens and MP Homo.

More like this
Science
Sep. 23, 2022
Ancient DNA reveals the shocking scale of Anglo-Saxon migration
By Jennifer Walter
Science
Sep. 15, 2022
This tiny reptile roamed with the dinosaurs — and could solve an evolutionary mystery
By Jennifer Walter
Culture
Sep. 13, 2022
How one Ancient Greek thinker revolutionized math — and possibly started a cult
By Becca Caddy
Related Tags
Share: