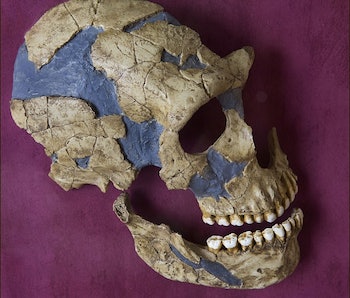 Human history is constantly being rewritten. Sometimes the changes to the narrative are relatively small —like learning that Neanderthals could actually turbo-breathe, or that they really liked eagles. But sometimes, new research alters our perception of the past completely. And that's certainly true of a new study published Wednesday in the journal Cell . The findings essentially rewrite a critical part of the story: Homo sapiens' journey out of Africa.

The human story tends to go like this: Anatomically modern humans, aka Homo sapiens, arose in Africa some 200,000 to 300,000 years ago, and then left the continent around 60,000 years ago in a single mass migration to go colonize the rest of the world.

But here's a plot twist or two. Study senior author Joshua Akey, professor at Princeton University, tells Inverse that Homo sapiens have actually been leaving Africa for hundreds of thousands of years, and migrated multiple times — not only out of Africa, but back into Africa.

And when these early humans returned to Africa, they brought something with them: new genes — the result of Neanderthal-human interbreeding. The results are the first solid evidence of Neanderthal DNA found in an African population.

“All living individuals today harbor that legacy of gene flow with Neanderthals,” he says.

Akey and his team have the data to prove it. For the first time, they have identified a substantial amount of Neanderthal DNA in African people. Until now, scientists assumed that the percentage of this DNA in African populations would be zero or close to zero.

“From the 10,000-foot view, what I find really cool about our results is that it highlights the complexity of human history,” Akey says. The genetic admixture between Homo sapiens and Neanderthals is a defining feature of human variation, he says.

New members of the Neanderthal family

When scientists first started looking for Neanderthal genetic sequences in modern humans, the idea that the two groups of hominins even produced offspring was controversial, to say the least. As a result, the scientific community was conservative in trying to distinguish between sequences that look similar to Neanderthals because they were inherited, versus sequences that look similar because of shared ancestry.

A challenge underlying all ancient human genetic studies is that humans and Neanderthals have a common recent ancestor, Akey says. There are lots of places in our genome that look similar to Neanderthals just because we share a relatively recent origin with them — that makes it tricky to distinguish what genes came from which hominin, and how.

"Honestly, I was pretty skeptical of the results for a while."

To get past this problem, Akey and his team developed a new statistical method called IBDmix to identify Neanderthal sequences in the genomes of living people, The researchers used a reference human population when conducting their analysis. African people were chosen to be that population because it was assumed that, since Neanderthals weren’t in Africa, there probably wasn’t much opportunity for hybridization.

The team didn't set out to find Neanderthal sequences in African individuals. Instead, they were more concerned with creating next-generation tools to spot these introgressed sequences in other human populations already assumed to have some Neanderthal DNA. But when they realized that IBDmix didn’t need to use living humans as a reference population they, as Akey puts it, thought well, let’s analyze some African populations.

“Then we found all of this Neanderthal ancestry,” he says. “Honestly, I was pretty skeptical of the results for a while because it was so antithetical to the assumptions that we were making. It took us a while to sort of convince ourselves that it was actually a real signal.”

The researchers used IBDmix to analyze the DNA of 2,504 individuals who participated in the 1,000 Genomes Project and sequenced Neanderthal genes taken from bones found in the Altai mountains of Siberia. These genes acted as the reference population that would help them identify Neanderthal sequences in modern people.

They found, on average, 17 megabases of Neanderthal sequence per individual in the African sample, which corresponds to approximately 0.3 percent of the genome. A megabase is used to measure the number of base pairs of a genome segment. Previous studies had found less than one megabase.

They also discovered Africans exclusively share 7.2 percent of Neanderthal sequences with Europeans and only 2 percent with East Asians. This is likely because the Neanderthal DNA shared by Africans is linked to previously unaccounted-for migrations by European ancestors back into Africa.

And while the timing of the initial out-of-Africa gene flow from humans to Neanderthals is debated, the data here is consistent with models that place the event at about 100,000 to 150,000 years ago. The study authors note that this doesn’t mean that an earlier event wasn’t possible — but for now, IBDmix can’t detect it.

A shift in understanding

People who don’t have African ancestry have genomes that are between 1.9 percent to 2.2 percent Neanderthal on average, Akey says. Oceanic populations also have an additional 2 to 3 percent of their ancestry that can be attributed to another species of ancient hominin, Denisovans. (Oh, and if you are sitting there wondering if you need to check your 23andMe results again, some results on the test can indicate the certain individuals are nearly 4 percent Neanderthal. But, Akey says “that is almost certainly wrong.”)

Another consistent observation has been that East Asian individuals have approximately 20 percent more Neanderthal ancestry on average as compared to Europeans. Why this is has been debated, but one theory is that there were multiple “waves” of Neanderthal genetic mixing.

But the IDBmix method found that East Asian individuals are 8 percent more Neanderthal than Europeans, likely explained by a single wave of Neanderthal admixture after an initial out-of-Africa dispersal. The reason for the discrepancy is because previous analyses used African individuals as a reference population, and scientists had underestimated the amount of Neanderthal DNA in Europeans, the researchers suggest.

Past affects the present

The new analysis also identified 51 high-frequency Neanderthal haplotypes in modern humans, including several that were previously undetected. Haplotypes are sets of DNA that tend to be inherited together and — while the details are still being worked out — and are thought to affect health and behavior.

"In some places, we are actually more Neanderthal than we are modern human."

But in other regions of the genome, the frequency of Neanderthal alleles is really high. That means those bits of Neanderthal DNA were beneficial, and rose to high frequency over time. Akey hypotheses that many of these genes are involved in immune function, and probably played a role in defending the body from pathogens.

“In some places, we are actually more Neanderthal than we are modern human, and that’s a sign of an advantageous sequence,” Akey says. “Any complex trait that is influenced by a large number of variants across the genome is going to have some component of Neanderthal influence.”

The more interesting question is figuring out whether or not Neanderthal ancestry contributes disproportionately to particular types of diseases, Akey says. There is some evidence that autoimmune disorders may be disproportionately influenced by the ancient DNA, he says.

That is likely due to the fact that Neanderthal sequences seem disproportionately high for immune genes. Take celiac disease: The risk of having celiac is increased if you carry certain variants of genes. Seven of those variants are inherited from Neanderthals.

That part of the human story still needs filling in. It is also unclear just how much traces of other ancient hominins can be found in our genome. At least nine species of hominins once walked the Earth. For now, scientists can only look for genetic signs linked to a sequenced genome. But as this study shows, human history is messy — and it’s difficult to predict what will be discovered yet.

Abstract: Admixture has played a prominent role in shaping patterns of human genomic variation, including gene flow with now-extinct hominins like Neanderthals and Denisovans. Here, we describe a novel probabilistic method called IBDmix to identify introgressed hominin sequences, which, unlike existing approaches, does not use a modern reference population. We applied IBDmix to 2,504 individuals from geographically diverse populations to identify and analyze Neanderthal sequences segregating in modern humans. Strikingly, we find that African individuals carry a stronger signal of Neanderthal ancestry than previously thought. We show that this can be explained by genuine Neanderthal ancestry due to migrations back to Africa, predominately from ancestral Europeans, and gene flow into Neanderthals from an early dispersing group of humans out of Africa. Our results refine our understanding of Neanderthal ancestry in African and non-African populations and demonstrate that remnants of Neanderthal genomes survive in every modern humanQ2population studied to date.