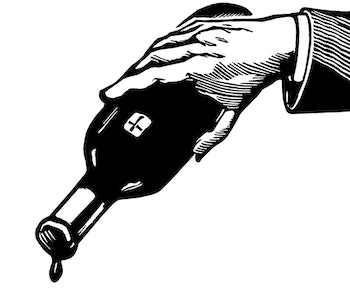 This is not a drill: The next victim of global warming may be wine.

An anxiety-inducing new study suggests that some of our favorite wines (Pinot Noir! Riesling!) will be increasingly unavailable as the climate warms.

According to the study, if average global temperatures rise by two degrees Celsius — that's in line with current trends — more than half of all wine-producing regions could see their crops wiped out entirely. Fortunately, there is some hope: Changing up the kinds of grapes wine producers grow could help prevent a global wine shortage — but you better like Cabernet Sauvignon...

The study paints a bleak future for some of Europe's most famous grape-growing regions, from Bordeaux in France to Tuscany in Italy. The researchers zero in on how climate change is likely to shape the future of 11 grape varieties — Cabernet Sauvignon, Chasselas, Chardonnay, Grenache, Merlot, Mourvedre, Pinot Noir, Riesling, Sauvignon Blanc, Syrah, and Trebbiano.

The study was published this week in the journal Proceedings of the National Academy of Sciences.

Based on when each of the grapes tend to bud and ripen — and how those patterns fit into climate change models — the researchers were able to determine which grapes are likely to fare the worst, and the best, as the Earth warms.

Which wines are doomed?

Three varieties stand out among the results as being particularly endangered: Riesling, Trebbiano, and Mourvedre, or Monastrell.

Riesling is popular for its crisp, dry flavor, while Mourvedre is a highly palatable red you're most likely to find in a red blend or among the Spanish wines under Monastrell. But of the three, a quick look at the global wine landscape suggests Trebbiano may be the most-significant loss.

Trebbiano is also known as Ugni Blanc — aka, one of the most-widely planted white wine grapes in Europe. It is also one of the main grapes used in Cognac and Armagnac — and that includes the rapper's favorite tipple, Hennessy, we're afraid.

Where the wine comes from may also change — Spanish and Italian wines like Rioja and Montelpucciano could become scarce.

Spain and Italy are are set to lose 65 percent or more of their “climatically suitable areas” for growing wine if the planet warms by two degrees Celsius, the study finds. If farmers diversify their crops to hardier grape varietals, the countries will gain a little of that suitable land back — but that amount is less than 10 percent. Time to get acquainted with New World wines, perhaps.

The future of wine

Not all grapes will be affected by climate change in the same way, and some could see very different outcomes based on how much the global temperatures rise.

Overall, Cabernet Sauvignon and Merlot drinkers have little to worry about. Under a two degree warming scenario, those grapes are set to lose among the lowest amount of growable area, according to the paper.

The same goes for Grenache grapes, good news for all you rosé drinkers.

Growers in France, where most of the research was conducted, will have to make some changes to keep up with changing growing seasons and loss of land, said Elizabeth Wolkovich, senior author of the study and professor at the University of British Columbia, in a statement.

That might mean growing heartier grapes like Grenache or Cabernet Sauvignon, instead of the more climate-susceptible Pinot Noir, for example. "Growers in regions such as Bordeaux may swap out Cabernet Sauvignon and Merlot for Mourvedre," she said.

Planting a higher diversity of grape species overall can alleviate half of the potential damage in future where the globe has warmed by two degrees Celsius. Under a four degree warming scenario, the impact could reduce losses by a third, the study suggests.

Already, farmers are readying for the future by embracing agrobiodiversity — planting different types of crops to better the chances of survival — particularly “within-crop diversity,” say the study authors.

Ultimately, the findings highlight the “critical role that human decisions play in building agricultural systems resilient to climate change," the researchers say. That includes getting over some legal and cultural hurdles that stand in the way of these kinds of shifts. Traditional practices and regulations — local and regional — restrict how and where growers can change up their crops, the study authors write.

Hopefully the wine world will sort itself out — but until then, we suggest wine lovers start expanding their horizons beyond the Beaujolais. Soon, you may not have the luxury of choice.

Abstract: Agrobiodiversity—the variation within agricultural plants, animals, and practices—is often suggested as a way to mitigate the negative impacts of climate change on crops [S. A. Wood et al., Trends Ecol. Evol. 30, 531–539 (2015)]. Recently, increasing research and attention has focused on exploiting the intraspecific genetic variation within a crop [Hajjar et al., Agric. Ecosyst. Environ. 123, 261–270 (2008)], despite few relevant tests of how this diversity modifies agricultural forecasts. Here, we quantify how intraspecific diversity, via cultivars, changes global projections of growing areas. We focus on a crop that spans diverse climates, has the necessary records, and is clearly impacted by climate change: winegrapes (predominantly Vitis vinifera subspecies vinifera). We draw on long-term French records to extrapolate globally for 11 cultivars (varieties) with high diversity in a key trait for climate change adaptation—phenology. We compared scenarios where growers shift to more climatically suitable cultivars as the climate warms or do not change cultivars. We find that cultivar diversity more than halved projected losses of current winegrowing areas under a 2 ◦C warming scenario, decreasing areas lost from 56 to 24%. These benefits are more muted at higher warming scenarios, reducing areas lost by a third at 4 ◦C (85% versus 58%). Our results support the potential of in situ shifting of cultivars to adapt agriculture to climate change—including in major winegrowing regions—as long as efforts to avoid higher warming scenarios are successful.