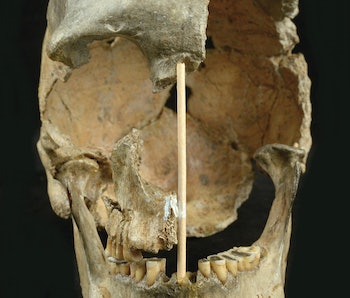 Thousands of years ago, the lives of two different species of humans were forever changed by two distinctly different events.

“For a very long time, it has been intensively debated on how these processes exactly occurred,” Mateja Hajdinjak tells Inverse. Hajdinjak is an associate researcher at the Max Planck Institute for Evolutionary Anthropology and an expert in ancient genomics.

Together, the separate teams present evidence of the oldest Homo sapien remains ever found in Europe. Genetic analyses of these remains reveal a relationship between these ancient individuals and present-day humans — and suggest that mating between modern humans and Neanderthals was dramatically more common than scientists previously thought.

The background — Here’s what we do know:

What’s not well-understood is the extent of interactions between Neanderthals and modern humans, and how exactly these early Europeans form part of the greater story of human expansion outside of Africa.

Adding to the conundrum is the rarity of Homo sapien remains dating to this time period. Even if a scientist uncovers a bone or a tooth belonging to an ancient human, that doesn’t necessarily mean it’s a helpful specimen. After the death of an organism, DNA degrades, “becoming shorter over time and accumulating modifications,” Hajdinjak explains.

After tens of thousands of years of degradation, scientists are excited if a specimen has even a small amount of DNA left to analyze.

What’s new — Five of the seven ancient humans recovered from Bacho Kiro Cave in Bulgaria, are very, very old. Radiocarbon dating conducted by Hajcdinjak and his colleagues suggests these humans existed between 45,930 and 42,580 years ago.

This makes them the “oldest Upper Palaeolithic modern humans that have been recovered in Europe,” the study team writes.

The other Nature study, also conducted by Max Planck Institute researchers, presents a genome sequence pulled from a skull that belonged to a female Homo sapien who lived in the modern-day Czech Republic (Czechia in the study). In this case, it’s the length of the Neanderthal segments in her genome that suggest how old she is: at least 45,000 years.

All of these ancient humans represent some of the earliest Homo sapiens in Eurasia after the migration out of Africa.

Both studies showcase how closely entwined the lives of these individuals were with the fate of the Neanderthals. The DNA of the woman found in Czechia was at least 3 percent Neanderthal. Meanwhile, the genomes of three of the ancient humans found in the Bacho Kiro Cave suggest they had Neanderthal ancestors only a few generations back in their family tree.

This suggests mixing between humans and Neanderthals was more common than previously thought. Before now, evidence of relatively recent Neanderthal ancestry came down to one 40,000-year-old human found in Romania. His DNA suggested to researchers that “Neanderthals and modern humans mixed on more than one occasion and in Europe, as well as at a later point,” Hajdinjaksays. Beyond this individual, the best evidence of Neanderthal-Homo sapien mating was in the DNA of living people.

“Crucially, all IUP [Initial Upper Paleolithic] Bacho Kiro Cave individuals have Neanderthal ancestors around 5 to 7 generations before they lived, suggesting that the admixture between these first humans in Europe and Neanderthals was common,” Hajdinjak says.

The big takeaway — Hajdinjak and colleagues were also able to examine the relationship between the Bacho Kiro Cave individuals and later human populations.

Ultimately, the findings build on a fundamental human truth: We move. We move a lot and we always have. The Bacho Kiro Cave individuals contributed to later populations with Asian ancestry, but it can be assumed other ancient individuals contributed to the DNA of subsequent Eurasians and Europeans. These ancient peoples met and mated with other ancient human species and continued to spread, like ripples on a pond.

With each new discovery, we better understand what it means to be human.

“I have always been fascinated with human prehistory where no written records exist,” Hajdinjak says. “Ancient DNA provides us with an invaluable window to the past — literally like our very own time machine.”

Bacho Kiro Cave abstract: Modern humans appeared in Europe by at least 45,000 years ago, but the extent of their interactions with Neanderthals, who disappeared by about 40,000 years ago, and their relationship to the broader expansion of modern humans outside Africa are poorly understood. Here we present genome-wide data from three individuals dated to between 45,930 and 42,580 years ago from Bacho Kiro Cave, Bulgaria. They are the earliest Late Pleistocene modern humans known to have been recovered in Europe so far and were found in association with an Initial Upper Palaeolithic artifact assemblage. Unlike two previously studied individuals of similar ages from Romania and Siberia who did not contribute detectably to later populations, these individuals are more closely related to present-day and ancient populations in East Asia and the Americas than to later west Eurasian populations. This indicates that they belonged to a modern human migration into Europe that was not previously known from the genetic record, and provides evidence that there was at least some continuity between the earliest modern humans in Europe and later people in Eurasia. Moreover, we find that all three individuals had Neanderthal ancestors a few generations back in their family history, confirming that the first European modern humans mixed with Neanderthals and suggesting that such mixing could have been common.

Ancient skull abstract: Modern humans expanded into Eurasia more than 40,000 years ago following their dispersal out of Africa. These Eurasians carried ~2–3% Neanderthal ancestry in their genomes, originating from admixture with Neanderthals that took place sometime between 50,000 and 60,000 years ago, probably in the Middle East. In Europe, the modern human expansion preceded the disappearance of Neanderthals from the fossil record by 3,000–5,000 years. The genetic makeup of the first Europeans who colonized the continent more than 40,000 years ago remains poorly understood since few specimens have been studied. Here, we analyse a genome generated from the skull of a female individual from Zlatý kůň, Czechia. We found that she belonged to a population that appears to have contributed genetically neither to later Europeans nor to Asians. Her genome carries ~3% Neanderthal ancestry, similar to those of other Upper Palaeolithic hunter-gatherers. However, the lengths of the Neanderthal segments are longer than those observed in the currently oldest modern human genome of the ~45,000-year-old Ust’-Ishim individual from Siberia, suggesting that this individual from Zlatý kůň is one of the earliest Eurasian inhabitants following the expansion out of Africa.

More like this
Science
Jan. 29, 2023
Studying ancient human DNA has unlocked our origins — but the ethics are hazy
By Emiliano Rodríguez Mega and Knowable Magazine
Science
Jan. 22, 2023
The oldest paintings ever found on Earth were not made by humans — research
By Paul Pettitt and The Conversation
Science
Jan. 22, 2023
Humans didn’t evolve to live in cold — our survival is a lesson in ingenuity
By The Conversation, Kyoko Yamaguchi and Laura Buck
LEARN SOMETHING NEW EVERY DAY.
Related Tags
Share: