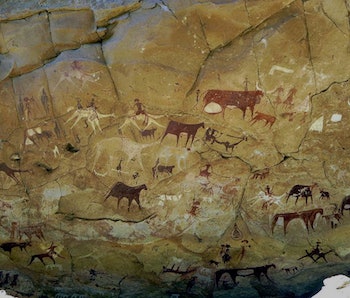 For anyone trying to trace the roots of the human family tree, it would have been very convenient if our ancestors had left Africa in one great exodus, kicking off humanity’s global takeover with a single inaugural bang. And the first time we looked at fossils left behind by our ancestors, that indeed appeared to be the case. Like a series of Foursquare check-ins, the ages of the bones seemed to depict one long human trip out of Africa, across Asia, and into Australia that started 60,000 years ago.

But in recent years, scientists looking back at old fossils with new techniques have revealed discrepancies in the storyline — evidence of much older humans winding up in regions they weren’t supposed to reach for thousands of years, or DNA that isn’t as human as we first thought. A review published Thursday in Science compiles and analyzes all of these deviations from the “Out of Africa” (OoA) narrative, concluding that it’s time for a rewrite.

Doing so was a big break with the “elegant” old theory, says lead author and anthropologist Christopher Bae, Ph.D., of the University of Hawai’i at Manoa, but the evidence he and his team uncovered left them no choice.

“My co-authors and I work in different areas of Asia, and when we sat down and started comparing notes, we kept finding evidence (between 120 ka and 60 ka) of earlier modern human dispersals OoA,” he tells Inverse in an e-mail.

“So what we envision is that although there was likely a major dispersal OoA between 60 ka and 50 ka, which may or may not be due to paleoenvironmental fluctuations, there were waves of earlier dispersals by modern humans as well, though these earlier populations were smaller.”

Bae and his team came to this conclusion after reviewing multiple recent studies showing that humans traveled farther than we would have expected given the OoA time frame. One showed Homo sapiens fossils in China that were somewhere between 70,000 to 120,000 years old. Another found a fossil as far out as Australia dating to 60,000 years ago — which, according to the OoA theory, was when humans were just gearing up to leave for the first time. All of these aberrant finds, taken together, suggested that the original explanation was wrong.

The leading explanation for how these humans got to China and Australia tens of thousands of years before the theory predicted they would is that humans began leaving Africa much earlier than expected, the researchers write. Their new model proposes that there were multiple diasporas from Africa, the first of which might have happened 120,000 years ago.

That’s not to say that the original OoA theory is now entirely moot. New models aside, there’s still a preponderance of fossils dating back to the 60,000-year mark, which suggests that there was a mass dispersal around that time — it just wasn’t the only one.

“The initial dispersals out of Africa prior to 60,000 years ago were likely by small groups of foragers, and at least some of these early dispersals left low-level genetic traces in modern human populations,” said Max Planck Institute anthropologist Michael Petraglia, Ph.D., a co-author on the study, in a statement.

Further complicating the story of human origins is the fact that some of the Homo sapiens fossils scientists have dug up were, unexpectedly, not entirely human. We had assumed for a long time that Homo sapiens branched off from the hominin tree very early on and forever remained separate from our closest cousins, the Neanderthals and the Denisovans. But now, genomic analysis in many studies has revealed that DNA from Homo neanderthalensis and Homo sapiens ssp. Denisova (it’s not clear yet whether they’re a different species or just a subspecies) runs through the genomes of many modern humans, suggesting that the ancient humans who left Africa all those years ago were either a “hybrid” species or fully modern humans that hooked up with other species along their travels, reintroducing those foreign genes.

For now, the researchers point out, the data we have suggests that all current non-African populations can trace their bloodlines back to a single group of humans that broke off of the family tree about 60,000 years ago, which likely represents the big OoA migration scientists long believed was our only move out of our ancestral home. But as researchers continue to uncover evidence of our ancestors in previously unexplored regions, like Asia, there’s plenty we might still learn about the people who dared to leave Africa before that — and who their descendants are today. Bae notes that, already, scientists have found that some two percent of the Papua New Guinean genome contains evidence of modern human dispersals that predate 60,000 years.

“[With] the increasing evidence of an early modern human presence across Asia, the possibility that these earlier dispersals may be detected in modern human genomes increases,” he says.

More like this
Science
6.21.2022 10:45 AM
Ancient stalagmites point to a massive drought that upturned 6th century Arabia
By Allison Parshall
Science
6.22.2022 8:26 PM
Yes, there are mites living on your face — and they can poop, a new study finds
By Allison Parshall
Science
6.27.2022 11:00 AM
Letting your cat go outside could spread “life-threatening” parasites — new research
By Amy Wilson, Scott Wilson and The Conversation
Related Tags
Share: