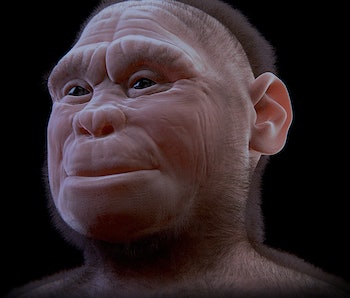 When animals of two different species mate, the creatures produced are bizarre, noteworthy hybrids (wholphins, zonkeys, ligers) that make conservation genetics confusing. Humans, in some sense at least, are a hybrid. A new Nature study confirms our rich and enthusiastic history of swapping DNA with Neanderthals: We interbred 50,000 years earlier than scientists thought, dating the earliest gene flow to about 100,000 years ago. (H. sapiens also mated with a third hominin species called the Denisovans, for good measure.)

But could we have intermingled with Homo floresiensis, the perplexing hobbit-like hominid from Indonesia — that was just proved to be inhuman by a pair of French researchers? Could humans have sex with hobbits? It’s a perverse question with potential genetic ramification so we put it to an expert.

“When archaic groups of humans interacted, this included interbreeding,” Midwestern University anthropologist Karen Baab, an expert on Homo floresiensis told Inverse, adding that it’s currently impossible to know if this did happen.

“There is nothing in particular that rules out the ability of these two species to interbreeding,” says Baab.

The youngest remains of H. floresiensis, in Flores’ Liang Bua cave, are 17,000 years old. Homo sapiens wouldn’t pop up in the same spot for another 5,000 years. Genetic analysis would go a long way toward clearing up that mystery — but the wet and warm Indonesian climate has degraded H. floresiensis DNA beyond our current scientific grasp.

Let’s imagine, hypothetically, sapiens and ancient hobbits met in a real and Biblical sense. Would the fruits of their encounter be healthy and, unlike a mule, fertile? “There is no specific reason to assume that the offspring would be infertile,” Baab says.

The issue is one of divergence. The common ancestor between horses and donkeys lived 4 million years ago. Neanderthals didn’t fully cleave from humans until, at the latest, about 400,000 years back. Humans and H. floresiensis split in a genetic gray area, probably more than 1 million years ago, according to Baab. And with that additional time comes a higher likelihood that genetic incompatibilities could have developed. In short, it’s possible people-hobbit hybrids could have existed. But it’s only possible.

“Until ancient DNA for H. floresiensis becomes available,” Baab says, “it is impossible to address this question beyond mere speculation.”