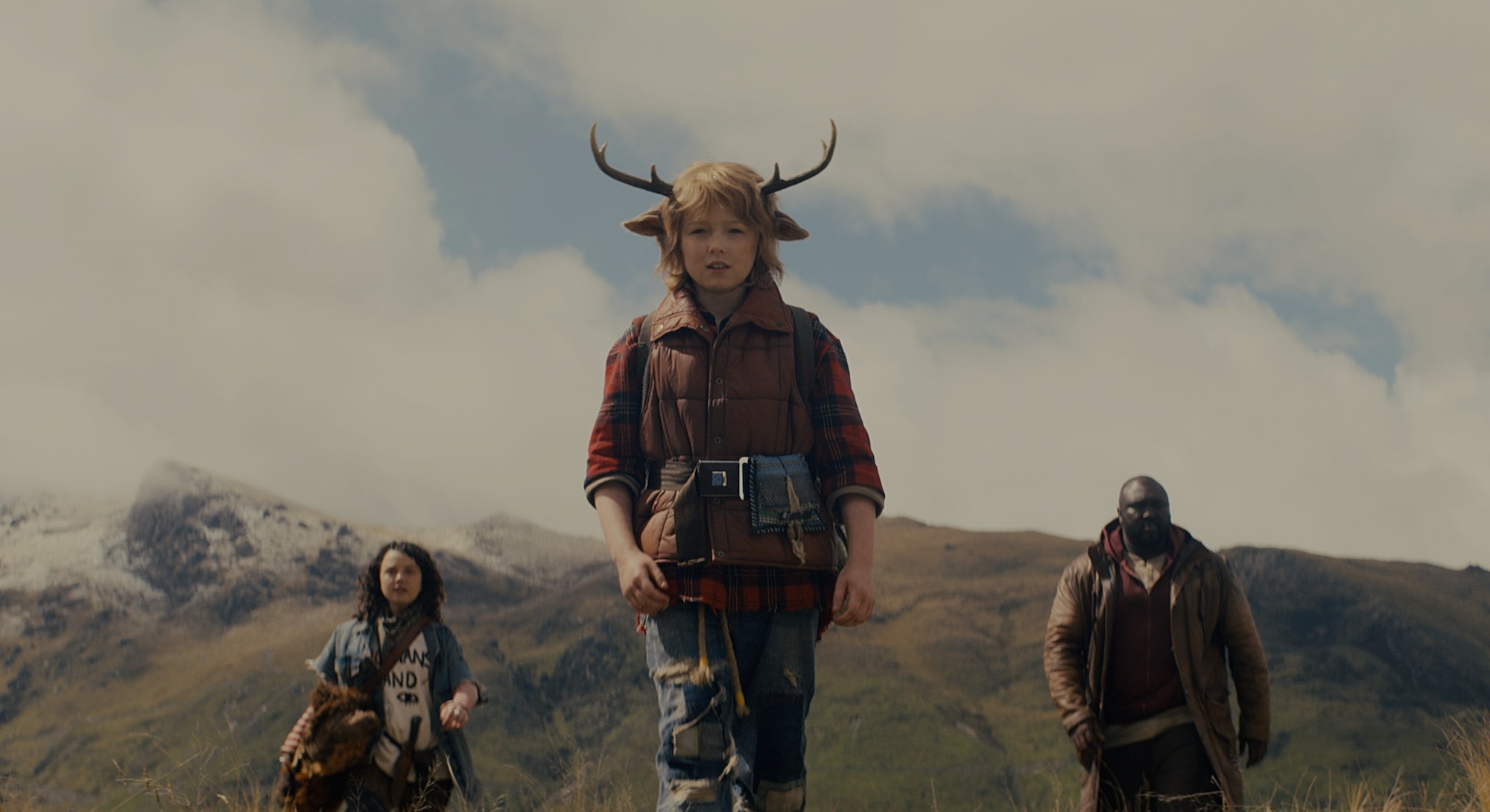 A virus sweeps the planet, devastating humanity and upending life as we know it.

At first glance, the premise of Netflix's sci-fi series Sweet Tooth feels like it’s been ripped straight from the Covid-19 pandemic. But the show (just renewed for Season 2) quickly makes a right turn into science fantasy.

“You see, as the world slipped into chaos, something else was happening. Something extraordinary,” an unknown narrator tells the audience as a nurse presents a befuddled doctor with a baby.

This is no ordinary baby — it has an unmistakably non-human nose, light whiskers, and a thick tuft of fur. Other babies in the hospital sport wings and beaks. The doctors aren’t sure whether the virus or the hybrid animal babies came first, but there’s clearly some sort of correlation.

Meanwhile, a father escapes to the woods, carrying his own hybrid human-animal child, Gus (Christian Convery), safely away from the wreckage of civilization. Years later, Gus embarks on an epic journey to discover the truth of his own origins, and the virus as well.

Human-animal hybrids might seem like beasts from a fairy tale, but these creatures are no myth: they exist in real life, brought to life not through a virus, but the hands of scientists.

It’s probably easier to start by defining what they’re not. While the furry babies in Sweet Tooth are hybrid animal-human creatures, real-life chimeras — organisms that contain two sets of DNA — aren’t necessarily hybrids at all, according to Insoo Hyun, the director of research ethics at Harvard Medical School.

“A hybrid is created when you combine sperm and egg from two different species,” Hyun tells Inverse.

If you fertilized an animal egg with human sperm (or vice versa), that would be a hybrid, though hybrids can also occur between different animal species. Hybrids have “mixed” DNA from both species in every single cell of their body. Think of a mule, for example — a hybrid of a male donkey and a female horse.

Chimeras, on the other hand, do not have mixed DNA in every cell. Instead, “a chimera is an organism that has cell populations in his body that come from at least two different zygotes,” Hyun says. (A zygote is a fertilized egg cell.) Those cells could come from the same species or a different species.

“If it were possible to make organs from patients’ own stem cells, all these problems could be solved.”

Chimeras can occur naturally, and it actually happens more often than you think.

A twin might fuse with its sibling in the womb, for example, and the living twin will carry cells from its sister in the womb. Cells can transmit between a mother and a fetus in the womb, which can stay in the mother after pregnancy, resulting in a phenomenon called “microchimerism.”

But the chimeras seen most often in the news are ones engineered in labs. Scientists create chimeras for a number of different reasons, such as studying organ transplants or treating disease.

However, scientists aren’t playing Jekyll and Hyde. Their research is for legitimate medical purposes — not to create hybrid Frankensteinian creatures like those seen in Sweet Tooth.

Hiromitsu Nakauchi leads research teams at the University of Tokyo and the aim of his lab at Stanford University is to study and grow human cells in animal embryos, which can then be transplanted into surrogate animals. His research could help recipients receive safer organ transplants in the future.

“The main focus of my research is not to create chimeric animals, which are a mixture of human and animal cells, but to use the developmental environment of animals to create organs for transplantation from patients' stem cells,” Nakauchi tells Inverse.

Donor organs are in short supply worldwide, and even if you do get a donor organ, you need to take immunosuppressants for the rest of your life. Creating organs in animal embryos using human stem cells could erase those problems.

“If it were possible to make organs from patients' own stem cells, all these problems could be solved,” Nakauchi says. “I am working on the idea of creating organs from stem cells by using the developmental environment of animals such as pigs and sheep.”

While Nakauchi has been successful in creating rat-mice chimeras, exploring more complex chimeras is a challenge.

“However, because the genetic distance (evolutionary distance) is farther than that between mice and rats, it is difficult to create chimeras between humans and animals,” he says. “We have not yet reached the stage of creating human organs.”

Why are chimeras controversial?

Even though scientists are creating chimeras for valid medical purposes, the subject is still a hot topic of controversy.

In the U.S., animal embryos with human stem cells have been created, but they are not allowed to be brought to term for ethical reasons. The International Society for Stem Cell Research also offers detailed guidelines on the scientific approval of chimera research.

A researcher at California’s Salk Institute also ignited controversy when he published research on human-monkey chimera embryos earlier this year, though the scientists argue they created the chimeras to better understand the progression of disease in humans.

The National Institutes of Health (NIH) also places restrictions on chimera funding, especially anything that could result in neurological changes to the animal’s brain, Hyun says. However, the NIH is currently considering lifting its moratorium on chimera embryo research. The NIH’s restrictions speak to a bigger concern that even non-scientists can understand: the possibility of super-intelligent chimeras. But fear not, Nakauchi says that isn’t going to happen.

“Many people associate chimeras with monsters or worry that we will produce smart pigs, but we do not have to worry about this because we use stem cells that have been engineered so that they cannot become nerve cells or germ cells,” Nakauchi says.

But Hyun has another interesting theory. Chimeras are controversial in real life for the same reason hybrid animal-humans upset the doctor in Sweet Tooth: We think they’re icky. Mixing animal and human cells seems to cross a sort of boundary where it becomes difficult to tell what is human.

The future of chimera research

As real-life experimentation with chimeras takes off in the scientific realm, so too does our fascination with chimeras in the cultural sphere. A24 released a trailer for its upcoming film, Lamb, which appears to feature a hybrid lamb-human child.

But it’s highly unlikely we could ever create a hybrid human animal-child straight out of the womb, as Sweet Tooth suggests.

“In the case of [Sweet Tooth], the interspecies stuff that might happen in the womb is highly unlikely,” Hyun says. “I don't think you would get chimeras developmentally that way.”

Nakauchi agrees, adding that chimeras cannot biologically reproduce: “Chimeras are animals with intermingled cells of mouse and human. It is a one-generation animal, and chimeras do not reproduce and multiply as in the movie Planet of the Apes.”

“The goal of creating transplant for human organs in livestock animals is faltering right now.”

However, as research develops in the future, the possibility of creating chimeras with 50 percent animal cells and 50 percent human cells is a real ethical concern because it raises questions of whether this is now a human embryo or animal embryo.

That’s unlikely too, though, since human stem cells cannot survive for very long in the embryo.

“The goal of creating transplant for human organs in livestock animals is faltering right now because they can't get the human cells to survive for very long,” Hyun says.

So a Sweet Tooth-style future with hybrid animal-human children isn’t likely to happen, but the series does allow us to examine the possibility that engineered human-animal chimeras will become an increasingly important — and contested — part of our scientific future.