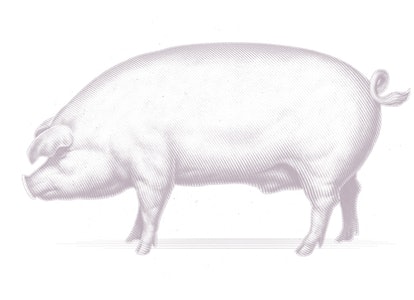 Some parts of the human body are in a state of constant regeneration. Liver cells, for example, are replaced every 300 to 500 days. Fingernails grow every day.

But this aptitude rapidly declines when it comes to replacing essential internal parts of our bodies, ranging from kidneys to muscle tissue.

While organ transplant lists are far from perfect, it is possible to successfully swap one human heart for another thanks to post-mortem organ donations. But the same can’t be said of those suffering from volumetric muscle loss (VML). This is when skeletal muscle tissue has been damaged through injury or illness beyond the point of repair and is incompatible with grafts post-mortem muscle tissue.

However, this problem could soon be solved by unprecedented human-pig chimeras being developed by the University of Minnesota.

Chimeras, named after the mythical lion-goat-serpent monster, are organisms or tissue that include at least two different sets of DNA. Interspecies chimeras have a mixture of genes from parent organisms representing different species. In this case, the chimera is a mixture of human and pig.

The study detailing these new chimeras was published Monday in the journal Nature Biomedical Engineering.

Co-author Mary Garry is an associate professor of medicine at the University of Minnesota’s Cardiovascular Division. She tells Inverse that using CRISPR to create part-human and part-pig embryos with human muscle tissue could one day solve problems stemming from VML.

“VML often occurs due to accidents, surgical resection of large tumors, and servicewomen and men in combat,” Garry says.

“There is no good therapy for VML and the result is limb loss and/or lifelong disability due to lost muscle function,” she explains. “The advance of generating human skeletal muscle in pigs has great promise for benefiting the surgical repair and return of function of VML.”

Why it matters — Previous research demonstrated proof-of-concept approaches to growing human organs in pigs (or rather, pig embryos) but Garry says this research is the first to show how it could also be done with skeletal muscle.

She believes that this approach to developing muscle tissue could have a “seismic impact” on the field of organ transplantation as a whole. “The shortage of organs for heart transplantation, vascular grafting, and skeletal muscle is staggering,” Garry says.

She believes human organized engineered in pigs could:

Here’s the background — Chimera may invoke images of its ancient, monstrous Greek namesake, but despite the carry-over of this name, modern-day chimeras have a much less alarming appearance.

Until 2016, chimera research in the United States was under a strict moratorium by the U.S. National Institutes of Health. It was only in 2017 did scientists first publish evidence of a successful human-pig chimera. These human-pig chimeras were injected with human stem cells and began to successfully grow organs containing human cells.

But in 2017, these chimeras weren’t allowed to grow past the fetal stage of development, meaning researchers didn’t quite know how these hybrid creatures would look if actually born into the world.

That’s a mystery gap the University of Minnesota team has now narrowed down — at least somewhat.

What they did — Instead of growing human organs in their chimeras, the research team instead set out to grow human muscle tissue that could one day be used to organically graft and repair sites of muscle loss where otherwise synthetic approaches have been used.

In their study, the research team developed both interspecies embryos (those with both human and pig cells) and intraspecies piglets (with cells belong to different porcine species.)

This allowed the researchers to inject either pluripotent human stem cells (for example, stem cells that can be coaxed into developing into different types of tissue) or porcine blastomeres (a collection of cells that result from the division of a fertilized egg) in their place to signal to the pig embryo to grow either human muscle tissue or muscle tissue of a porcine relative.

What they found — The intraspecies chimeras were grown to full term and the resulting piglets appeared to be totally normal on all fronts, ranging from the tissue structure to their ability to sniff and roam about the lab.

The researchers report that the human-pig embryos also showed promising results, with human muscle tissue detected between days 20 and 27 of incubation.

But while this success spells promise for potential medical treatments down the road, chimeric experiments involving human cells also set off a lot of alarm bells for bioethicists and novice enthusiasts alike. Namely, how do we know that these experiments won’t create a sentient, human-pig hybrid?

In their experiment at least, Garry says they’ve purposefully given this apocalyptic scenario a wide berth.

“It is important to note that we demonstrate that the human donor cells are located only where the pig skeletal muscle [now genetically deleted] once was,” Garry explains. “The human donor cells do not migrate to the brain or to the reproductive cells of the pig.”

“This information serves to allay important ethical concerns surrounding the production of chimeras,” she adds. “It is also important to note that, in our studies, we did not use human embryonic stem cells. Instead, we used adult-derived human induced pluripotent stem cells, therefore, avoiding concerns regarding the use of embryonic cells or tissues.”

What’s next — As for when you can hope to receive your pig-grown heart or tissue graft in a hospital near you, Garry estimates that technology and regulatory requirements will have both progressed enough in the next 3 to 5 years to start clinical trials of these organ and tissue transplants.

The question of how comfortable potential recipients will be with their porcine alternative is yet to be seen — but Garry argues it has the potential to completely transform the world of organ transplants for the better.

Abstract: Because post-mortem human skeletal muscle is not viable, autologous muscle grafts are typically required in tissue reconstruction after muscle loss due to disease or injury. However, the use of autologous tissue often leads to donor-site morbidity. Here, we show that intraspecies and interspecies chimaeric pig embryos lacking native skeletal muscle can be produced by deleting the MYF5, MYOD and MYF6 genes in the embryos via CRISPR, followed by somatic-cell nuclear transfer and the delivery of exogenous cells (porcine blastomeres or human induced pluripotent stem cells) via blastocyst complementation. The generated intraspecies chimaeras were viable and displayed normal histology, morphology and function. Human:pig chimaeras generated with TP53-null human induced pluripotent stem cells led to higher chimaerism efficiency, with embryos collected at embryonic days 20 and 27 containing humanized muscle, as confirmed by immunohistochemical and molecular analyses. Human:pig chimaeras may facilitate the production of exogenic organs for research and xenotransplantation.

More like this
Science
Jan. 29, 2023
Are coyotes dangerous to dogs and cats? Here’s how to keep your pets safe
By Tara Yarlagadda
Science
Jan. 17, 2023
Why can’t I understand my dog? Recent research may offer an answer
By Tara Yarlagadda
Innovation
Jan. 16, 2023
3D-printed “organs” could lead to better drugs
By The Conversation and Chengpeng Chen
LEARN SOMETHING NEW EVERY DAY.
Related Tags
Share: