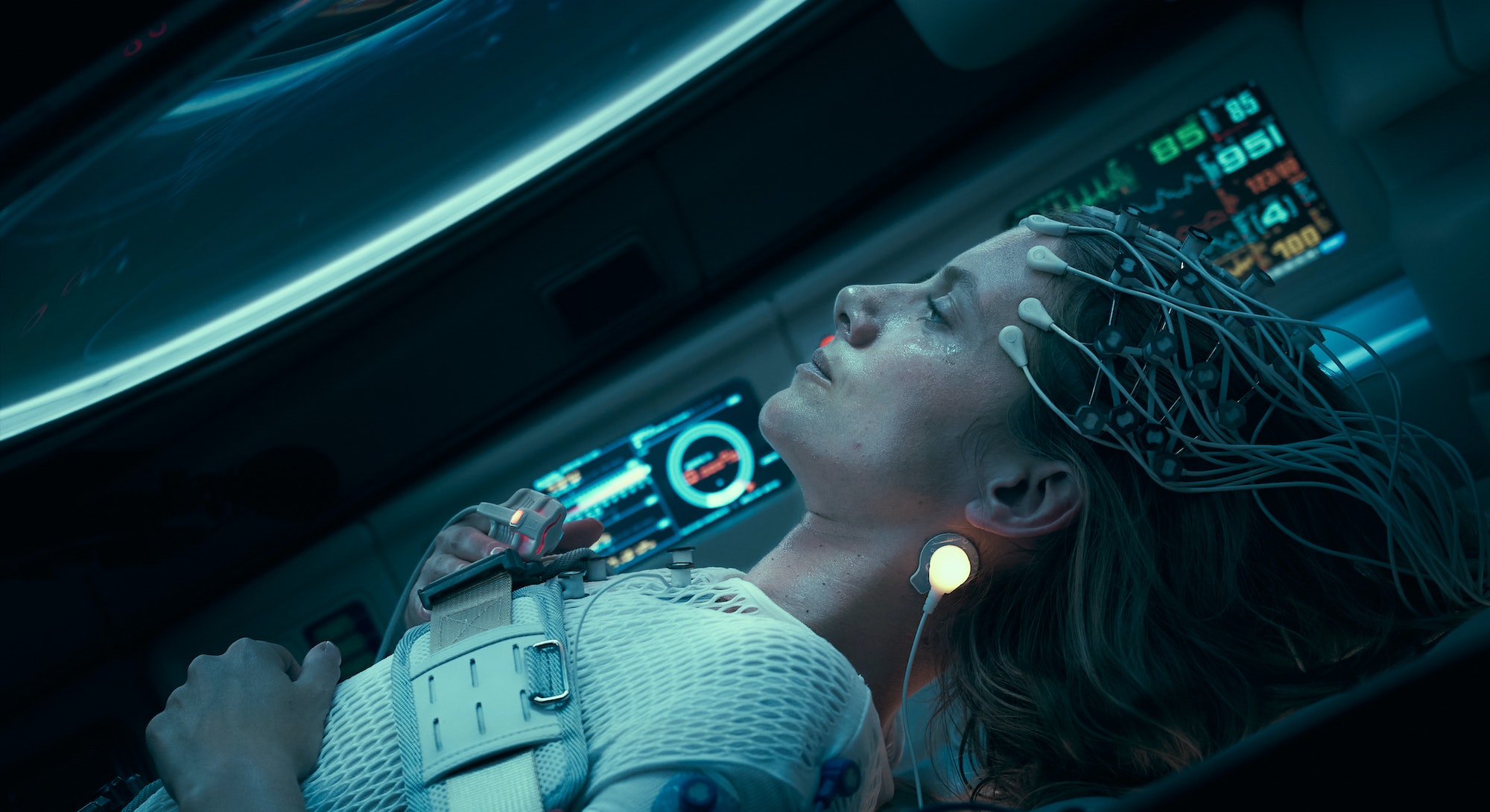 Something is terribly wrong.

In the opening scenes of Netflix’s recent sci-fi movie, Oxygen, Liz (Mélanie Laurent) wakes to find herself encased in a cryogenic chamber. She has no memory of who she is or how she got there.

To make matters worse, Liz’s oxygen levels are rapidly plummeting as she tries to escape. It’s a nightmare scenario — but it’s not pure science fiction fantasy.

“A lot of hospitals in the world now use it when you get wounded by gunshots.”

Aja is not gaslighting the viewer: The cryogenic technology featured in the film is actually being explored right as you read these words.

Oxygen’s cryogenic chamber features an annoyingly matter-of-fact AI named MILO and a holographic screen that makes the movie seem like a product of a futuristic world.

The cryogenics used in medicine today does not come with such extras. But there is another, more controversial application of the technology also being explored today: freezing human bodies with the aim of bringing the dead back to life.

When most people refer to “cryogenics” — the science of freezing things at low temperature — they’re likely actually referring to “cryopreservation.”

Cryopreservation is the process of freezing and preserving a living organism or tissue — human or otherwise — in liquid nitrogen kept at196 degrees Celsius below zero (-320° Fahrenheit).

The goal of cryopreservation is to put the living cells in deep freeze as a form of stasis until they can be thawed and, ostensibly, return to their original state. Freezing biological tissue in this way preserves the cells and prevents decay.

That’s the purpose of the cryogenic pod in the movie Oxygen — it keeps Liz’s body alive using cryopreservation.

There are two cryo techniques:

Slow freezing is a synonym for traditional cryopreservation, which requires slowly cooling down cell tissue until it reaches the appropriate temperature to be kept in stasis.

Vitrification is a more novel approach that has emerged in recent years, which involves cooling tissue very quickly to a vitrified or “glassy state” via freezing methods that don’t use ice. The formation of ice crystals during cryopreservation can later damage tissue’s structure on thawing, so this approach may in some ways be safer.

Cryopreservation has a remarkable range of applications, from preserving avocado toast for future generations to saving endangered fish species from extinction.

But the most exciting advancements in cryopreservations are in medicine — but not for preserving and reanimating the dead.

For years, scientists have used cooling methods known as “therapeutic hypothermia” to treat people who experience cardiac arrest, which occurs when the electrical signals coordinating the heart’s beat go awry.

Some cryo clinics have also developed “whole body cryotherapy” treatments that supposedly have anti-aging benefits — the idea is similar to the theory behind ice baths as means to ease joint pain or muscle stress in athletes or people with chronic pain.

But one of the most impressive real-world feats of cryopreservation was in 2019, when doctors placed a man in suspended animation — when vital activities cease but the body is not yet dead — by rapidly cooling his body down and buying time to perform the life-saving surgery he needed.

Perhaps the most groundbreaking cryopreservation treatments are those used to preserve isolated tissues, organs, and cells. According to recent research, more than 60 percent of organs for heart and lung transplants go to waste because they can only be kept on ice for four hours — often deteriorating before they can reach a human recipient.

Cryopreservation, for example, is used in fertility treatments that involve freezing eggs and sperm cells. But still, preserving organs and other biological tissues in this way is not without dangers. Yet there is hope science may be overcoming this hurdle, too: In 2017, a University of Minnesota Research team found a way to overcome the usual tissue damage that occurs when you thaw out cryopreserved tissue frozen using nanoparticles. Developments like this could improve how we preserve and transport life-saving organs for transplant, and may lead to greater availability of such organs — and more lives saved.

Can Cryogenics Bring Back the Dead?

It’s a question that Oxygen touches upon, but it’s not possible for humans. Or at least — not yet.

For decades, humans have banked on the possibility that their cryogenically preserved bodies may one day be revived. The demand has fuelled the field of cryonics, which promotes freezing people who have recently died to see if, in the future, we may be able to reanimate them.

Writer Robert Ettinger first popularized the concept of using cryonics to save humans from death itself in his 1962 book The Prospect of Immortality. It only took five years for someone to try it for real. James Bedford, who had terminal cancer, became the first human to be cryogenically preserved after his death in 1967. He’s been frozen for more than 50 years and his body is still holding up well in cryopreservation, as far as we know.

There are now some 300 or so people — technically dead — around the world in cryopreservation.

Perhaps unsurprisingly, there are only a few facilities in the world that allow the cryogenic preservation of human bodies. Two are located in the U.S.

The Cryonics Institute also reports freezing nearly 200 pets at the behest of human owners, suggesting that the pet-human bond really does transcend death.

“Bodies are preserved in liquid nitrogen. The goal is to vitrify them, since that does not produce any ice crystals,” Andy Zawacki, Chief Operations Officer at the Cryonics Institute, tells Inverse, describing the process of preserving the bodies.

The language on the homepages of the facility feels straight out of a sci-fi movie like Oxygen:

“Imagine a world free of disease, death and aging. At the Cryonics Institute, we believe that day is inevitably coming and cryonics is presently our best chance of getting there.”

Cryonics proponents refer to the moment one’s heart and breathing stops as “legal death.” But the goal of these operations is to extend life beyond legal death and resuscitate the body long after these essential organs have ceased function.

According to a 1998 article in Cryonics by Brian Wowk, who is currently the chief technology officer of 21st Century Medicine, cryonics proponents consider someone dead when their “brain structure” is destroyed — this is very distinct from the medical consensus on what defines death (although that is sometimes murky, too). Cryonics experts take special care to preserve the brain above all else.

Clive Coen, a professor of neuroscience at King’s College London who has written about cryonics, is skeptical about these notions.

“Cryonics advocates want to persuade us that they can treat a dead person’s brain with antifreeze such that it can be stored in liquid nitrogen without suffering those freeze-fractures. This is delusional,” Coen tells Inverse, stating that such antifreeze procedures would either cause blood vessels to erupt or lead to brain decay.

For their part, the cryonics proponents acknowledge one big caveat: the technology to actually thaw and rewarm preserved bodies isn’t available yet.

“Revival will depend on future technology that has not yet been developed. We do not know if the technology will ever be developed,” Zawacki says.

“However, if it is developed, and people are not preserved, they will not exist to benefit from the developments in technology.” It is one heck of an insurance policy.

Coen explains that even if — a big if — the technology becomes available, the rewarming process would damage “whatever is left of the brain,” anyway.

Fahy is similarly unconvinced about whether we will ever be able to reheat a body successfully, noting that we don’t yet have methods to freeze and thaw individual organs.

“Until these problems have been solved, cooling a living patient would not be expected to result in revival without damage upon rewarming, and so the process would not be approved of,” Fahy says.

Ultimately, the biggest factor in deciding whether you should be cryogenically preserved may not hinge on your probability of revival, but on the overwhelming costs.

Fees range depending on how much of yourself you want to preserve. At the lower end, preserving one’s head or brain can set you back $10,000 at European facility KrioRus, while the entire body costs more than $200,000 at Alcor.

The Ethics and Future of Cryogenics

In 2016, a teenage girl with terminal illness in the United Kingdom sued for — and won — the right to be cryogenically preserved after death. The girl wrote: “I think being cryo‐preserved gives me a chance to be cured and woken up, even in hundreds of years’ time.”

The landmark case marked a turning point in the ethical debate over cryonics..

For example, could the technology one day be offered to living individuals, such as people with terminal cancer who wish to be preserved prior to death. On its FAQ page, the Cryonics Institute says that it hopes cryonics will be performed one day “under carefully controlled conditions, for terminally ill patients.” The idea, it seems, is that in the future there may be a cure.

This is not a primary goal of the facility, however. “I am not sure how cryonics could extend the lives of living people, since they are still living,” Zawacki says.

Fahy muses that the ethics are not clear cut: “If the aim were to do cryonics [...] on a living person rather than waiting for the person to be pronounced dead, that would theoretically be acceptable if the person were going to die anyway in a short time,” he speculates.

Still, it’s not clear whether we should ever use cryopreservation technology to put someone like Liz in Oxygen — who appears to be alive and well (albeit trapped in a pod with her air running low) — into cryogenic preservation.

Even if we could do it, it would have to serve a specific purpose. Some scientists have proposed using cryopreservation to enable astronauts to withstand long journeys in space, including to Mars — a concept that features prominently in the sci-fi movie Passengers. (Without delving into spoilers, space travel does play a role in Oxygen.)

But a 2018 report on deep space travel concluded the downsides to using cryopreservation to enable long-term space exploration, like lack of knowledge about potential side effects, were potentially too great to overcome.

If technology could one day be used to revive frozen bodies, then bioethicists argue that it would redefine the very nature of how we view death. It is worth remembering, however, that the definition of death has shifted with time and technology has played a role in that — once, if a heart stopped beating, that was considered death. Now, we have the ability to restart a stopped heart in many cases.

Perhaps there really is a chance to extend life beyond technical death — after the heart stops beating and the lungs have ceased gasping for air. One day, perhaps. But, for now, that prospect lies strictly in the realm of science fiction movies like in Oxygen.

Oxygen is streaming now on Netflix.