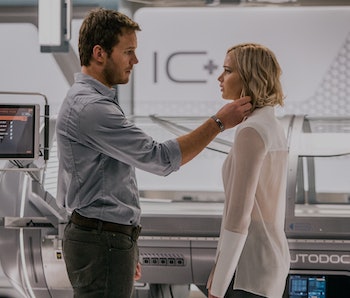 Morten Tyldum’s Passengers — a follow-up to his Oscar-nominated The Imitation Game — arrives in theaters December 21, just in time for a good old-fashioned sci-fi rom-com holiday boost. The early reviews for the film came out on Thursday, and while some critics have been quick to praise the romantic storyline, most see the film as a serious let-down.

Other than sex in space and shiny Apple-esque sets, Passengers offers up two recognizable and supremely attractive stars: Chris Pratt and Jennifer Lawrence, both of whom have solid reputations and excellent hair. Pratt plays handy man mechanical engineer Jim Preston — whose character is garnering quite a bit of negative attention from reviewers. His counterpart is Lawrence’s Aurora Dunn, a writer whose name sounds like it belongs in a romance novel featuring a well-endowed woman on a sunset-lit beach.

Jim and Aurora are passengers (get it?) on the Starship Avalon, a spaceship headed to the new human colony planet Homestead II, when they’re woken up from their 120-year cryo-sleep 90 years too early. They can’t get back to sleep, and are faced with the reality of living their lives together, alone on a starship hurtling through space, for the remainder of their existence.

The reviews are in, and while a couple of critics found enjoyment in Jim and Aurora’s story, most did not.

Empire Online called Passengers “as surprisingly traditional as it is undeniably effective.” Its review focuses heavily on the romance aspect of the film.

“Pratt and Lawrence are magnetic as the literal star-crossed lovers, convincingly seduced by each other over the passage of time; an awkward, space-suit-bumping kiss giving way to a passionate, Cheerios-all-over-the-floor breakfast shag … A timeless romance wedded to a space-age survival thriller, it may be a curious coupling but Tyldum’s Turing follow-up is a journey well worth taking.”

The other overall positive review belongs to Forbes, which calls Passengers “a beautiful motion picture,” furthering it with:

“The film is a character drama, one about the need for companionship and the value of living in the present, that just happens to be a big-budget science-fiction adventure. I wish it were more confrontational regarding individual choices made by certain characters, as the third act conflicts serve as a distraction from and a de-facto absolution of the more pressing emotional/psychological issues at play … It works because the film is gorgeous to look at, because its two top-billed stars command our attention, and because it achieves enough of a rooting interest so that we care about the outcome. It starts better than it ends, and it gives short shrift to its most interesting subject matter, but it is good enough as a Saturday night at the movies option.”

And that’s just about where the good stuff stops.

Entertainment Weekly commends Passengers for doing everything right on paper — “A pair of dependable movie stars, a bullish Oscar-season spot on the release calendar, a director hot off of an Oscar-nominated film” — until it doesn’t at all. The animatronic bartender, Arthur (Michael Sheen), is supposedly “the films only (yes, only) bright spot.” All in all:

“The meet-cute between Jennifer Lawrence and Chris Pratt in Passengers isn’t so cute; it touches on messy ethical questions, and matters of life and death,” writes the reviewer for The Hollywood Reporter.

“Given the imaginative setup and the material’s provocative questions about mortality — not to mention the future of humankind — the movie’s neat lessons about the nature of happiness and a life well lived feel too easy, too obvious. It’s enough to make you wonder if the work that Aurora longs to write has been a self-help book all along.”

Variety says that the film’s set-up is better than its follow-through, a common problem critics seem to be finding with the film. The first half, it seems, is far better than the last.

“There isn’t much to Passengers besides its one thin situation, and there are moments when the film could almost be ‘a very special episode of Star Trek,’ because Pratt, with his golden-boy smirk, has a Kirkian side, and the voyage they’re on is grandiose yet amorphous (like the Enterprise’s) … What’s lackluster about Passengers isn’t just that the movie is short on surprise, but that it’s like a castaway love story set in the world’s largest, emptiest shopping mall in space.”

But it’s The Guardian that most significantly roasts Pratt’s Jim, saying that “stalking tactics bolstering romantic comedies are by no means new, and over the decades, film-makers have proved adept at somehow planing down real-world nastiness, but here it’s gruesomely inescapable.”

“Passengers has another weakness: not so serious perhaps, but not helpful. Even if its narrative was just as preposterous as Passengers, Gravity showed how it was possible to suggest genuine physical jeopardy in a spacebound setting. Passengers’s preoccupation with its romcom chops means that, despite all the fancy electronics and stark minimalist design, actual peril is in short supply … Passengers, unfortunately, has suffered irreparable damage to its own engine casing.”