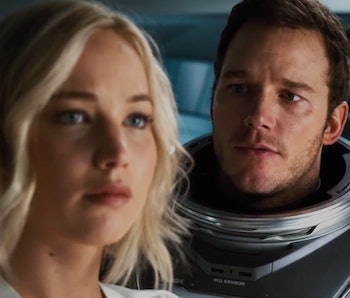 Every trailer for Passengers has one scene in common: Chris Pratt runs around a massive space ship asking if anyone’s there until suddenly a wild Jennifer Lawrence appears, fresh from a sleep pod. Both she and Chris Pratt have awakened too early … by about 90 years. The pair soon get caught up with the small and simple task of saving themselves and the roughly 5,000 other people still on board a ship in the midst of a 120-year journey to a new colony planet. But what if they hadn’t gotten ensnared in an interstellar crisis? Jennifer Lawrence and Chris Pratt would have had a lot of time on their hands and no other company than a malfunctioning robotic bartender played by Michael Sheen. Let’s take a moment to ponder how exactly they would have wiled away the rest of their lives, other than give Ross and Rachel a run for their money on the “will they, won’t they, will they again” front. Here’s 18 ways Chris Pratt and Jennifer Lawrence probably would have spent 90 years in space:

1. Trying on endlessly beautiful yet monochromatic clothes out of whatever closet functions like a string of scarves tied together by a magician.

3. Wondering where Michael Sheen’s pants are.

5. Drawing on people’s faces via the windows of the sleep pods.

6. Trying to hold hands awkwardly through a space suit while having a romantic picnic outside.

7. While arguing over whether it’s still called moonshine when you’re in space.

8. And then fighting over the last slice of whatever passes for pizza on a 90-year expedition to a new colony.

9. Role-playing a different ending to The Hunger Games.

10. Naming new incredible astronomical discoveries after themselves and only themselves. There are currently 75,379 stars named “Second Pratt to the Right.”

12. Debating over whether to wake up more people or just finally put pants on Michael Sheen and call it a day.

13. Playing the shortest game of telephone in the history of humankind.

14. And somehow still fucking up “Bye, Bye Li’l Sebastian” even though there are only two people playing.

15. Posting selfies on a social media network for two. The group text is lit.

16. Screaming into the void because they realize they’ll never see their family or friends every again.

17. Realizing the Ross/Rachel “will they, won’t they” is even less fun when it’s happening to you.

Find out what actually happens in Passengers when it hits theaters December 21.

More like this
Entertainment
Feb. 1, 2023
In Knock at the Cabin, a Terrific Dave Bautista Saves M. Night Shyamalan From Himself
By Hoai-Tran Bui
Entertainment
Jan. 26, 2023
Attack the Block sequel will take a page from the two greatest sci-fi sequels, director says
By Eric Francisco
Entertainment
Jan. 25, 2023
Infinity Pool is a hedonistic head-trip
By Isaac Feldberg
LEARN SOMETHING NEW EVERY DAY.
Related Tags
Share: