“What keeps people fighting in their darkest moments?” 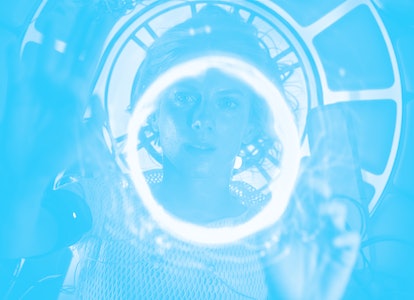 Oxygen is a much bigger story than it seems. The new French sci-fi thriller on Netflix begins as just the tale of Liz, a woman who wakes up in a cryogenic pod with no memory and a slowly declining amount of oxygen. But by the end, the story is much larger than Liz or even her life’s work. It’s the story of the human race trying to cling to survival in an inhospitable world.

Confused by the ending? We’re here to help. Read on to learn how the film’s director interprets it.

Warning! Major spoilers for Oxygen ahead!

Oxygen director Alexandre Aja signed onto the film three years after pre-production started, but he has a deep love of the story and how the survival elements echo the human spirit especially during this global pandemic.

“I've always been fascinated by how we somehow transcend our limits,” Aja tells Inverse. “What keeps people standing when they’re probably going to die? What keeps people fighting in their darkest moments?”

We see those questions answered explicitly as Liz records an audio message for her husband Leo just as she’s about to run out of air. She tells him she’ll cherish the memories she has of them, even if they’ve never met each other. That spurs her to find a solution to her problem and save her life.

As it turns out, Liz has only been alive for 102 minutes. She’s one of 10,000 Omicrons, genetically engineered clones created to populate a new planet for the regeneration of the human race. Liz’s husband, Leo, died on Earth of a deadly virus. But the Omicron version of him survives, stuck in stasis for when the ship filled with pods arrives on their new planet, Wolf 1061c.

It’s a great twist ending for a science-fiction movie, but there’s more real science in it than you may think. Wolf 1061c is a real planet, tidally locked so one side is always illuminated, one side always dark. The thin strip in between the two could be habitable, but the star is 13.8 light-years away, therefore creating the need for cryogenic stasis for the long journey.

But is the journey successful? At the end of the film, we do see Leo and Liz embracing on a beach with a nearby planet looming overhead. Though technically, these aren’t really Leo and Liz. Their real love story ended when Leo died back on Earth, leaving Liz to grow old and continue her research on memory transplanting.

Therefore, Oxygen has two endings: a tragedy caused by a pandemic, and a new beginning for both the connection between Leo and Liz and the human race as a whole. But which ending does Aja intend to be the “real” one?

“It's a weird thing,” he says, “because I want to be on the optimist side and I want to believe that actually their love story succeeded, but at the end, I think that the movie is really a battle.”

In a story where two versions of the same characters can co-exist, maybe two different endings can too. Aja leaves it up to the viewer to choose how they think the film ends.

“It's almost like a life after death,” says Aja. “Both characters are dead to the original characters. I don't know exactly who those two people are and if they're really themselves, or just a fake version of themselves. I think that everyone will have a different interpretation of what it means.”

Oxygen is now streaming on Netflix.

More like this
Science
8.5.2022 1:00 PM
The most miraculous sci-fi movie on Netflix reveals a scientific debate over aging
By Tara Yarlagadda
Culture
7.26.2022 11:30 AM
You need to watch Christopher Nolan’s most important sci-fi movie before it leaves Netflix next week
By Alex Welch
Culture
15 hours ago
You need to watch the grittiest alien invasion movie on Netflix ASAP
By David Grossman
Related Tags
Share: