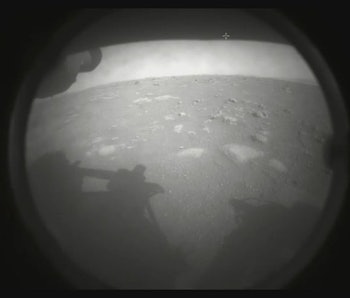 By the time you are reading today's Inverse Daily, NASA's Perseverance will have already begun on its incredible journey along the Martian surface. That's right, if you haven't heard yet, let me be the first to tell you: Perseverance appears to have survived its seven minutes of terror and has begun its exploration of the planet. We couldn't be happier to tell you that Mars Week is ending in a celebration.

What's at stake in the Perseverance mission? Well, it is humanity's best shot yet at understanding if Mars has ever hosted life, just to name one thing. Check out our lead story for more.

Rounding out our Mars Week is the question of the week: Your bags are packed with all the essentials and your ticket to Mars is safely attached to a magnet on the fridge. There's room for one more thing. What's the one thing you would need to bring to the Red Planet? Be it sentimental or practical, we want to hear about it.

Respond in our Google form, and we'll post our favorite answers next week!

This is an adapted version of the Inverse Daily newsletter for February 19, 2021. Subscribe for free and earn rewards for reading every day in your inbox.

Perhaps nothing symbolizes the terror and wonder of space more than a black hole.

The first-ever photo of a black hole, taken in 2019, offered a glimpse of dark center encased in a fiery ring that can bend space and time with its incredible gravitational pull. Our knowledge of these strange beings is constantly evolving. The black hole from the 2019 photograph, for example, has since been found to be wobbly.

What they're saying: “It would take you an hour to drive across it!” —James Miller-Jones, the science director of the Curtin Institute of Radio Astronomy, to Inverse.

Bees operate with a hive mind, less a collection of individuals and more like a single super-organism. And it turns out that that super-organism is one giant cheater.

A new study published in the journal Proceedings of the Royal Society B found that while honeybees (Apis mellifera) are capable of using numerical strategies on cognitive tests, they actually often deploy continuous (non-numerical) clues to “cheat” on these tests.

Researchers were trying to figure out a singular question: Do honeybees actually use “numerosity” or number processing to solve problems? Or do they use continuous (visual) shortcuts to complete tasks? It has befuddled researchers for years, but now they are getting some answers.

What they're saying: “Our study provides information on which cues and strategies bees used to solve a numeric-based task.” —Olli Loukola, a behavioral ecologist at the University of Oulu, to Inverse.

Bees are learning the best way they know how →

If you drink coffee, you probably don't need any encouragement to drink more. People rely heavily on the drink to help power them through their workday, and also to just relax with a tasty cappuccino. But even if you're already drinking the brown stuff, Inverse can help you maximize your coffee's usefulness.

What they're saying: “Our study indicates that moderate coffee intake can mitigate some repercussions of reduced sleep over a few days. However, this is not a substitute for a good night's sleep in the long term.” —Denise Lange, Department of Sleep and Human Factors at the Institute of Aerospace Medicine and German Aerospace Center, discussing one of the studies mentioned within.

Get the most out of your cup of Joe →

The first great TV show of 2021 is without a doubt WandaVision. Marvel's ode to sitcoms has developed into so much more. Throughout the show's run, Inverse has been keeping fans occupied with fascinating theories and ideas about what could be coming next and how the show is connected to the deeper world that Marvel is still in the process of building.

As soon as you're done with the latest episode, check out all the breakdowns on Inverse.

A matter of time — You likely have the wrong idea about time management, researchers say

File this one under corny but true: time is our most valuable resource. So valuable, in fact, that we can very easily stress ourselves out while trying to get more of it.

When you think of the words “time management,” do you imagine squeezing more work into your schedule, taking more efficient breaks, or waking up earlier in the morning? While some of those strategies may increase your productivity, they’re also likely to stress you out and may not be the most efficient way to think of time management.

That’s according to Concordia University’s John Molson School of Business graduate researcher Brad Aeon, who, with his colleagues in the marketing and management fields, recently conducted a meta-analysis of time management literature, looking at four decades worth of data from 158 separate studies spanning six continents and involving more than 53,000 respondents. Their conclusion, recently published in PLoS ONE, boils down to one thing: We think about time management all wrong.

What they're saying: “I would define time management as the ability to structure, defend, and optimize your time so that your schedule becomes a reflection of your values, beliefs, and philosophy.” —Brad Aeon, graduate researcher at John Molson School of Business at Concordia University, to Inverse.

How do you work when you're running out of time? →

Touchdown — NASA's Perseverance rover has touched down on Mars

It worked. Years of careful planning, building, and preparation all paid off. On Thursday, NASA's Perseverance rover touched down on Mars at 3:55 p.m. Eastern time after traveling through space for nearly seven months.

Now we get to the fun stuff. From here, the rover will begin its 687-day mission on Mars, the equivalent of one Martian year, packed with a unique set of tools aimed at finding signs of ancient microbial life on Mars.

Check out the Inverse breakdown of everything that happened at launch and what comes next.

What they're saying: “Hello, world. My first look at my forever home..” —@NASAPersevere sending out its new tweet from the most exclusive location in the Solar System.

The landing that could change our understanding of life →

And if you're looking for more, make sure to check out the best found-footage sci-fi movie on Netflix.

More like this
Science
11 hours ago
Physicists demo a sci-fi-inspired laser that mimics a classic UFO trick
By Evan Gough and Universe Today
Science
13 hours ago
This concept spacecraft could swiftly send a one-ton spaceship to the edge of the Solar System
By Matt Williams and Universe Today
Science
Jan. 26, 2023
An asteroid will come within 2,200 miles of Earth tonight — here’s why you shouldn’t worry
By Jennifer Walter
LEARN SOMETHING NEW EVERY DAY.
Related Tags
Share: