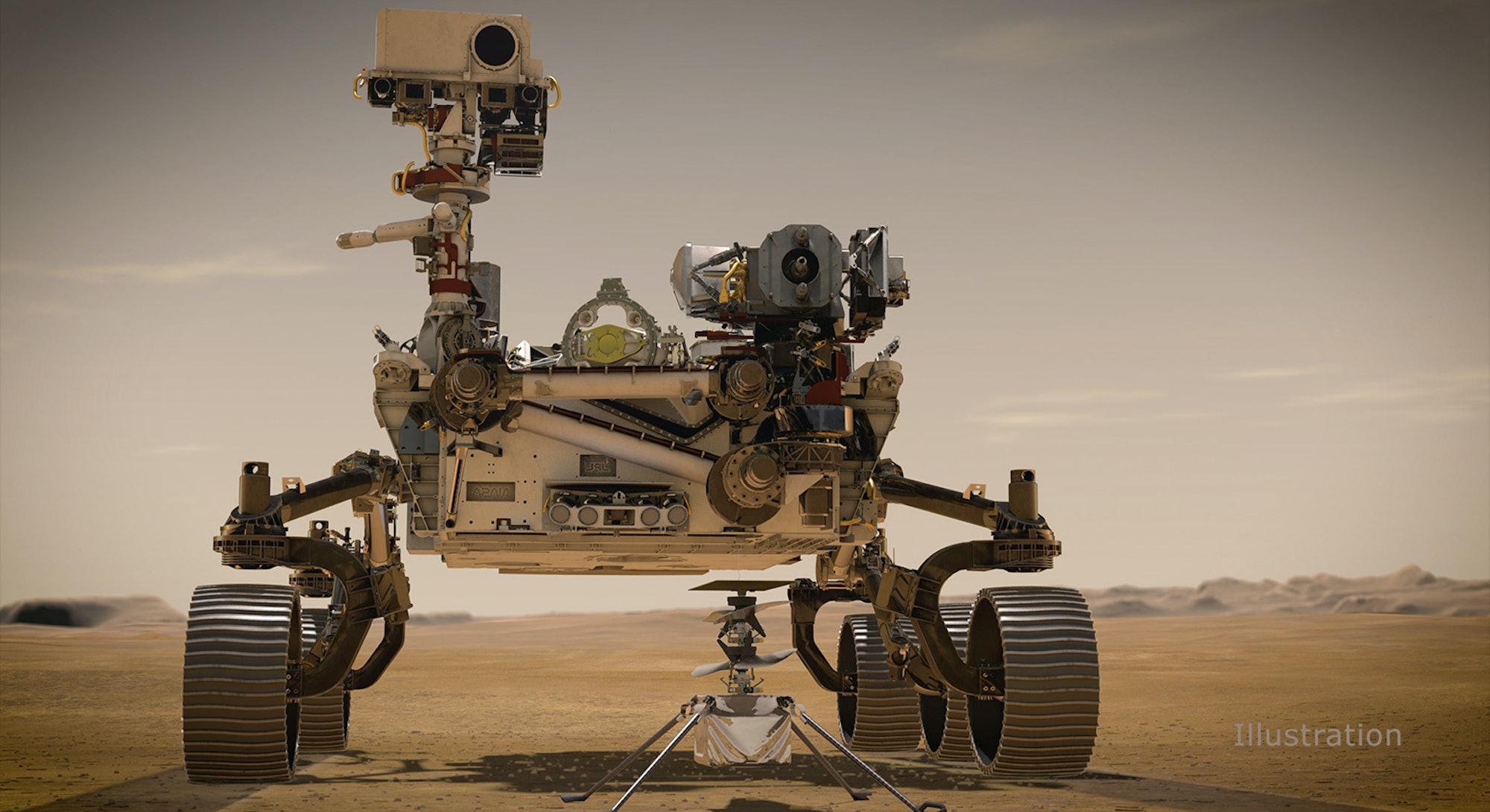 On February 18, an SUV-sized robot will touchdown on the surface of Mars. After “seven minutes of terror,” NASA's Perseverance rover will begin on its quest to answer one of humanity's most pressing questions: Does life exist beyond Earth?

NASA's Perseverance rover is the first step in a campaign to bring back samples of dust and rock from the Red Planet to Earth. The reason: Mars is believed to have been habitable during its early history — and the lasting signs of this habitability should still be visible in its rock.

But what if this free-wheeling astrobiology lab goes hunting for life — and it's not actually there? If Perseverance's quest fails, scientists may have to rethink what causes life to bloom on a planet. All the signs suggest Mars once had the right conditions for habitability — but if the rover comes up empty, perhaps there is something scientists are missing: A "magic spark," needed for life to flourish.

What is the goal of the Perseverance mission?

NASA's Perseverance rover launched on July 30, 2020 armed with tools to help it explore the surface of Mars including nine drill bits that the rover will use to collect samples of Martian rock and dust.

The samples move through the belly of the robot, and into the Adaptive Caching Assembly System, where they are assessed and processed. The assembly system contains seven motors, and more than 3,000 parts including the Sample Handling Arm that the rover will use to hold sample tubes.

NASA has previously sent four rovers to the Red Planet, one of which is still roaming the Martian surface. Perseverance is unique in that it is armed with a new toolset designed specifically to resolve the burning question of whether or not life once existed on Mars.

Mars is arid, dusty, and desolate today. But evidence collected by previous Martian missions suggest the Red Planet was once a warm, wet planet, with conditions similar to those on Earth today. In other words, Mars likely was habitable during its earlier years. This is where Perseverance comes in.

On Thursday, Perseverance will land in the Jezero Crater — a 28-mile wide, 1,600-foot deep crater located in a basin slightly north of the Martian equator. Jezero Crater once housed a lake estimated to have dried out 3.5 to 3.8 billion years ago. This is important — Jezero dried up at about the same time the entire planet lost both its water and its atmosphere. In turn, Jezero is now the ideal location for Perseverance to hunt for signs of past microbial life.

Previous missions to Mars have never managed what Perseverance hopes to accomplish: Collecting samples of rocks and soil, and setting them aside for the first-ever sample return mission to Earth from another planet. The rock samples will be stowed away in tubes, cached in an easily identifiable place on the Martian surface, and left to be returned to Earth by a future mission.

Jonathan Lunine, chair of the Department of Astronomy at Cornell University, says we will likely not get the answer to the question of whether or not life ever existed on Mars until the 2030s, when those samples will likely return to Earth for analysis.

"This is really the first opportunity to look for life," Lunine tells Inverse. "We don't know whether it's easy or hard for life to form."

Hunting for life on Mars

In order to confirm whether or not life existed on Mars, Perseverance will look for three things.

"It would be a fabulous scientific discovery to find that life existed beyond Earth, and it would also be a very important discovery for humanity in general," Ken Farley, Mars 2020 project scientist, said during a NASA briefing on the mission on January 27.

"Even if we don’t find evidence of life, that’s important, too."

Essentially, Farley says a negative result from the Perseverance mission is not a failure, per se. Rather, "that would be a unique discovery," Farley says.

"It would tell us something important, that habitability alone is not sufficient, that something else has to be present. Perhaps some magic spark that causes life to occur."

As for what the magic spark is, Farley is not yet sure. We have studied life on Earth for centuries, but scientists have a rough idea at best of how life began on our planet. It is unclear whether life is a common occurrence throughout the universe, or a rare result stemming from the right mix of ingredients at just the right time — which happened to take place on Earth.

Part of the problem is sample size. Scientists base all of their conditions for habitability and life based on the only planet they know life has occurred: Earth. As a result, they look for the same signs in the cosmos as foster life on our planet, like water, an atmosphere, and ideal temperatures.

Even our own planet presents a complex picture on which to base assumptions. There are places on Earth once deemed uninhabitable and having shown no signs of life, like hydrothermal vents on the ocean floor, which has tube worms adapted to extreme temperatures (among hundreds of other species there.)

"If you do find life as you don't know it, the number of places where life may exist in the universe explodes."

Alexander Hayes, director of the Cornell Center for Astrophysics and Planetary Science, says not finding life on Mars introduces a whole new host of questions about how we define habitability and life on Earth.

"They're questions that you can't theoretically answer, they have to be answered through exploration," Hayes tells Inverse.

"If you determine that there was a habitable environment on Mars … what's the probability that life occurred? That's not something you could test. That's an exploration driven question."

Life as you don't know it

Besides Mars, scientists have identified other places in our Solar System where life could possibly occur, or have occurred in the past. These include Jupiter's moon Europa, as well as Saturn's moons Titan and Enceladus. All three are believed to have subsurface oceans, while Titan also has lakes of liquid hydrocarbons on its surface, and has a substantial atmosphere.

"If I were to tell you where to look for life, I'd say, ‘Well let's look for places where it's like Earth,’" Hayes says.

"But can you have life as you don't know it?" He asks.

Titan's rivers, lakes, and seas are made of liquid methane and ethane. But scientists believe its extreme bodies of liquid could serve as a habitable environment for some form of life to thrive.

"Maybe chemistry can evolve to the level of life in liquid methane and ethane," Lunine says. "There are issues with methane that make it a bit more difficult than water, but we just have to use our imagination."

"We being humans, we don't have a second example of life — and so it's hard to imagine a complete set of molecules that might work in a very exotic environment," he says.

If we were to find life in an environment other than water, it would have implications on how we define life itself, and how we look for it in the universe.

"If you do find life as you don't know it, the number of places where life may exist in the universe explodes," Hayes says.

"But before you have to go that far, you still have to explore the question of whether there's life as you know it on Mars in the past."

Until the samples collected by the Perseverance rover are retrieved and analyzed, we won’t know for certain if there was life on Mars. And whether or not life exists on Mars greatly affects not only how we view life outside of Earth, but how we look at our own existence on our home planet — and what makes life on Earth so special?