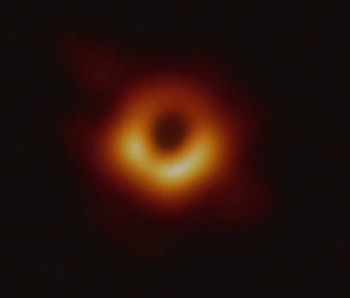 On Wednesday, a team of astronomers, physicists, and astrophysicists showed the world the first-ever picture of a black hole. The black hole in question, which lies at the center of the galaxy Messier 87, is 55 million light-years away from Earth. This makes the photograph not only the first one ever taken of a black hole but also something of a time machine into this particular black hole’s distant history. The picture appears as the empty core at the center of a bright ring of matter.

“We’ve been studying black holes for so long, that it’s easy to forget that none of us has ever seen one,” France Córdova, director of the National Science Foundation, told reporters. The NSF funded the project, which captured the image in April 2017, but Córdova hadn’t seen the picture before Wednesday’s announcement.

“This was the first time I’d seen this image, right now, and it did bring tears to my eyes,” she said.

Of course, the black hole itself can’t be “seen,” since black holes engulf all matter and light around them, but the bright ring in the picture is formed by super-heated matter as it’s about to fall in, showing the unmistakable signature of a black hole.

Shep Doelemen, the EHT project director, told reporters that the final image confirms the theories and models that scientists have long suspected about black holes, bringing into the realm of human understanding an astronomical phenomenon that had previously only been hypothesized.

“We’ve exposed part of the universe we thought was invisible before,” said Doeleman. Even though the image confirmed scientists’ expectations, he said he couldn’t help but feel a bit of shock amid the satisfaction.

“We’ve been at this for so long, and there was such a buildup, there was a great sense of relief, but also a surprise.”

More like this
Science
7 hours ago
What Mysteries is the Universe Hiding from Us? A Cosmologist Weighs In
By M. Mitchell Waldrop and Knowable Magazine
Science
Jan. 22, 2023
Supermassive black holes may be bigger and more powerful than we previously knew
By Jeff Nagle
Science
Feb. 4, 2023
Astronomers May Be on the Cusp of a “Potentially Revolutionary” Cosmological Breakthrough
By Universe Today and Matt Williams
LEARN SOMETHING NEW EVERY DAY.
Related Tags
Share: