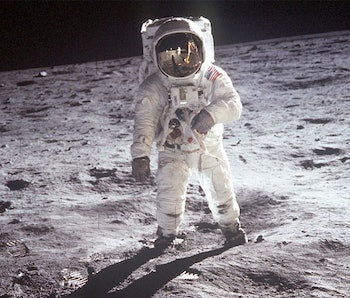 NASA’s budget for the forthcoming fiscal year may receive a major boost, funding the agency’s plans to return to the Moon and lead the first human mission to Mars.

On Monday, United States President Donald Trump announced a $25-billion investment in NASA as part of the administration's budget request for the fiscal year beginning in October, 2020.

The sum is a 12 percent increase on NASA’s current budget. The money is earmarked for the agency’s 2024 Artemis manned Moon mission, and a proposed human mission to Mars within the next decade.

“This is a 21st century budget worthy of 21st century space exploration and one of our strongest budgets in NASA history,” NASA Administrator Jim Bridenstine said during a press conference Monday. As he spoke, the crowd chanted, “Go NASA! Go America!”

Bridenstine made the remarks during a ‘State of NASA’ address from the Stennis Space Center in Mississippi. The Center happens to be where the Artemis mission's Space Launch System rocket is gearing up for a series of tests ahead of a planned test flight in the year 2021.

How the money breaks down:

A big winner from the budget proposal is NASA’s Artemis program, which seeks to return humans to the Moon. It is scheduled to land the first woman and next man on the lunar surface by the year 2024.

The proposed budget directs $3.3 billion for a human landing system on the Moon, designed to transport astronauts between the lunar surface and a gateway to the Moon.

“This is the first time we have had direct funding for a human lander since the Apollo Program,” Bridenstine said. “We are serious about our 2024 goals, and the President’s budget supports our efforts to get the job done.”

The budget would fund a Mars sample-return mission, which is scheduled to follow NASA’s Mars 2020 rover mission. The rover is set to make its way to Mars in July of this year. After it lands on the Red Planet, the as-yet-unnamed 2020 rover will collect samples of rocks and soil from the Martian surface, and set them aside for a future return to Earth. The money would fund this return mission.

If successful, it will mark the first time Martian samples have made their way to our planet.

Eventually, NASA hopes to be able to send a human mission to Mars to conduct similar studies in-situ. The sample-return mission is a crucial first step to making that dream a reality in the next ten years, the agency says.

There were hints NASA could win big in this budget. In his State of the Union address on February 4, President Trump said, “I am asking Congress to fully fund the Artemis program to ensure that the next man and first woman on the Moon will be American astronauts, using this as a launching pad to ensure that America is the first nation to plant its flag on Mars."

“If the President’s support for NASA wasn’t clear before, it should be obvious now,” Bridenstine said. “[The administration's] support for what we are doing is not empty rhetoric. They are backing up our vision of a renewed era of discovery by giving NASA every increasing budgets every year and now we must deliver.”

Commercial spaceflight — from the US

NASA isn't the only space organization that could benefit from the 2021 fiscal proposal. The planned budget also supports commercial crew spaceflight from the US, including the future launch of more astronauts to the International Space Station with the help of private companies like SpaceX.

“We soon will launch American astronauts on American rockets from American soil for the first time in nearly a decade,” Bridenstine said.

Currently NASA transports astronauts to the ISS using Russia’s Soyuz spacecraft, which take off from sites in Europe. But the US would like to change that.

The proposed budget still needs to be approved by Congress, so it is unclear whether NASA's ambitions will be fully funded as hoped. But if they are, then the next few years may be game-changing for the future of human space exploration.