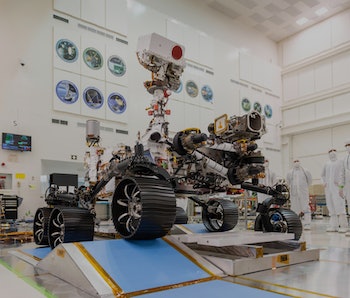 In order to navigate through the bumpy, rock-littered surface of Mars, one needs to be an experienced driver. Thankfully, NASA’s Mars 2020 Rover has proven itself up for the task, passing its first driving test with flying colors.

The Mars 2020 Rover sailed through its preliminary assessment test on December 18, a first ‘roll’ as it prepares for launch in July or August 2020. In the assembly facility at NASA’s Jet Propulsion Laboratory in Pasadena, California, a group of engineers watched closely as the rover rolled forward and backward, and performed a full, graceful pirouette over a period of 10 hours.

“Mars 2020 has earned its driver’s license,” Rich Rieber, a lead engineer for Mars 2020, said in a statement. “The test unambiguously proved that the rover can operate under its own weight and demonstrated many of the autonomous-navigation functions for the first time. This is a major milestone for Mars 2020.”

The test is part of the prep for NASA’s Mars 2020 mission, part of the agency’s Mars Exploration Program. The mission aims to answer one of the most important questions scientists have about the Red Planet — whether or not it once hosted life.

The now desolate planet may have been home to some form of life during its early history, a theory supported by mounting evidence of surface water having once existed on Mars.

The Mars 2020 Rover will look for signs of habitability on the Martian surface and past microbial life, collecting samples of rocks and soil and setting them aside for a future mission to return them back to Earth.

The Rover will also test out conditions for possible human exploration of Mars by trialling a method of producing oxygen from the Martian atmosphere, characterizing environmental conditions such as water and dust on Mars, and looking for resources.

The rover is set to spend at least one Martian year on the planet — the equivalent of 687 days on Earth.

But if it’s anything like its predecessors, it will likely spend a little longer on the Red Planet. NASA previously sent two other rovers to Mars, Spirit and Opportunity (the Mars 2020 Rover will soon get its own name).

The robotic twins landed on Mars in January, 2004. Spirit ended its mission in 2010 — way past its planned 90-day expedition on the planet — while Opportunity tragically lost contact with Earth in 2018 after a massive dust storm swept over Mars.

The Mars 2020 Rover is designed to be more autonomous than its predecessors, making more driving decisions for itself. It is also equipped with higher-resolution navigation cameras, an extra computer “brain” for processing images and making maps, and a more sophisticated auto-navigation software.

It will also be able to travel around 650 feet in the course of one Martian day — a new record for Mars rovers made possible with a more durable set of wheels.

“To fulfill the mission’s ambitious science goals, we need the Mars 2020 rover to cover a lot of ground,” Katie Stack Morgan, Mars 2020 deputy project scientist, said in a statement.

More like this
Science
19 hours ago
25 years ago, NASA landed its first rover on Mars — and catalyzed the search for life
By Doris Elín Urrutia
Science
13 hours ago
NASA just built the best map of Mars to date using 51,000 images
By Evan Gough and Universe Today
Science
6.30.2022 10:00 AM
Behold! Curiosity discovers Martian rocks contain an essential ingredient of life
By Allison Parshall
Related Tags
Share: