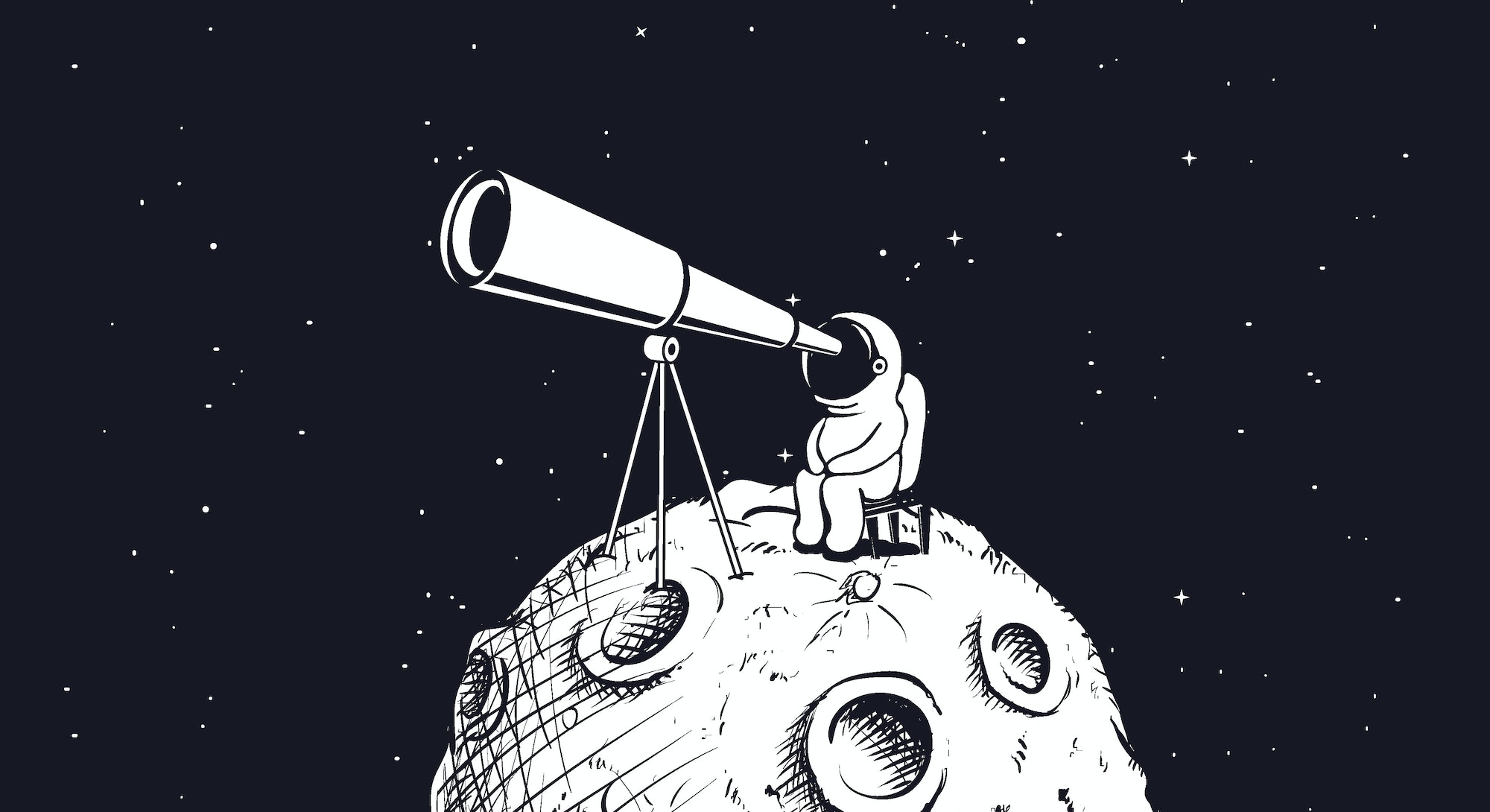 The Moon isn’t merely a symbol of our humanity’s future in space. The Moon is the literal destination.

His vision for the Moon, specifically, is a new vantage point for radio astronomy, the field of research that studies celestial objects that put out radio waves, including those that are otherwise invisible in space. The telescope would be placed on the surface of the Moon, some 239,000 miles away.

Right now, a telescope on the Moon is a dream that remains out of reach, even if it feels closer than ever.

“I’ll be very lucky if I see it launched before I retire ... although I'm not very old,” Bandyopadhyay tells Inverse.

The name of this project is the Lunar Crater Radio Telescope, or LCRT. Bandyopadhyay leads the team in developing the massive telescope.

The LCRT would observe the universe at wavelength frequencies greater than 10 meters, or below 30 megahertz, which are reflected by the layer of ions and electrons in the Earth’s ionosphere — making them largely undetected by humans.

For now, it’s categorized as an “early-stage NASA concept.” But if and when it’s actualized, the ultra-long wavelength telescope will take form as a huge, dish-shaped, wire-mesh antenna suspended in a three-kilometer deep crater on the far side of the Moon. It will let us see further into the universe than we ever could from Earth.

“The Moon is quieter.”

No proposed final cost has been announced for the project by NASA. Currently, the space agency is funding the development of the project as part of its NASA Innovative Advanced Concepts program (NIAC), which “nurtures visionary ideas that could transform future NASA missions with the creation of breakthroughs — radically better or entirely new aerospace concepts — while engaging America's innovators and entrepreneurs as partners in the journey.”

The LCRT is just one of a handful of ideas from researchers who have their telescopic eyes set on the Moon as a lunar vantage point to observe untouched regions of the sky. These ambitious projects still need a lot of time and a lot of money before they are built. But once they spring forth from paper to reality, they could initiate a new era of cosmic observations and discoveries, proving that the future of astronomy might not be on Earth.

Using the Moon as the ultimate base for cosmic exploration, astronomers hope to get close-up images of colossal black hole mergers, detect the mysterious and previously undetectable dark matter, and even discover the early origins of the universe.

On the Moon, there is no atmosphere to reflect those radio wavelengths. And the Moon’s far side is facing away from any interference from Earth. “Earth-based telescopes are all limited by that 10-meter wavelength,” Bandyopadhyay says. “Anything above 10 meters, they can’t see.”

Karan Jani, an astrophysicist at Vanderbilt University, has studied gravitational waves for 14 years. But the search for gravitational waves on Earth has its limits. While missions like the LISA Pathfinder tested the possibility of finding the waves in orbit, Jani wants to take the search to the Moon — and has conducted a series of studies to test the feasibility.

While many objects cause them, the gravitational waves we can currently detect come from the accelerated masses of cosmic beasts like black holes and neutron stars. These send out waves at the speed of light through the very fabric of the cosmos. Scientists can listen in on these echoes through the Laser Interferometer Gravitational-Wave Observatory (LIGO) detectors and the Virgo interferometer, a European observatory that works closely with the U.S.-based LIGO project.

“The question now becomes, what will be the next big detector?” Jani tells Inverse. “In between, there are empty regions that no one detector can listen to, but the Moon is quieter.”

Why build telescopes on the Moon?

Telescopes built on the Moon would be able to look further into the universe's history by cutting out common problems faced by Earth-based astronomers.

For lunar radio telescopes, the Moon would act as a physical shield between the telescope and interference from several sources, including:

The Moon also lacks atmosphere and noticeable seismic noise — a consistent vibration from the ground that makes it just a little too noisy to hear certain frequencies on Earth.

Jani’s concept, the Gravitational-Wave Lunar Observatory for Cosmology, would analyze mergers of black holes, neutron stars, and possibly detect dark matter within almost 70 percent of the entire observable volume of the universe.

The telescope would take advantage of the Moon’s orbit around the Earth to observe the same signal from different locations.

On the Moon, there is no atmosphere to reflect those radio wavelengths. And the Moon’s far side is facing away from any interference from Earth.

Bandyopadhyay’s presentation on Lunar Crater Radio Telescope given to NASA in September 2020.

These two forces emit little to no light, so scientists have not been able to spot them with the telescopes that we have developed so far.

“We want to understand the nature of dark energy,” Jani says. “For that, we have to know the expansion rate of the universe across sizable cosmic history. Hence we need to know exactly where it is coming from.”

“This is going to obviously be a very costly mission.”

Although scientists have never observed them directly, dark matter and dark energy affect the expansion rate of the universe.

“We do not really understand what the universe is made of,” Bandyopadhyay says. “If we can observe this region of the universe, we can piece together what is happening and why dark energy and dark matter are behaving the way they are.”

LCRT would measure the long-wavelength radio waves generated by the few hundred million years after the Big Bang.

How much do lunar telescopes cost?

“This is going to obviously be a very costly mission,” Bandyopadhyay says.

Part of the cost is transporting all of the telescope’s parts to the lunar surface. NASA is currently considering working with SpaceX to deploy up to 100 metric tons per trip.

According to Bandyopadhyay, that’s way more than they would need: He estimates the total weight of the equipment to be around six metric tons.

What’s next — Over the next two years, the LCRT team will continue to develop the project. Then NASA will determine whether they will be selected for further development.

In the meantime, we’ll learn about the universe through advanced yet hindered Earth-bound telescopes (at least, until the James Webb Telescope is launched into space this fall).

“I’m excited to talk more about this and potentially spread the word about these cool ideas to the younger generation because they are the next set of people who would come and take over the mantle after we are gone,” Bandyopadhyay says.