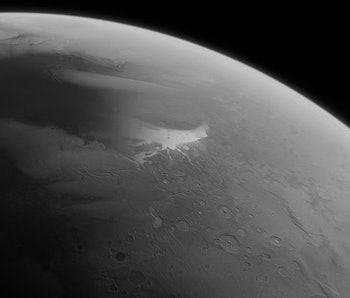 Before it became a dry, desert landscape, Mars was once a wet, likely habitable, environment with rivers and lakes.

The history of Mars’ water has perplexed scientists for years, and many hypotheses have come along in that time to explain how it happened. But maybe all the solutions are a little right — but just not all at the same time.

A team of researchers from France is suggesting a new scenario for how Mars lost its water. Instead of drying up in one go, the team hypothesizes in a new study that Mars fluctuated between dry and wet periods before finally losing its water for good around 3 billion years ago.

And interestingly, the idea doesn’t refute certain causes. Instead, it challenges the kind of time scale it happened across. The study was published Thursday in the journal Geology, and can help us understand the early history of our own planet Earth.

Why did Mars lose its water?

Here’s the background — Mounting evidence suggests Mars was once a wet, warm, and possibly habitable planet.

Over time, the planet lost its water and became the desolate world it is today. Scientists aren’t quite sure how Mars’ water dried up, but there have been a few theories.

The most popular theory suggests that Mars’ water escaped to outer space through atmospheric escape, when a planet loses the gases of its atmosphere, which get sucked away into space.

Scientists believe that Mars’ water molecules may have been lost to space in the same way.

2. Massive dust storms drove it off the world

Another theory suggests that Mars’ water may have been aided by the planet’s dust devils.

Based on data gathered by NASA’s Mars Atmosphere and Volatile Evolution (MAVEN), scientists suggest that dust storms rising from the Martian surface appear to have been slowly sucking away the planet's water over the course of millions of years, sweeping water molecules up on a wild journey into the atmosphere.

Meanwhile, a recent study from March suggests that Mars’ water may not have all escaped into outer space, but rather some of it may have gone underground.

The study suggests that 30-99 percent of Mars’ water may have been buried beneath the surface of Mars, incorporated into minerals in the planet’s crust, becoming a part of the molecular structure of the minerals rather than in its liquid form.

But now, there’s the new paper. It suggests that all of these could be right, just not at the same time.

William Rapin, a researcher at the French National Center for Scientific Research, and lead author of the new study, wanted to explore the geological transitions that took place on Mars in order to reconstruct the history of its water.

Rapin believes that one does not necessarily contradict the other and that perhaps all of these theories tell piece of the larger story of Mars’ water.

“I think they can fit together,” Rapin tells Inverse. “The idea that Mars is dry is not something that has changed, but we don’t have exact details on what happened when the global climate of Mars changed.”

Rather than favoring one scenario over the other, Rapin suggests that all of these elements were at play and ultimately led to Mars becoming the dry desert it is today.

What is the new idea behind Mars water loss?

The world of Mars long ago was likely habitable — which is why the new Mars rover Perseverance has a suite of instruments that will get us closer than ever to confirming if there was life on Mars.

Perseverance is exploring Jezero Crater, a meteorite impact site that later became a lake bed. A few lakes like this exist on Earth today.

“These environments where the water was present may have seen the emergence of life,” Rapin says. “And then something changed in the climate.”

What’s new — Rapin and his team relied on observations made by NASA’s Curiosity rover, which has been roaming the Martian surface since 2012.

Using the telescope on its ChemCam instrument, Curiosity captured detailed images of the steep terrain of Mount Sharp, a mountain at the center of the Gale crater.

How was Mount Sharp on Mars formed?

Mount Sharp appeared to have formed from layers of sediment deposited in a lakebed over tens of millions of years. The observations of the sedimentary beds revealed the conditions under which they formed.

Looking at the images of Mount Sharp, the team noticed radical changes.

Above the base of Mount Sharp, there were wide, tall cross-bedded structures that indicate the migration of dunes that had formed from winds over a period that experienced a long, dry Martian climate.

Above those were thin, alternating brittle sedimentary beds that are indicative of river-floodplain deposits, which would suggest that there was a period where wetter Martian conditions returned.

“We were surprised to find in the images that we collected from the ground that there is this back and forth,” Rapin says.

Therefore, the new study suggests that the climate of Mars likely underwent several fluctuations between dry and wet conditions, with its rivers and lakes filling up with water and then drying up, before it permanently became arid billions of years ago.

Why is water on Mars important?

Why it matters — Of all the planets in the Solar System, Mars is the most similar to Earth. Therefore, revisiting Mars’ history allows us to peer back in time into the history of our own planet.

“There is absolutely no way we're gonna learn about this on Earth because the first billion years of evolution on Earth has disappeared off the record,” Rapin says. “And so we can go to Mars to have a record of what happens on a habitable world that is similar to Earth.”

The new study could also help planetary scientists reconstruct the timeline by which Mars lost its water. If it was gradual, it may be that one scenario happened before the others — or even paved the way for one to cause the next.

Although the study relied on data gathered by the Curiosity rover, the team is also anticipating new data to be gathered by Curiosity’s recent companion on Mars.

Will Mars Perseverance look for water on Mars?

What’s next — On February 18, NASA’s Perseverance rover landed on Mars to begin its mission of searching for clues of ancient life. Perseverance will explore Jezero Crater, a dried-up, ancient lake that may have once housed microbial life billions of years ago.

Exploring Jezero Crater will provide scientists with more clues since that environment used to house water billions of years ago.

Both Jezero and Gale formed from the same geological period of Mars, the era where the planet’s climate had begun to shift.

Abstract: The Curiosity rover is exploring an Hesperian-aged stratigraphy in Gale crater, where a transition 19 from clay-bearing units to a layered sulfate-bearing unit has been interpreted to represent a major 20 environmental transition of unknown character. Here we present the first description of key facies in 21 the sulfate-bearing unit, recently observed in the distance by the rover, and propose a model for 22 changes in depositional environments. Our results indicate a transition from lacustrine mudstones 23 into thick aeolian deposits, topped by a major deflation surface, above which strata show 24 architectures likely diagnostic of a subaqueous environment. This model offers a reference example 25 of a depositional sequence for layered sulfate-bearing strata, which have been identified from orbit 26 in other locations globally. It differs from the idea of a monotonic Hesperian climate change into long27 term aridity on Mars and instead implies a period characterized by multiple transitions between 28 sustained drier and wetter climates.